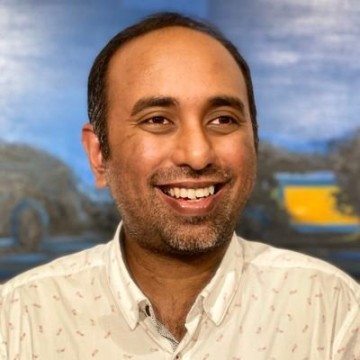 Nabeel Ismeer
Renewable Energy Professional
We have read the articles, “6 things you can do for the climate,” or “10 ways to reduce your impact,” or the Conservative “They are coming for our burgers.” The ideas are pretty standard, don’t eat meat, don’t drive, and don’t have kids.

Apart from being a list of don’ts, which adults have famously been prone to ignoring, sometimes these lists of simples have a bit of a condescending tone, like “You civilians take the bus, while we stop CO2zilla.”

Governments, corporations and environmental organizations have been put forward as humankind’s last standers. CO2zilla has been a little more difficult to tame than expected. Nationalists have proven a surprising antagonist to climate accords. Companies are still busy buying back stocks. And the greenies have resorted to chaining themselves to busses.

We know this is the monster driving human caused climate change (thanks Scientists). 70% of its food comes from twenty companies like Saudi Aramco, Exxon and the like. But that’s not really who CO2zilla is (contrary to “you are what you eat.”) Maybe its identity is hidden in what it does - 40% electricity generation and 20% transport. Electric companies like SGCC of China, AEC of America and Origin Energy of Australia. Car companies like Volkswagen that flout emissions rules, and city transport infrastructure that remains fossil fuel (FF) powered.

What could be argued is the people, you and I are CO2zilla. But that’s not entirely correct - I have never met anyone who consumes fossil fuels as a product, unless they are looking for an alternate alcohol. What people want is energy, whether to electrify their rides, to light up their homework assignments, or cool down that beer (or fossil fuel beverage).

There is a middle line where the companies regulate and cut their emissions. But bottom line, we are asking these companies, many of them fossil fuel behemoths, to forget their top line. Companies might talk about serving a human purpose, like making slavery-free clothes, or beef that did not burn down the Amazon, or insurance that was not allergic to claims, but they can’t (won’t) run away from that necessity of making money.
In fact, a lot of these companies have done the opposite of help, spending money to lobby politicians into climate inaction and even into further subsidizing fossil fuels and misleading the public on the science of the climate change.

We have an idea of who CO2zilla is, so what do we do?

Surely, we can’t convince the other seven billion of us to do something? For starters we do not need seven billion people. In an earlier article I argued that it was the global top 1% of income earners that caused and could influence the solution of climate change. Even if you took that number as a billion (as per the late great Hans Rosling), these are still the people flying around, driving cars and using energy intensive appliances. But more importantly these are the same people who can get their companies to use renewable energy, or influence governments to act as officials and through voting and lobbying.

Between the individual and the government/corporation, there is a huge spectrum of activism available at our disposal. The building manager pushing for solar on his factory’s roof, the salesman asking his team to choose the train over plane, the architect using wood to build his tower, and a sparkly eyed Greta standing out alone in the cold in front of parliament urging action.

If we really are to influence electricity and transport we have to get our governments to act. Part of it can be changing the way our companies are run. But governments need to step up.

The influence of the individual tends to look like this:

But based on who CO2zilla is shouldn’t this triangle of effort look like this? 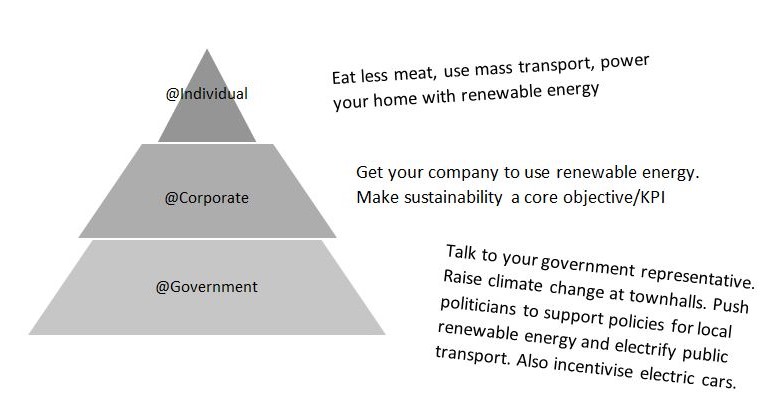 And we don’t need to get everyone to act immediately, as we have seen in renewable energy, just the adoption of solar and wind in Germany and a few other European nations was enough to push these sectors into the fastest growing energy suppliers in the world.

We only need a threshold number of people to carry out a threshold amount of action. The scaling up of things is a human story, how cars replaced horses, how computers replaced typewriters, and how Starbucks replaced reasonably priced coffee. So no, we do not need everyone to be on board for our fight on climate change to work.

Just look at Sterling, Massachusetts, a small town in the US, adopting a microgrid system that will pay for itself in 8 years while giving them more energy independence, or Feldheim, Germany which is 100% renewable powered, or Shakimali Matborkandi, a village in Dhaka trading solar power over the internet. Our decarbonization is happening. Our energy liberalization is happening.

Sure, the fossil fuel interests outspent environmental groups advocates 10 to 1 from 2000 to 2016, but while they may have dollars, we have Greta. And recently it seems the Bill Gates has overcome his nuclear inertia to endorse wind and solar, with storage. We need to leverage their voices, on traditional and social media, getting more people to act and further influence their leaders.

We need to step up, on behalf of those who can’t respond, who are distracted from the issue and even those who are actively fighting for fossil fuels, because climate change is affecting us already. From worsening refugee crises to insurance collapses collapsing financial markets to potential wars, why are we even risking this, for what?

Renewable energy is the cheapest electricity now. RE plus storage at cost parity to coal power are already being deployed in places like Los Angeles. We have the technology at the right price. The only real remaining lifeline for CO2zilla is the FF BFF’s that somehow remain entrenched in government. We have to let our representatives know that we have to stop using fossil fuels and if they don’t listen we have to vote them out.

I will leave you with a final question. Why are we voting in politicians who do not take this seriously? In general big energy and transport align with politicians who want to cut taxes and deregulate the private sector. Higher income earners tend to vote on “fairly narrow economic self-interest.” People in higher income brackets also vote overwhelmingly more than lower income brackets. Maybe it’s time for us to take long hard look at our tax rebate, and ask if that really is worth going against the advice of the IPCC, NASA, and basically every other relevant scientific organization on earth. To defeat CO2zilla we need to stop looking at the zeros and turn into heroes.

Nabeel Ismeer is a renewable energy professional based in South East Asia. He has experience executing and developing a combined 300 MW of Solar PV capacity from Saudi Arabia to Australia. He also writes fiction around characters fighting climate change and racism. His book “The Hunter’s Walk,” will be out mid 2021.