Hannah Steiner
marine wildlife conservation and environmental activist
World Wetlands Day is held every year on the 2nd of February to raise global awareness on the value of wetlands for humanity and the planet.

World Wetlands Day marks the signing of the Convention on Wetlands, called Ramsar Convention, on 2 February 1971, in the Iranian city of Ramsar on the shores of the Caspian Sea. The Convention uses a broad definition of wetlands. This includes all lakes and rivers, underground aquifers, swamps and marshes, wet grasslands, peatlands, oases, estuaries, deltas and tidal flats, mangroves and other coastal areas, coral reefs, and all human-made sites such as fish ponds, rice paddies, reservoirs and salt pans.

World Wetlands Day was first celebrated in 1997. Since then government agencies, non-government organizations and community groups have celebrated World Wetlands Day by undertaking actions to boost public awareness of wetland values and benefits and promote the conservation and wise use of wetlands. These activities include seminars, nature walks, and festivals, announcement of new Ramsar sites, newspaper articles, radio interviews and wetland rehabilitation. The World Wetlands Day theme for this year is “Wetlands and Climate Change”. Wetlands play a critical role in storing carbon and reducing the impact of extreme weather events associated with climate change. They store floodwater and can protect coastlines from storm surges.

Wetlands are land areas that saturated by surface or groundwater, it occurs in two different forms, permanent or seasonal. Wetland is an area of mainly saturated soil that can support the prevalence of hydric soil adapted plants. Wetlands are perfect combination of water and land, and one the most biologically diverse ecosystems in the world. There are many kinds of wetlands, including swamp, marsh and bog which filled with trees, grasses, shrubs and moss. Wetlands exist in every country and in every climatic zone, from the Polar Regions to the tropics, and from high altitudes to dry regions.

As we said, there are many different types of wetlands that occur all over the world. We are going to explain four important wetlands and where they are placed.

Natural process of decaying vegetation filling older kettle ponds or lakes and it creates bogs. Bogs have unique soils that are highly acidic and largely derived of nutrients and oxygen. Historically, bogs have been readily depreciated and are highly threatened wetland systems. These wetlands are fantastic for preventing downstream flooding since they absorb precipitation as it falls and prevents the swelling of rivers and other waterways.

A type of wetland ecosystem classified by peaty soil, dominated by grasslike plants, grasses, sedges, and reeds. They are alkaline rather than acid areas, the most important places for receiving its water are surface and groundwater sources. Like bogs, fens are beneficial because they can help prevent the flooding of land elsewhere, since they soak up water from the ground and prevent it from seeping anywhere else.

A frequently inundated wetland characterized by grass-like and other emergent vegetation adapted to saturated soil conditions. Marshes can be freshwater or saltwater and amount of water in the marsh can change with the seasons. Typical marsh plants include rushes, reeds, sedges, cattails, and grasses. They are wet areas which can be periodically covered by standing or slow-moving water and are usually associated with ponds, rivers, streams, inland lakes, and the Great Lakes. Although some marshes have sandy soils, marshes usually have finer textured, nutrient rich soils with a high content of organic matter.

Swamps are totally different from marsh. They are dominated by woody plants (rather than soft-stemmed plants). Many of these trees are often harvested by people from all over the world to make timber and to build their homes, which can affect the ecosystem drastically if too many are taken without being replaced with new saplings. 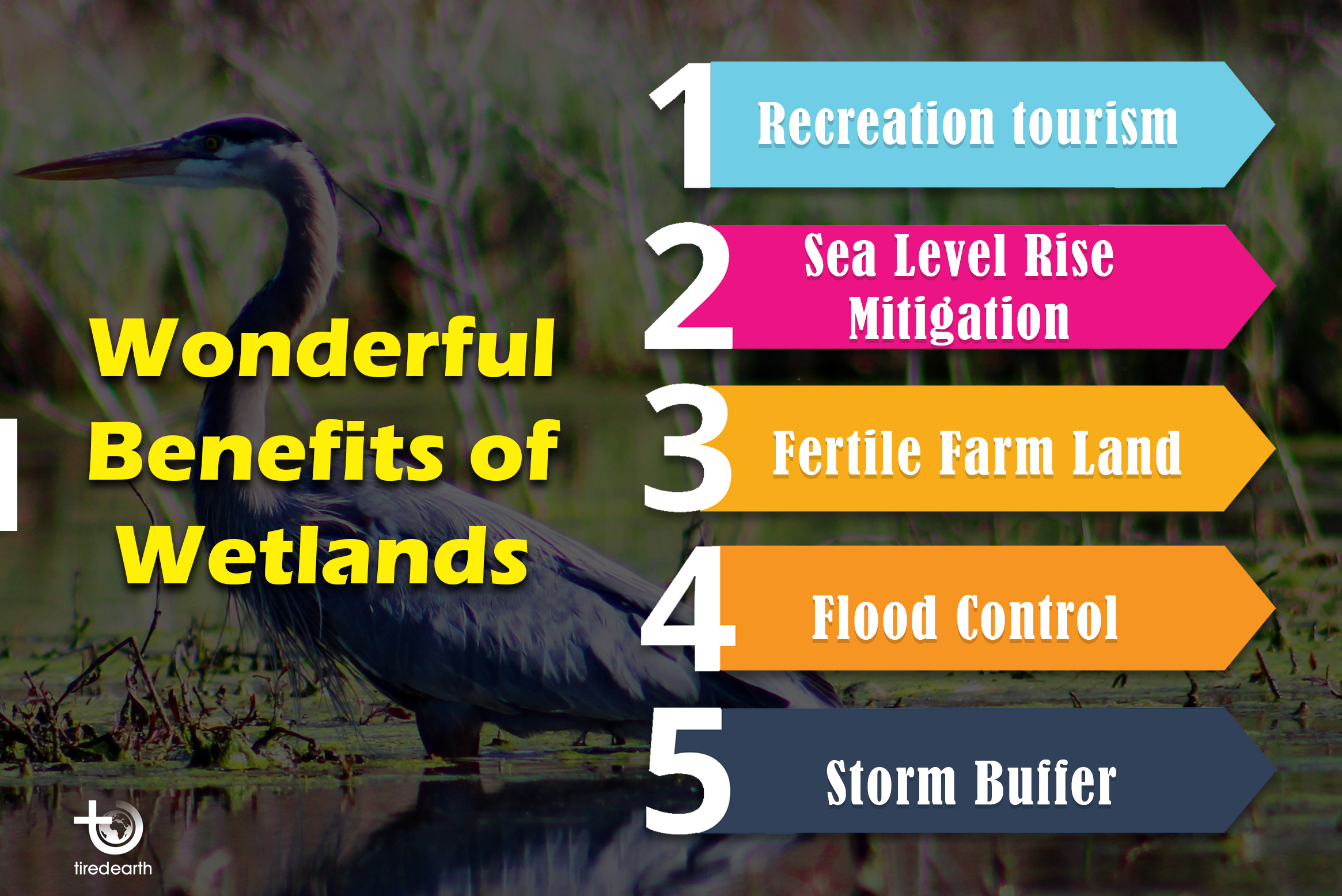 Wetlands are vital for human survival. They are among the world’s most productive environments.

These benefits become increasingly significant as we continue to lose wetlands throughout the world.

Wetlands has huge impacts on water supply, serving as reservoirs for the watershed and releasing retained water into surface water and ground water. They also improve water quality. As water moves into a wetland, the flow rate decreases, allowing particles to settle out.

Wetlands are also important to prevent flooding, as they can absorb heavy rain and release water gradually. Downstream water flows and ground water levels are also maintained during periods of low rainfall. Wetlands help stabilise shorelines and riverbanks. In fact, they control floods much more effectively and efficiently than any floodwall.

Many wetland plants and animals have specific environmental needs. They are extremely vulnerable to change. Some of our endangered plant species depend on wetlands. Most freshwater fish are considered wetland dependent. Many fishes directly rely on wetlands for some point in their life cycle. Fish feed in wetlands or on food produced there. Wetlands serve as nursery grounds for many species whose young take cover there, and many important sport fishes spawn in or near wetlands.

If trees are the lungs of the planet, then wetlands are its kidneys. Because the soils found in wetlands can store carbon for hundreds of years, they play an important role in fighting climate change.

Salt marshes, Riparian wetlands, and marshes located at the margin of lakes protect shorelines and stream banks from erosion. The roots of wetland plants hold soil in place and can reduce velocity of stream or river currents.

Wetlands are one of the most dynamic types of landscape. Nowadays, wetlands across the world are subjected to many threats. They have been mentioned below:

Concern about pollution in wetlands is growing every day, affecting drinking water sources and biological diversity. Run-off from fertilized crops and pesticides used in industry introduce nitrogen and phosphorous nutrients and other toxins like mercury to water sources. These chemicals can affect the health and reproduction of species, posing a serious threat to biological diversity.

Excessive drainage at the verge of wetland can cause a drop in its water level. This can stop the formation of peat and changes the types of plants that grow there. It is not only drainage of wetlands or near wetlands that can affect their water levels. Changes further upstream, such as damming or channeling waterways, can change how much and when water reaches a wetland.

Commercial development like tourism or agriculture land are major threats to wetlands. In addition, unwise use of freshwater to feed these developments poses a further threat. In all too many places, the amount of water being taken from nature's underground aquifer is far outstripping its ability to replenish itself. The result is that as the water level drops, millions of trees and plants are dying because they are deprived of their life-sustaining supplies.

Most river valleys have roads. These structures squeeze rivers by narrowing the floodplain. This destabilizes the river which has less room to meander and therefore has an excess of energy. The roads and railroads also affect drainage from uplands onto the floodplains, and many are built on top of areas that once were wetlands.

Climate change has a great impact on wetlands like any other habitant. In places where the temperature increase is raising the sea levels, the coastal wetlands are being submerged or drowned. In other places where higher temperatures are triggering droughts, the wetlands are also drying out. Thus, wetlands are getting lost both due to higher and lower water levels induced by the varying effects of climate change in different parts of the world.

Alien invasive species have had severe impacts on local aquatic flora and fauna, and can upset the natural balance of an ecosystem. “Alien" invasive species is believed to be one of the greatest global threats to native fish communities and their freshwater ecosystems. Whatever the source, many of these aliens have caused problems worldwide, including the destruction of habitat, introduction of disease and parasites, and predation on or competition with native species of fish.

After all, Wetlands are a natural safe guard against disasters and help us cope with extreme weather events. Well managed wetlands ensure communities are resilient and can bounce back from disasters.

How Climate Change Will Affect Plants