Cigarette smoking causes environmental pollution by releasing toxic air pollutants into the atmosphere. The cigarette butts also litter the environment and the toxic chemicals in the remains seep into soils and waterways therefore causing soil and water pollution respectively. Animals and plants that come into contact or absorb the toxic substances from the cigarette residues are affected as well.

As such, it’s not only the cigarette smoke that causes manifold impacts on people and the environment but also the cigarette butt and other wastes released during the entire production process of cigarettes. Interestingly, when people hear about cigarette smoking, they often think of the health risks it has on the human body. Many fail look at the critical side topic which pertains to how it harms the environment.

Some facts about environmental damages of tobacco

Here’s a couple of mind-numbing facts about smoking and the extent of environmental damage and pollution it causes:

Tobacco is a very sensitive plant that requires a lot of tending. Due to the fact that it’s also often grown as a monoculture it leaves the soil on which it has been cultivated completely drained of nutrients. Tobacco requires six times more potassium than most other cultures and once the soil has been drained of it, tobacco can no longer grow there – neither can most other plants.

Currently, 5.3 million hectares of fertile land is used to grow tobacco. That land had to be cleared of trees – and more trees will be cleared in the future as thousands of hectares become unsuitable for tobacco manufacture. Trees are also cut for the purpose of curing tobacco. Curing is a process of drying out tobacco leaves and it is estimated that close to 50 million trees are cut down every year for that purpose.

Those 5.3 million hectares of land could produce enough food to feed up to 20 million people. To make matters worse, largest tobacco manufacturing countries have undernourishment numbers that go up to 27%. In Sri Lanka alone tobacco has replaced edible food farming almost completely as it’s viewed as a more lucrative crop. An average tobacco farmer in Kenya will take home $120 per year after covering all the expenses. That amount of money is barely enough to put food on the table – especially when you realize that labor costs are not something that that farmer has calculated into his bottom line.

The entire process of cultivating, curing, and transporting tobacco needs the use of large amount of chemical and other toxic materials. At the same time, the production process generates huge amounts of wastes such as harmful chemical pesticides and fertilizers. One of the habitually used substances in the production process is known as Aldicarb. It’s highly toxic to humans, plants and animals and can seep into waterways and intoxicate the soil for several years.

Other toxic wastes generated from cigarette production include dithane DF, imidacloprid, 1, 3 — dichloropropene, chlorpyrifos and methyl bromide which can harm plants, humans and animals. In as early as 1995, it was reported that nearly 2300 million kilograms of manufacturing waste is generated from cigarette manufacturing process annually including an additional 209 kilograms of chemical waste.

The high scores of pesticides, fertilizers and other chemicals used in the cultivation of tobacco introduce volumes of hazardous pollutants to the land and soils. These chemicals accumulate and eventually hamper the fertility of the soils and make the lands unsuitable for supporting any other crop.

Most of the ingredients present in cigarette butts, on the other hand, are non-biodegradable and take years to break down.

The filters are made of cellulose acetate, sourced from plastic, are photodegradable – can be broken down by UV light but still take an extended period to break down. The ingredients in the filter therefore remain in the soil for a long period of time, up to 10 years as estimated by researchers. As long as they are present in the soil, the soil remains polluted. 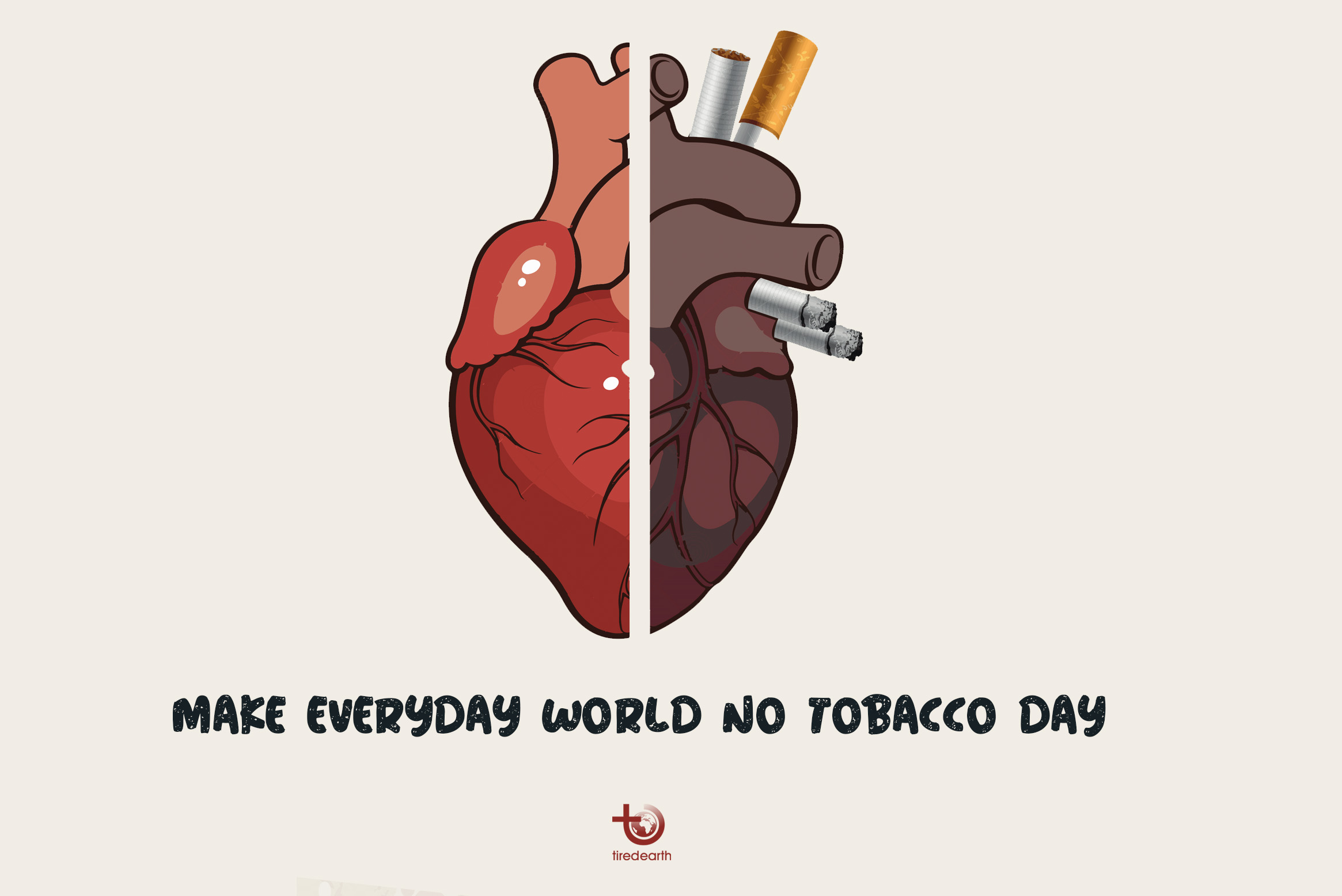 The production of cigarettes also poses a threat to a sustainable future, particularly through catastrophic deforestation. It is estimated that 2–4% of global deforestation is attributed to tobacco production. When tobacco is being produced, land cleared to make room for tobacco crops and even more trees are clear-cut in order to dry and cure the tobacco leaves. In total, it is estimated that 600 million trees are cleared and burned annually, mostly in underdeveloped nations where tobacco is primarily produced. This is a tragic loss of valuable ecosystems and animal habitats, as trees are vital in the absorption of carbon dioxide to produce clean air, safe for humans. In fact, the annual loss in trees due to tobacco production is the equivalent to burning approximately 2.8 billion gallons of gasoline — this is a major obstacle in producing a sustainable future, with clean and safe air quality.

Farming also uses a surprisingly large amount of wood, rendering tobacco a driver of deforestation, one of the leading causes of climate change.
About 11.4 million metric tonnes of wood are utilized annually for curing: the drying of the tobacco leaf, which is achieved through various methods, including wood fires. That's the equivalent of one tree for every 300 cigarettes, or 1.5 cartons.
This adds to the impact of plantations on forest land, which the study describes as a significant cause for concern, citing "evidence of substantial, and largely irreversible, losses of trees and other plant species cause by tobacco farming."

Tobacco and Threats to Wildlife

Deforestation is the largest human-driven cause of specific ecosystem destruction.

When forests get cleared to make room for tobacco plants, all creatures have to evacuate the habitat they call home. All nests or burrows get destroyed and wildlife have to abandon their habitats. This leads to decreased biodiversity of the ecosystem, as well as the potential for species to become endangered or extinct.

Cigarette pollution in the environment also affects the lives of animals. When Cigarette butts and packaging end up in the environment, animals are at risk of consuming them. When this pollution gets consumed, its chemicals enter the animal’s bloodstream.
The chemicals act as a poison and could end up killing them. Additionally, this debris cannot be digested by animals. When consumed, the debris gets trapped in the animal’s stomach. This impacts the way the animal eats and can lead to the inability to absorb nutrients.

Animals of the waterways take the brunt of the impact when it comes to water pollution from cigarette butts. Toxins such as nicotine, pesticides, and metals seep into the ecosystem. The water then becomes toxic to fish and other organisms in that aquatic ecosystem.

The chemicals from a single cigarette butt release enough toxins to kill 50 percent of fish exposed to it for 96 hours. This study was done with one cigarette in one liter of water for 24 hours.

To get an idea of what that means on a larger scale, there are hundreds of thousands of cigarette butts in the ocean. This pollution soaks for years and releases harmful toxins into the water. When aquatic animals come in contact with the contaminated water, it could kill them. This contaminated water can also destroy coral reefs and other smaller aquatic water-life. Chemicals are not the only way cigarettes impact aquatic animals.

Cigarette butts look like insects, and small fish will consume them because they cannot tell the difference. These butts stay in the animal’s stomach, limiting their stomach capacity and changing their eating habits.