The world celebrates Global Tiger Day on July 29th to show our collective support for the magnificent yet endangered big cat.

This day was founded 7 years ago, when the 13 countries where wild tigers still roam, came together to find ways saving tigers. The International Tiger Day (also known as Global Tiger Day) is celebrated to raise awareness for tiger conservation. The tiger is the largest of the world’s big cats and this magnificent creature, with its distinctive orange and black stripes and beautifully marked face, has a day that is dedicated to it. As I mentioned, this was first celebrated in 2010 and was founded at an international summit that had been called in response to the shocking news that 97% of all wild tigers had disappeared in the last century, with only around 3,000 left alive. Tigers are on the brink of extinction and International World Tiger Day aims to bring attention to this fact and try to halt their decline. Many factors have caused their numbers to fall, including habitat loss, climate change, hunting and poaching and Tiger Day aims to protect and expand their habitats and raise awareness of the need for conservation.
Why should we save tigers?
At the turn of the 20th century, it is estimated that India probably had many thousands of tigers in the wild. Based on a census using the pug mark technique, the number of tigers in 2002 stood at 3,642. As per the 2008 tiger estimation exercise conducted by WII in association with the NTCA using camera traps, there were only 1,411 tigers left in the wild in India.
The tiger is not just a charismatic species or just another wild animal living in some far away forest. The tiger is a unique animal which plays a pivotal role in the health and diversity of an ecosystem. It is a top predator which is at the apex of the food chain and keeps the population of wild ungulates in check, thereby maintaining the balance between prey herbivores and the vegetation upon which they feed. Therefore, the presence of tigers in the forest is an indicator of the well- being of the ecosystem. The extinction of this top predator is an indication that its ecosystem is not sufficiently protected, and neither would it exist for long thereafter.
If the tigers go extinct, the entire system would collapse. For e.g. when the Dodos went extinct in Mauritius, one species of Acacia tree stopped regenerating completely. So when a species goes extinct, it leaves behind a scar, which affects the entire ecosystem. Another reason why we need to save the tiger is that our forests are water catchment areas.
Therefore, it’s not just about saving a beautiful animal. It is about making sure that we live a little longer as the forests are known to provide ecological services like clean air, water, pollination, temperature regulation etc.
Temperatures in tropical rainforests are estimated to increase by about 4 degrees celcius (7-8 degrees Fahrenheit) in the next 100 years, and many scientists are predicting even higher numbers. Likewise, many scientists predict that the tropical rainforest will become a lot drier and more seasonal. Higher temperatures and less rainfall will make it a lot harder for plants to get water which will eventually kill off heavily dependent plants, and trees will grow shorter. Some models even predict that about 50% of tropical plant and animal species will go extinct over the next 100 years due to the harsh new conditions.
In order to survive the increased temperature, the Bengal Tiger would have to have lose alot of its fur. Likewise, it would need a better internal cooling system and water storage system. By making these adaptations, the tiger would be able to keep cool and hydrated to continue to survive. 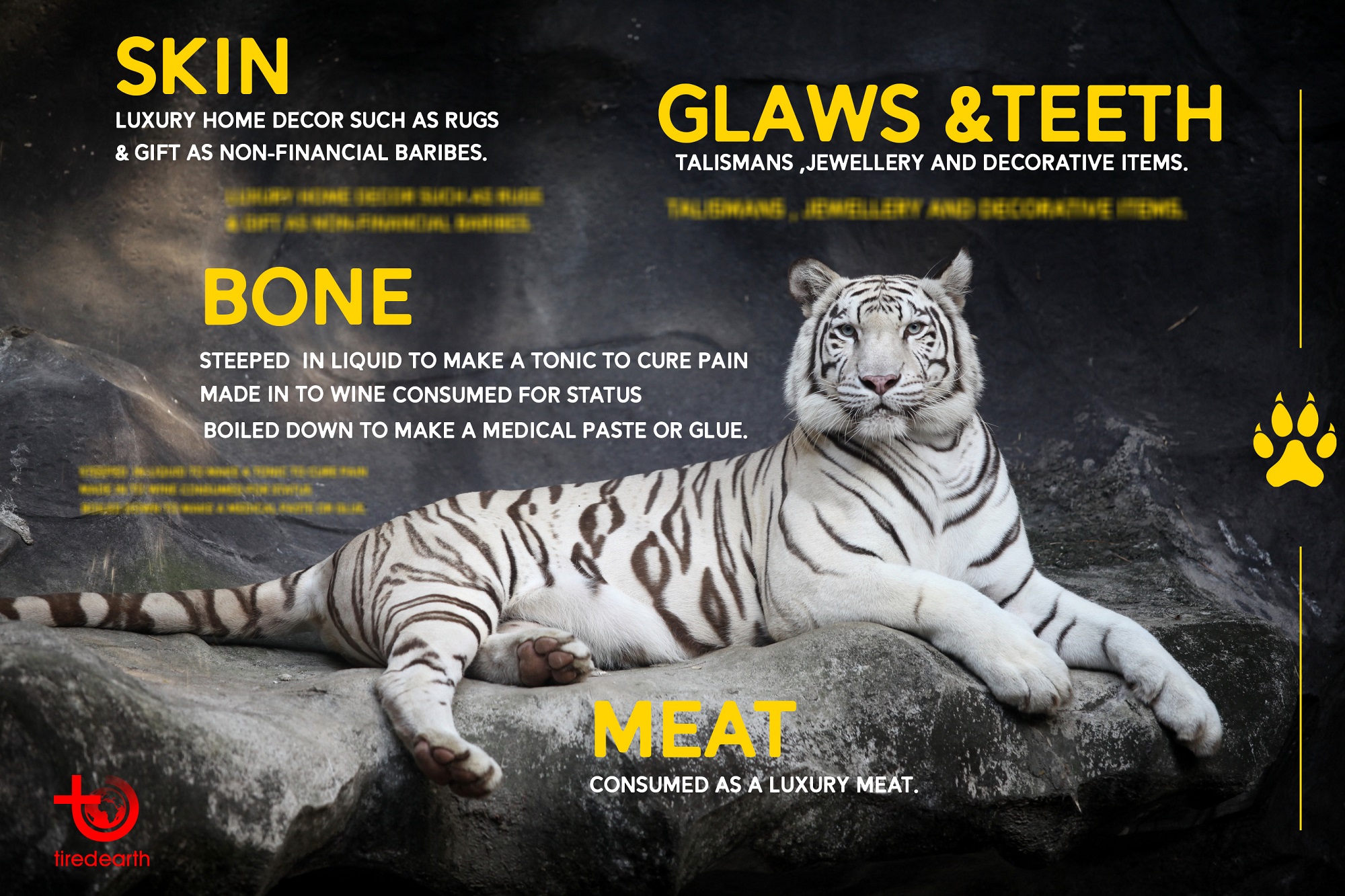 Climate change
In the past century, 97 percent of the world’s tiger population has vanished and this is due to Poaching, deforestation and development have driven this sharp decline. Now, from the pine forests of Russia to the rainforests of Indonesia, a new threat looms for these remaining tigers: climate change.
1. Rising sea levels
In India and neighboring Bangladesh, rising sea levels are shrinking coastal habitat for hundreds of endangered Bengal tigers that rely on the area’s mangrove forest, the largest in the world. Higher waters erode this patchwork of islands, called the Sundarbans, and cause salt water to migrate into fresh water, polluting the tigers’ drinking source. Tigers must find new freshwater sources and move to higher ground, escalating conflicts with communities living there.
2. Deforestation
Cutting down forests accelerates climate change while pushing species like the critically endangered Sumatran tiger to the brink of extinction. Unsustainably cultivated palm oil plantations are fast replacing Indonesia’s forests. This deforestation destroys important habitat, and could leave Sumatran tigers more vulnerable to illegal wildlife trafficking.
Keeping Indonesia’s forests intact helps protect tigers and address the impacts of climate change. CI is working in Indonesia, Brazil and other key palm-oil-producing countries to keep deforestation out of palm oil supply chains.
3. Temperature changes
Shifting temperatures are altering habitat for Siberian tigers in Russia and China, as Korean pine forests give way to fir and spruce trees — meaning less prey for hungry tigers that prefer to hunt in pine forests. Fewer than 600 Siberian, or Amur, tigers remain, heralding the possible extinction of the world’s largest cat within the next 100 years.
4. Natural disasters
As climate change accelerates, scientists predict more frequent wildfires in the remote regions where Siberian tigers live. Longer, hotter and drier wildfire seasons are the new reality, threatening Siberian tiger habitat and food supplies.

Climate change also drives more intense storms and flooding that ruins crops, forcing people to travel farther from their homes and into tiger territory to make a living. In the Sundarban Islands, human-tiger conflict can result as displaced farmers gather seafood and honey in the same mangroves where tigers roam.
Climate change is threatening the habitats and food sources of tigers, making them vulnerable to poaching and to conflicts with communities. In many cases, protecting tigers — specifically by preserving their habitat, which is often forest — also helps combat climate change. By keeping forests standing, we’re giving tigers a fighting chance. 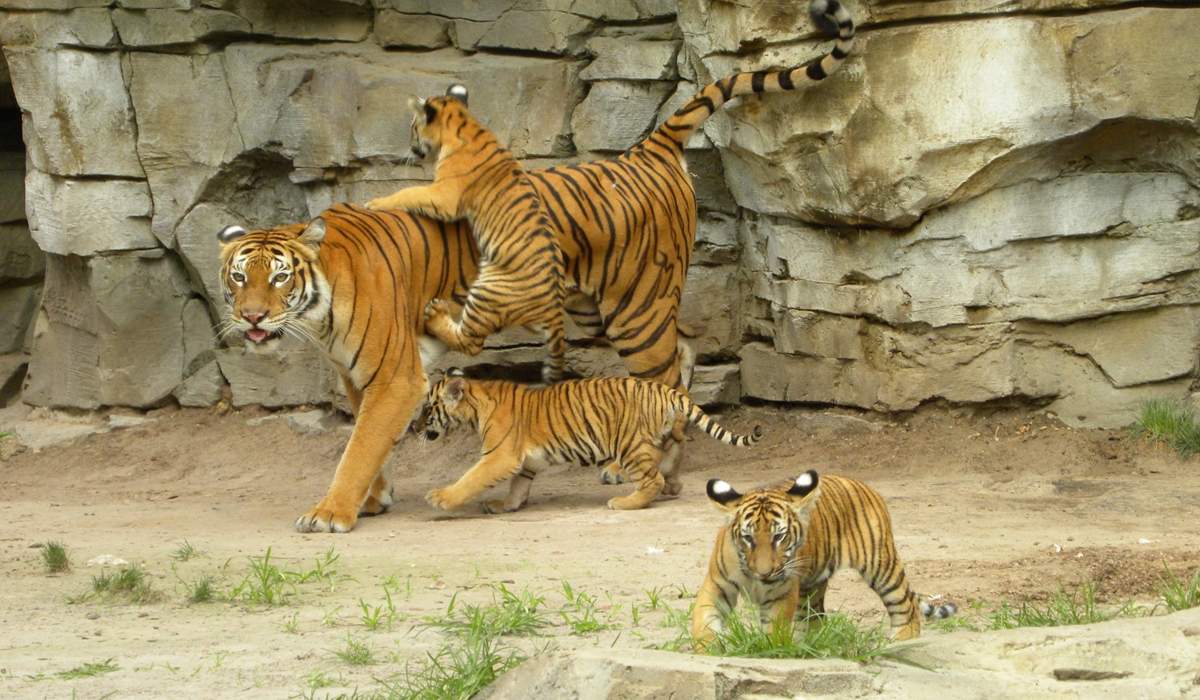 Saving animals through religions
Famous religions can play a serious role in saving animals specially extinguishing animals like tigers. All religions make a big limitation on hunting animals specially Islam. All living beings – humans, birds, animals, insects etc – are worthy of consideration and respect. Religions has always viewed animals as a special part of God’s creation. Mankind is responsible for whatever it has at its disposal, including animals whose rights must be respected. However, without doubt religions have helped saving animals by encouraging their followers to avoid poaching and respecting them.
Christian view:
Many people say that when God created animals, he made them to be less significant than humans and that they were there solely for human usage. Christian thinkers believed that human beings were greatly superior to animals. They taught that human beings could treat animals as badly as they wanted. This however is not the sole feeling.  Modern Christians generally take a much more pro-animal line. Nowadays it is generally suggested that it is allowed to make some use of animals, but always bearing in mind that they have value to God. Christians started to show some compassion for animals after a few Christian saints preached to animals such as, St Antony of Padua who preached to fish and St Bridid who protected Cows. St Francis of Assisi was one of the main saints who preached to the birds and became the most popular pro-animal Christian figure. So it stands, we have two very different strands of Christian thought. One permits hunting and complete domination of all of God’s creatures. The other considers the fact that hunting is unfair to the animals. Of coarse many of the Christians that are for the most part against animal rights when it comes to eating meat are against hunting animals for sport as they feel it is cruel and unfair. Today that is the general feeling among Christians who believe mainly the God created everything including animals and that they should be shown compassion just like humans. Although there is nothing in the bible that say there is anything wrong with animal hunting, it is a moral decision that most Christians decide against.
Islam view:
The Holy Qur’an, the Hadith, and the history of Islamic civilization offer many examples of kindness, mercy, and compassion for animals. According to Islamic principles, animals have their own position in the creation hierarchy and humans are responsible for their well-being and food.
Islam strongly asks Muslims to treat animals with compassion and not to abuse them. The Holy Qur’an states that all creation praises God, even if this praise is not expressed in human language. "And the earth, He has assigned it to all living creatures" (Qur'an 55:10).
Prophet Muhammad (Peace Be Upon Him) often chastised his Companions who mistreated animals, and spoke to them about the need for mercy and kindness. “Whoever is merciful even to a sparrow, Allah will be merciful to him on the Day of Judgment.” “A good deed done to an animal is like a good deed done to a human being, while an act of cruelty to an animal is as bad as cruelty to a human being.” The Messenger of Allah (SAW) once passed by a camel that was so emaciated that its back had almost reached its stomach. He said, “Fear Allah in these beasts who cannot speak.” (Abu Dawud) Humans were created by Allah, the Almighty, to be custodians and guardians of the Earth. Killing without need- that is killing for fun- is not permissible. The Companions said,”O Allah’s Messenger! Is there a reward for us in serving the animals?” He replied: “There is a reward for serving any living being.” In Islam, hunting for sport is prohibited. Muslims may only hunt as is needed to meet their requirements for food. This was common during the time of the Prophet Muhammad, and he condemned it at every opportunity.
In the Islamic religion, the people are only allowed to hunt for food and under no circumstance for sport. Muslims believe that all living creatures were made by Allah and that he loves all animals as they exist for the benefit of human beings and they must be treated with kindness and compassion. According to Islam, permission to hunt is only granted under the strict condition that God be remembered while taking such life, the slaughterer must say the name of Allah before making the cut to the animal’s throat. But yet again this only refers to hunting for food, not for sport which is completely disallowed.
So in conclusion you can see that most religions are against all forms of animal hunting. More traditional believers of their religion are more likely to be for it. But as times have moved on and many new laws have been put into place, the views on hunting have become a lot more compassionate. So people who were previously for hunting have had to change their opinions as it is less expectable in society today. All the Gods encourage respect for all life, but animals are still seen as been the under dominant being.