Rosmel Rodríguez
PhD student O Centro de Estudos Sociais da Universidade de Coimbra
Climate change is a problem of global governance and we should all raise our voices against this situation, because it goes against the respect of the biophysical limits of the planet.

Recently we have seen in almost every newscast in the world the events occurred by the protests carried out by Just Stop Oil.

The media have echoed this news, achieving a worldwide impact, becoming trending topic, but unfortunately the focus of the news was based on the action of the protest (demonstrations in the streets, pouring food on valuable works of art and painting facades of public buildings) and not on the message they want to convey.

There are many of us who understand that actions against works of art is not the best way to demonstrate and even less to draw attention, because they have generated much social rejection, which greatly detracts from the struggle in climate action, although the works of art were not damaged, these demonstrations.

Before pointing out and judging these actions by Just Stop Oil, we have stopped to think about
Why are they protesting, why are they acting with such racialism, why are they being demonized by the media?

Just Stop Oil is demonstrating in the United Kingdom for a simple demand, its activists are asking the British government to reverse its intention to authorize more than 100 new oil and gas exploitations in the North Sea.

These new developments go against the Paris Treaty, which the British government signed and is in breach of, even though it has stated that it will keep its commitment to reach the net-zero target by 2050.

For this reason, scientists and environmental activists of Just Stop Oil, in their desperation because this issue does not go unnoticed, carry out this type of actions, which seek to viralize the problem of this great problem that is the ecological crisis and expose the helplessness that we should have, because nowadays we know with scientific basis the planetary implications of this crisis, and it is surprising that even the States are not taking measures of real impact to mitigate the effects of climate change, it has not yet transcended the discourse or plans and strategies that have little or almost no impact on the sources that cause this global problem.

If you were an environmental activist, scientist, what would you do about it, taking into account that the scientific community as a whole has pointed out with irrefutable evidence that the increase in the extraction and production of fossil fuels and derivatives are totally incompatible with achieving the goal of containing global warming below 1.5 °C. 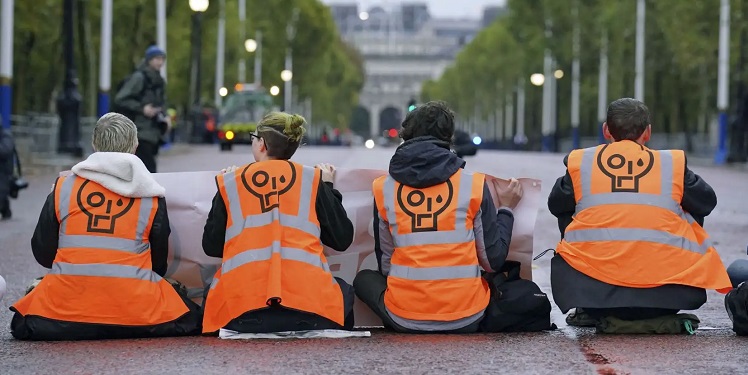 I believe it is necessary to point out that allowing these new developments in the UK could create a precedent for other countries to act in the same way under pressure from lobbyists and the much-needed Paris Agreement will simply remain one of the many agreements that have remained unfulfilled.

With this in mind, the actions of the British government to allow new oil and gas exploitation in the North Sea should be a global scandal, it is not just a problem of the British people, climate change is a problem of global governance and we should all raise our voices against this situation, because it goes against the respect of the biophysical limits of the planet.

The environmental activists and scientists of Just Stop Oil are being branded as radicals who threaten society and are nothing more than people driven by a deep sense of defense and protection of life who in their desperation to preserve environmental harmony on the planet have held demonstrations to draw attention and expose their demands to the world, But the media that respond to the interests of big capital have only shown the part of these events that suits them, and it must be made very clear, the radicals that threaten the planet and all forms of life are those companies and governments that do everything possible to continue in the current model of production and mass consumption that has brought us to this ecological crisis.

...the Suffragettes didn't accomplish anything through Civil Disobedience...they had to go further; perhaps, so must we?

please help stop the destruction of our planet