Liang Lan
Marine and Environmental Scientist
Overpopulation is one of the biggest challenges humanity is facing and threatens the near future of the planet in economic, environmental and social terms.

The current population of the Earth is over 7.6 billion people and growing. It could reach 8 billion by 2025, 9 billion by 2040, and a whopping 11 billion by 2100. Population is growing rapidly, far outpacing the ability of our planet to support it, given current practices.

Overpopulation is associated with negative environmental and economic outcomes ranging from the impacts of over-farming, deforestation, and water pollution to eutrophication and global warming. While a lot of positive steps are being taken to better ensure the sustainability of humans on our planet, the problem of having too many people has made lasting solutions more challenging to find.

Taking into account the fact that human beings appeared on Earth more than four million years ago, what happened in our recent history for the number of inhabitants on the planet to start multiplying exponentially? The tipping point was generally accepted to be the Industrial Revolution, but there are many smaller revolutions that contributed to population take-off which have brought the planet to its current dangerous overpopulation: revolutions that are medical, technological, agricultural, financial, transport and demographical in nature, among others.

Overpopulation is mainly referred to trends such as people living longer and enjoying higher live birth rates. Overpopulation of specific locations can also result from migration. Remarkably, the overpopulation of an area can occur without a net gain of population. It can result from a reduction in the carrying capacity of a region, such as reduced agricultural yield due to over farming or drought. Such conditions may lead to an out-migration. In certain countries, the impact of migration and accumulation of the population in cities was very important, but not only with respect to demographic growth, but also in relation to wealth generation. Currently, over half the global population live in cities of more than 300,000 inhabitants and which are expected to continuing growing until they reach 70% of the population.

Overpopulation creates greater demand on the world’s freshwater supplies. As only roughly 1% of the world’s water is fresh and accessible, this creates a major issue. Some estimates state that human demand for fresh water will stand at approximately 70% of what is available on the planet by 2025. This will place those living in impoverished areas that already have limited access to such water at great risk. 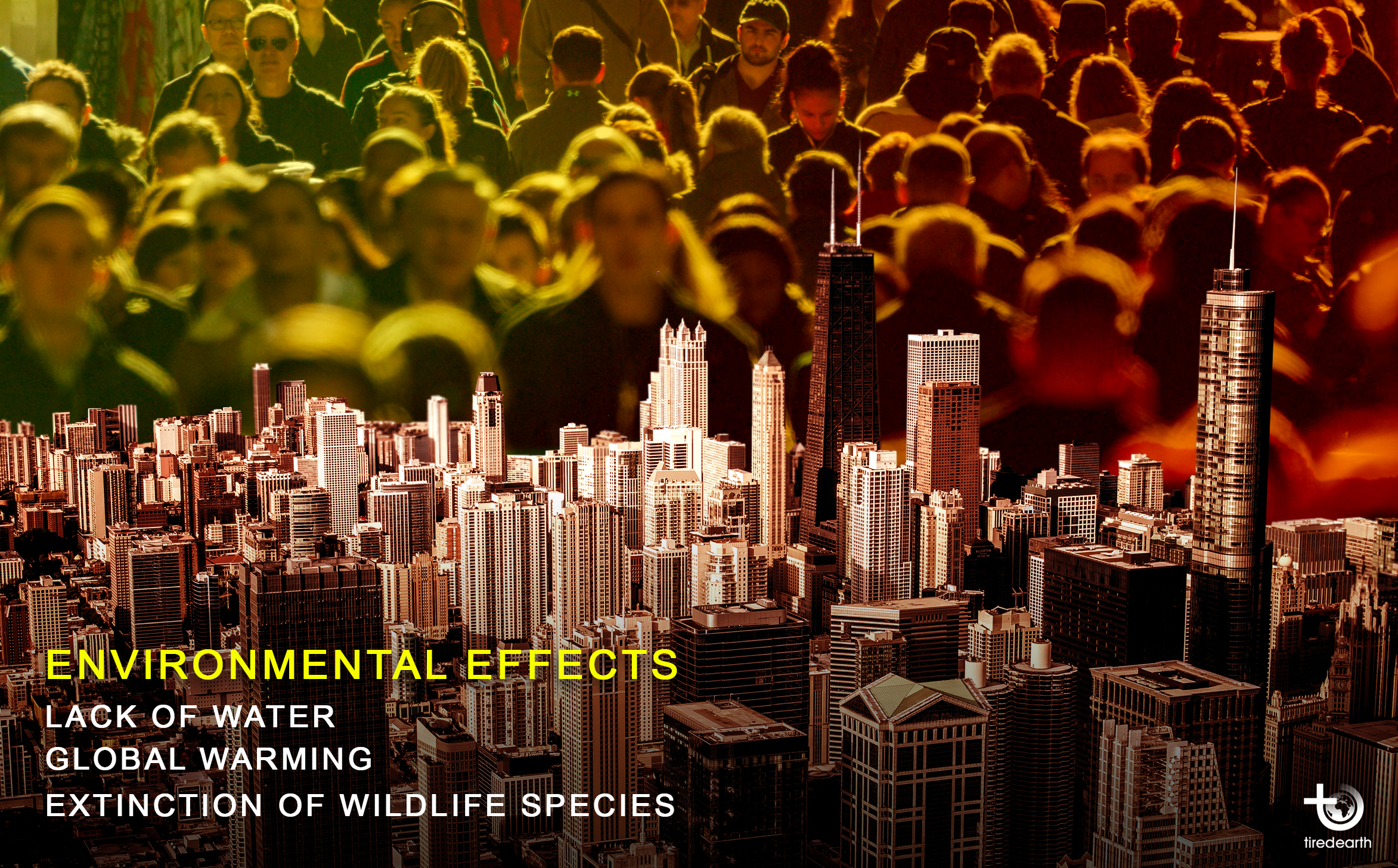 Human population growth and climate change have grown hand in hand as the use of fossil fuels has exploded to support industrialized societies. "More people means more demand for oil, gas, coal and other fuels mined or drilled from below the Earth’s surface that, when burned, spew enough carbon dioxide (CO2) into the atmosphere to trap warm air inside like a greenhouse," notes Scientific American. Most fossil fuel consumption comes from developed countries. It is a sobering thought that most developing nations aspire to similar industrial economies as they experience economic growth, which further escalates CO2 emissions into the atmosphere.

The effect of overpopulation on the world’s wildlife is also a major issue. As demand for land grows, so too does the destruction of natural habitats, such as forests. Some scientists warn that if present trends continue, as many as 50% of the world’s wildlife species will be at risk of extinction. Data has also been collected to show that there is a direct link between increases in human population and decreases in the number of species on the planet.

With more than 7.6 billion people on the planet, it’s easy to assume someone else will tackle and solve the issue of population and environment. Yet it is an issue that affects us all, and as such we’re all responsible for working towards a sustainable future in which everyone is able to enjoy a good quality of life without destroying the very things we rely on to survive. It’s possible, but it will take the combined and coordinated efforts of individuals, communities, and governments to get there. Right now, if we destroy our planet, we will have nowhere else to go. If the human population continues to grow unchecked, the effects of overpopulation on the environment will leave us with a planet no longer be able to sustain us.