At ten minutes per kilometer, a walk across the width – from the extreme north of Senegal to the core east of Eritrea – of the Sahel will take about 42 days.

That is if the path is as straight as a die and one treks day and night non-stop. But a straight path is no treat in Senegal as one would miss out the climate change devastated route from Dakar, through Louga, to St Louis, a semi-arid land mass in the north, and opening to Mauritania, another rock-strewn land to the west of the Sahel belt.

The Sahel is the zone of physical and cultural transition between the Sahara to the north and the Sudanian savanna to the south of Africa. It is described by Ibrahim Thiaw, UN special adviser, as "arguably one of the most vulnerable to climate change [with most likely] the largest number of people disproportionately affected by global warming". Temperature, in the region, is 1.5 times higher than the global average, according to the UN, and in 2018, about 5million people were displaced while over 20million required humanitarian assistance across the 10countries of Senegal, Mauritania, Mali, Burkina Faso, Algeria, Niger, Nigeria, Chad, Sudan, and Eritrea.

The hustle and bustle of Dakar, Senegal, could keep your eyes away from the effects of climate change in the capital city untill after a heavy rain. Flood is the greatest risk the changing climate poses to the whole of Senegal. And an entire Dakar street could be blocked, making it impossible for people to leave their houses. Access to public services such as electricity and water could also be suspended for days. But the impacts are felt more in city suburbs which are homes to millions of poor rural migrants whose source of living is predominantly fishing.

“Some years when flooding is bad, the water goes up to more than one metre, flooding the whole house… some of the rooms were so damaged that they are still unusable now,” 53year old Aby, a resident of Niette Barre, told Climate Adaptation UNDP.

It is a different story for the village of Doune Baba Dieye, a suburb of Saint-Louis described by UN-Habitat as one "most threatened by rising sea levels in the whole of Africa". Doune Baba Dieye, which is now completely submerged, was a victim of authority's effort to control Senegal River after heavy rains caused the rise of its drainage basin to critical levels. "Climate change has brought catastrophe", one Arona Fall, a guide at Langue de Barbarie national park, told Peter Yeung, a London based journalist. "Within a decade, the Langue de Barbarie would be completely gone".

A cross over the Senegal River lands one in Mauritania, at the foot of the Sahara. Climate change is not so much about flood in Mauritania, but drought and its effects. In the southern part, the traditional way of earning a living is livestock herding, but little or no rainfall has left much of the pastural lands depleted. This is not without grave impacts. The situation demands that men are away from their families for the greater part of the year. They accompany their herds down south, into neighbouring Mali and Senegal, in search of green field, leaving family responsibilities on the shoulders of semi-jobless women.

"We are left to take care of the house alone", said Maimouna, a mother in the village of Seyenne Mouro Molo, Mauritania. In a chat with Thomson Reuters Foundation, Demba, another Mauritanian village woman, shed more light:  "Our money, our field of millet – even the village's borehole – is my responsibility." Even at this, many of the few animals left for the women – and their children – to survive on don't live through the long periods of starvation. Some are also sold out to address family needs.

“The decrease of our small livestock worries me a lot,” Maimouna, who believed less animals meant less money, said."The less livestock we have, the less money we have". This, according to her, boils down to food shortage. “We sometimes manage to eat three meals a day, but we are obliged to reduce the rations, or to take only two meals,” she added. 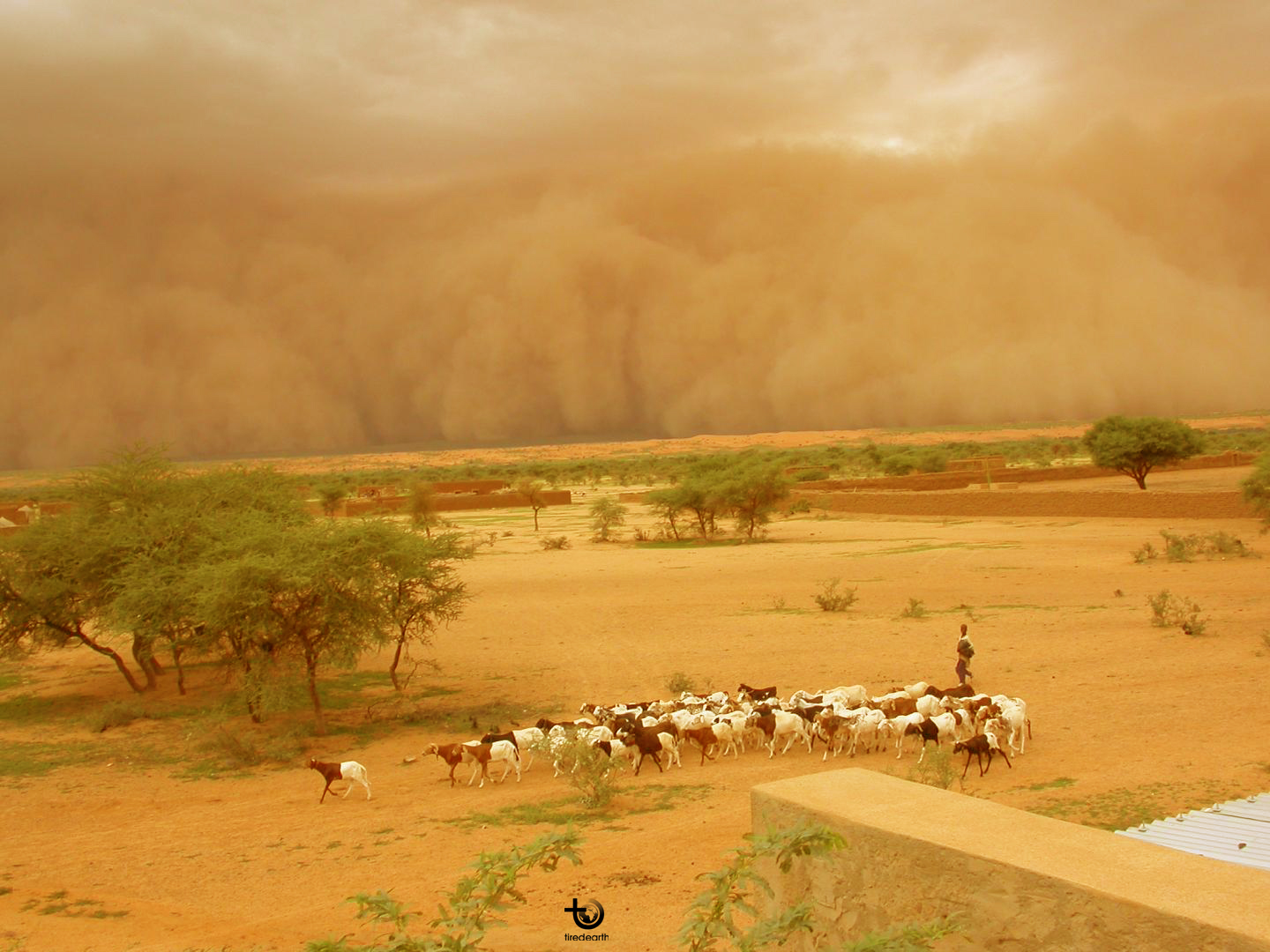 Local grain production has also dropped in Mauritania as advancing desert eats deeper into farm lands, making access to food more difficult. A walk through villages, in the Gorgol region, leaves less to the doubt on the dryness of agriculIural lands and its effects on vulnerable agropastoral households. In Natriguel, Mint Assid Manna opened up to The Guardian: "My daughter is malnourished, and needs treatment", she said. "I have no money to buy food for myself; I try to leave whatever food I have to the children, but that's not enough".

For Mali, the best description is that of Professor Paul Collier, former Director of the Research Department at the World Bank: a country sentenced to "the slow lane" of development. Climate Change has, perhaps, condemned this West African state to the ditch, or how better can I describe Mali than a lurch in the midst of disasters. In the south, flood could be so severe as to claim many lives, wash out crops, and destroy properties worth millions of dollars. And coming from the north is a ravaging desert that overtakes 48km south of grassland annually. Survival is up for grabs in the households of 80percent of Malian population that depends on fishing and farming. But worse is the drought-driven violent face-offs emanating from the struggle for water and on-the-run land between semi-nomadic Fulanis and the more settled Dogon farmers.

A village in the Mopti region of Mali was a morgue on a dark Saturday in March, this year. About 130Fulanis were massacred by people alleged to be Dogon hunters. Following the attack, Sobame De was also caught in a bloodbath described as a 'reprisal attack' by the Fulanis, leading to the death of 24 children and ten adults, according to the BBC. These were in addition to 202 deaths in 2018, and many more in previous years, resulting from similar circumstances.

The situation in Burkina Faso and Algeria isn't a far cry from the eye- wetting trend: a life- wretching flood in the former, amidst other extremes, and a venomous drought in the latter. But in the Lake Chad basin is another one too many twist in people's fate. The basin, which covers part of Niger, Nigeria, Chad and Cameroon, has Lake Chad as its major water source. Lake Chad was the relief of about 70 million locals back in the '60s. It was the sixth largest lake in the world, and was able to feed millions of locals with its children. The whole economy of the basin was centered on Lake Chad, but it shrank by nine-tenth in, what I describe as, a 'twinkle of an eye', leaving herders, farmers, traders, and all who survived on it to the mercy of the hotness of the day and the coldness of the night.

"We used to pass fields of maize on our way to the lake and there were vast numbers of boats bobbing up and down on the water back then, and huge fish markets," Bale Bura, who grew up around Lake Chad, told the BBC. But since the lake's decline, locals have had to deal with a rare kind of poverty. This turned the basin to a breeding ground for the dreaded Bokoharam insurgency which enticed men with a little cash offer. "I know many young people from my own village who got into these ugly kinds of [killing] jobs," Bura continued.

From Chad, the Darfur border takes one into Sudan in a matter of hours. And right there in Khartoum, capital city of Sudan, is a many time headline of major newspapers – a city of dust storms. Khartoum is often plagued by a temperature rise which ends in a thick wall of dust and sand, burying homes and eroding fertile soils along its path. Dust storms diminish Khartoum's biodiversity, fuel water scarcity and make the commercial city less of a habitat for humans.

For Eritrea, climate change isn't about dust storms. Lying on the Western coast of the Red Sea, Eritrea is the most eastern of all countries in the Sahel. It has its share of food shortages, extreme weather events and, just like Senegal, its days of flood, like Mauritania, its own pockets of drought. But Eritrea's eye-catching challenge is its beautiful coastline – a tourist attraction and source of income – that is being degraded, every day, by a rising temperature.

It is this serious in the Sahel, one of the poorest regions in the world.

For a reminder, "climate change refers to a broad range of global phenomena created predominantly by burning fossil fuels, which add heat-trapping gases to Earth’s atmosphere", quoting the US National Aeronautics and Space Administration (NASA). Its effects include an increase in the frequency and strength of extreme weather events such as flood, drought, heat waves, etc., among a host of terribles.