Hannah Steiner
marine wildlife conservation and environmental activist
Withdrawal of the EU would not put an end to uncertainty and would be a dark day for agriculture and food in Britain.

Brexit will influence many aspects of our environment, from wildlife to air pollution. But what will be the impacts on food and farming? The UK’s farmers meet a profound crisis in the event of a no-deal Brexit, and there will be dangerous situation ahead even if a deal is agreed.
As a matter of fact, there would be many negative and costly consequences of a ‘no deal’ Brexit, including interruptions to our food supply, lowering our food standards and imperiling livelihoods in the food and farming industries.

The price of food and other goods is also likely to increase. This could happen as a result of extra tariffs if we leave the EU’s single market, as well as from inflation caused by unfavourable exchange rates.

There’s a real risk that our food safety standards will be weakened as the UK strives to secure trade deals with non-EU countries after exit day. We need to protect our current standards to avoid the lower quality food that would be likely to come from a new trade deal with Trump and America . Otherwise chlorinated chicken  and “hormone beef” could end up in our supermarkets too.

In June 2018, The Times reported that a leaked plan, drawn up  by  the  Department  for  Exiting  the  European  Union, indicated  that in  a  no  deal scenario, the  UK  would have lots of problems and  suffer  shortages  of food,  fuels  and  medicine and so on. Similarly, Cambridge Econometrics’ analysis indicates that, under a chaotic no deal scenario, the UK would lose more than £46.7 billion (15 per cent) in investment by 2030, compared with business as usual.

A no-deal departure would also drastically deprive access to EU markets, with only a limited amount allowed in at a tariff of €16 (£14) a tonne. As a result, farmers would be forced to seek markets in North Africa, where British grain would have to be discounted to compete, leaving many out of pocket. However,  A no deal Brexit would forces farmers to compete with cheap imports and also could result  in  deregulation  that  weakens  environmental  standards,  whilst  a  hard  Irish border that generates postpones for live exports would threaten animal welfare.

There are more agricultural and economic threats of no deal for the island of Ireland. The agri-food industry is fully combined across the Irish border, such that food products produced in each country can cross the border freely, often several times. More than 60 per cent of Northern Ireland’s food and live animal exports are destined for the Republic of Ireland. If the UK leaves the EU without a deal and a hard  Irish  border  is  imposed,  checks  and  delays  in addition of  increasing  business costs, they would also put risks to animal welfare. Almost 400,000 pigs are exported from Ireland to Northern Ireland, and about 400,000 lambs are exported in the opposite direction. Border checks would cause huge delays which keep animals waiting in a poor conditions for several days.

For more, around 60% of farm incomes are shored up by European farm payments and post-Brexit back is just promised until 2020.

So farmers are preparing themselves for what’s to come. Approximately 65% of UK agricultural exports head for the EU and 70% of imports originate there. As well as involving painful tariﬀs, Brexit could stop free transfer of the EU workers that many farms and food processors have come to rely on. Above all, post-Brexit changes to farming policy could also present an unprecedented alteration for a more ecologically sustainable farming system that sees local food thrive, encourages biodiversity and animal welfare, promotes health and boosts rural economies. 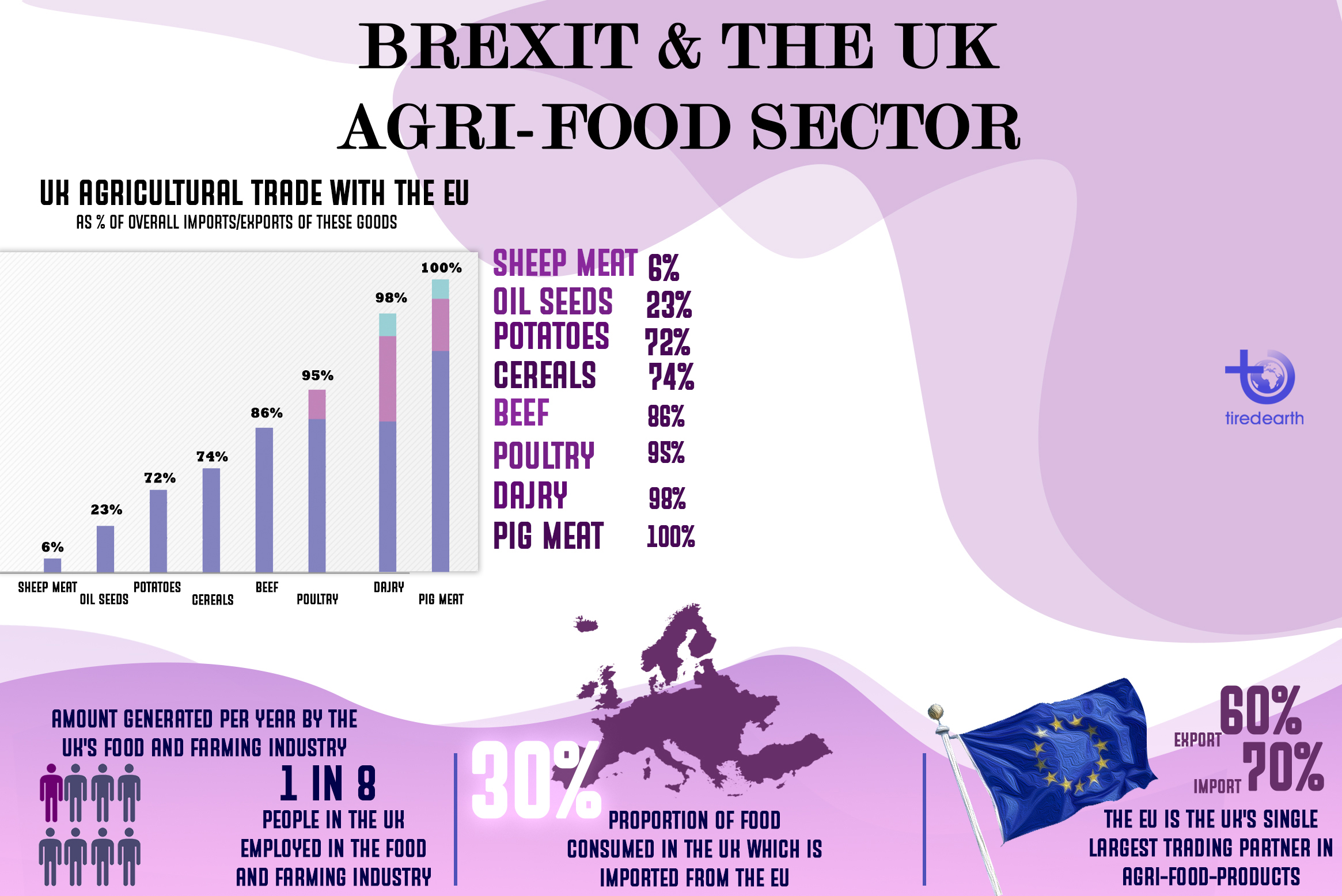 Another problem of no-deal Brexit is how to protecting existing standards and trade deals that would face calamity for British food and farming. Even before Brexit, we face huge challenges in farming that current policies are failing to address.

If there will be a no deal Brexit, there is a huge risk that the UK will be forced to import more food  from countries  with  lower  production  standards,  or  countries  which  are exposed to significant environmental risks like water stress. For instance, counting on imports from countries like India or many African countries, which experiences 9 months of water scarcity each year, would expose UK food supply chains to important interruption. UK’s government has already offered using trade policy to lower food prices and this means lower standards and reduced checks on imports due to improve access to cheaper produce. Ted McKinney, a US trade official, has called for the withdrawal of current UK food standards to enhance US-UK trade.

Domestic farmers  would  need  to  discover new  ways  to  stay  competitive in  the  face  of competition from other countries’ producers who are not limited by severe environmental regulations. Existing regulatory standards could become worsen, as farmers look for instant cost saving opportunities. Many farmers would face strict economic pressure and would be more reluctant to make long term investments to transition to more sustainable farming practices.

There are other risks for UK’s public includes low prices and high costs for farmers, the dangerous over-use of antibiotics and the devastating impact of bovine TB – to the creeping, monster tasks of meeting the UK’s commitment to an 80% cut in greenhouse gas emissions by 2050 and reversing a long-term decline in wildlife. If trading with the US does water down UK food standards, farming practices may follow.

UK farmers would need to produce cheaper food to compete with other countries’ industrial farming systems like the US. The UK might be forced to increase intensification and industrialisation of farming to do this. Not only would hormone-treated beef, chlorine-washed chicken, and pesticide-doused foods, be sold in UK’s supermarkets, but these common US practices could become part of UK product too. Therefore, these practices would uphold the environmentally-destructive industrialisation of farming, and causes health risks  to the public.

Rules on genetically modified crops (GM crops) could also be mitigated and this increases the risk of both health and environmental problems. This could generate a growth in the use of herbicides linked to environment damage and health impacts, disruption of local ecosystems from cross pollination with GM crops, and farmers getting stuck into unfair agreements with multinational corporations.

Brexit also poses an insecure and unfair situation for UK food production especially for farm workers. As EU farm workers leave the UK, we have to strive a lot to fill these low-paid and insecure jobs. Our fruit and vegetable production is largely dependent on migrant workers. So except the labour crisis, we will grow less and import more, and healthy eating may become less affordable.

Air pollution and infertility: the next global crisis?

Carbon’s Impact on the Largest Desert of the World

Will the top CO2 emitters change their ways? And if not, who is going to save the day?

9 Ways to Combat Microplastics at Home

Is The Plastics Crisis Really Affecting Our Fertility?

Human rights must be at heart of new biodiversity framework, experts say