Hannah Steiner
marine wildlife conservation and environmental activist
Cute, soft and slow sloths are seen by many as affable living stuffed animals, and that is how they tend to be portrayed in children's movies, documentaries and viral videos.

The 20th of October marks one of the cutest days in the animal calendar - International Sloth Day! It was created in 2010 by the AIUNAU Foundation, a non-profit conservation and wildlife organization based in Colombia. The unofficial holiday raises awareness about the life cycle and natural habitat of the Sloth. The day also calls on people to learn more about these native South and Central American animals.

International Sloth Day is in fact about two things: learning to take a lesson or two in being as cool as a cucumber from the sloths of the world, and raising awareness about the many sloths that get injured, captured to be sold as pets, or even killed by humans. So help keep those sleepy smiles on sloths’ faces and take part in this year’s International Sloth Day!

It is important to get to know these species so special, these cryptic and shy beings that inspire us and awaken our tender feelings.

There is a lot that sloths can teach us – respect, tenderness, joy, pacific share … nevertheless, without consideration, in our lack of awareness, we harm them so much and bring their existence in danger of extinction.

The three-toed sloth is an arboreal animal, inhabiting the tropical forests of Central and South America. Their algae-covered fur helps camouflage the sloth in its forest environment. Sloths spend nearly all of their time in trees, descending to the ground only once a week to defecate. Sloths even sleep in trees, and they sleep a lot—some 15 to 20 hours every day. Even when awake they often remain motionless. At night they eat leaves, shoots, and fruit from the trees and get almost all of their water from juicy plants. Sloths mate and give birth while hanging in the trees. Three-toed sloth babies are often seen clinging to their mothers—they travel by hanging on to them for the first nine months of their lives.

Most people picture sloths in the trees, so when they see them in the water they are typically shocked, but sloths are really great swimmers. People sometimes take the sloths out of the water but they can hold their breath and swim just fine. Sloths can swim three times faster than they can walk on land. And because of their ability to slow their heart rates to one-third its normal rate, they can also hold their breath for a whopping 40 minutes under water. 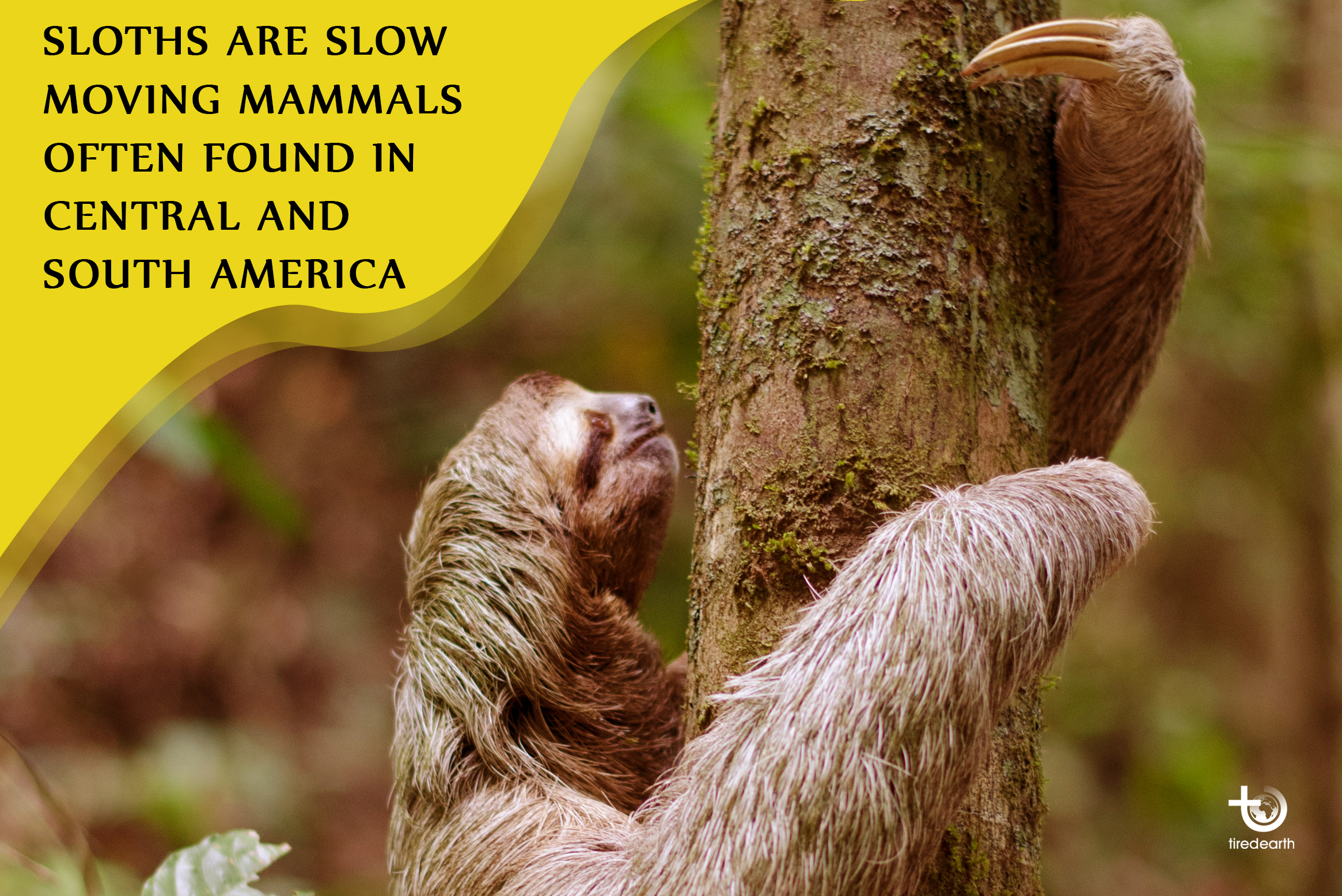 The brown-throated sloth population is threatened by human activities. In addition, their restricted diet prevents them from thriving in captivity. In fact, there are three major factors that contribute to the sloth’s dwindling populations: habitat loss, accident, and illegal pet trade.

Habitat loss is one of the major threats to the sloths. As we mentioned before, these mammals live most of their lives in trees. They do almost everything–eating, sleeping, mating, and even giving birth–while hanging on branches. Apart from that, you could say that they’re pretty much useless on ground level.

So just imagine what would happen if humans decide to convert a forest into an agricultural farm, palm oil plantation, or something else equally destructive. Cutting down trees would destroy the sloth’s home instantly. Without help from an animal rescue or sanctuary, these animals would be extremely vulnerable to predators, weather elements, and moving vehicles.

Cars are among the biggest dangers to sloths. There are times when these tree-huggers are left with no choice but to crawl on the ground to transfer to another tree. If the animals are crossing the road, drivers who are not paying attention are likely to run them over. If humans continue destroying rain forests, an increasing number of these animals will be forced out of their homes to crawl on the ground. Who knows how many more sloths won’t successfully make it to the other side of the road?

Buying a sloth as a domestic pet is growing in popularity in many countries. Due to certain pet laws and policies, many people interested in keeping sloths as pets will opt for an illegal deal. These illegal suppliers will pluck the animals from their natural habitats and sell them without going through any governmental processes. Others might even kill the adult sloths and snatch their babies as the latter are in higher demand. Killing adult sloths, as well as abducting baby sloths from their natural habitat, will only contribute to reduced populations in the years to come.

While sloths are not endangered at the moment, it’s clear these amazing animals face challenges that may threaten their population in the future. But this can easily be avoided as long as we leave them alone in their natural environment, and remain diligent with sloth conservation efforts.

Why is recycling single-use coffee cups so difficult?

What is ‘degrowth’ and how can it fight climate change?

E-bikes are good for the environment and for you too

24% Of Chemicals in Plastic May Be Worth Worrying About

Who is CO2zilla, and what can I do to stop it? What should I do?