Hannah Steiner
marine wildlife conservation and environmental activist
Seas are getting more acidic and that is a key impact of today’s climate crisis.

Ocean acidification implies to a reduction in the pH of the ocean over a long period of time, caused mainly by uptake of carbon dioxide (CO2) from the atmosphere. In last 200 years since the industrial revolution began, the concentration of carbon dioxide (CO2) in the atmosphere has increased due to human activities. At the same time, the pH of surface ocean waters has fallen by 0.1 pH units. The pH scale, like the Richter scale, is logarithmic, so this change represents approximately a 30 percent increase in acidity.

Seas are getting more acidic and that is a key impact of today’s climate crisis. Scientists said the latest research is a warning that humanity is risking potential “ecological collapse” in the oceans, which produce half the oxygen we breathe.

Today, Ocean acidification is affecting the entire world’s oceans, including coastal estuaries and waterways. more than two billion people worldwide rely on food from the ocean as their leading source of protein. Many jobs and economies in the UK and around the world depend on the fish and shellfish that live in the ocean.

Why is ocean acidification so important?

As we said, Carbon emissions make sea more acidic. 75% of marine species were wiped out 66m years ago. Ocean acidification has the potential to change marine ecosystems and impact many ocean-related benefits to society such as coastal protection or provision of food and income. Present ocean acidity change is unprecedented in magnitude, occurring at a rate approximately ten times faster than anything experienced during the last 300 million years. This rapid timeline is jeopardising the ability of ocean systems to adapt to changes in CO2 – a process that naturally occurs over millennia. Changes in ocean pH levels will persist as long as concentrations of atmospheric CO2 continue to rise. To avoid significant harm, atmospheric concentrations of CO2 need to get back to at least the 320-350 ppm range of CO2 in the atmosphere. Compared to other similar events in Earth's history, ocean acidification, over hundreds of years, has been happening very fast. However, its recovery has been very slow due to the inherent time lags in the carbon and ocean cycles.

The absorption of carbon dioxide (CO2) in the atmosphere has increased due to the burning of fossil fuels and land use change. This may not be directly linked to the contamination of the water but it plays some crucial role in the changing of environment. When the level of carbon dioxide gas gets higher in the ocean, it definitely affects the whole water. When sea organisms die on the sea beds, they remain pile up and form corals which are consisting of carbons. Also, these organisms release calcium into the water. These compounds have far-reaching detrimental impact on the composition of the water as they add acidity. 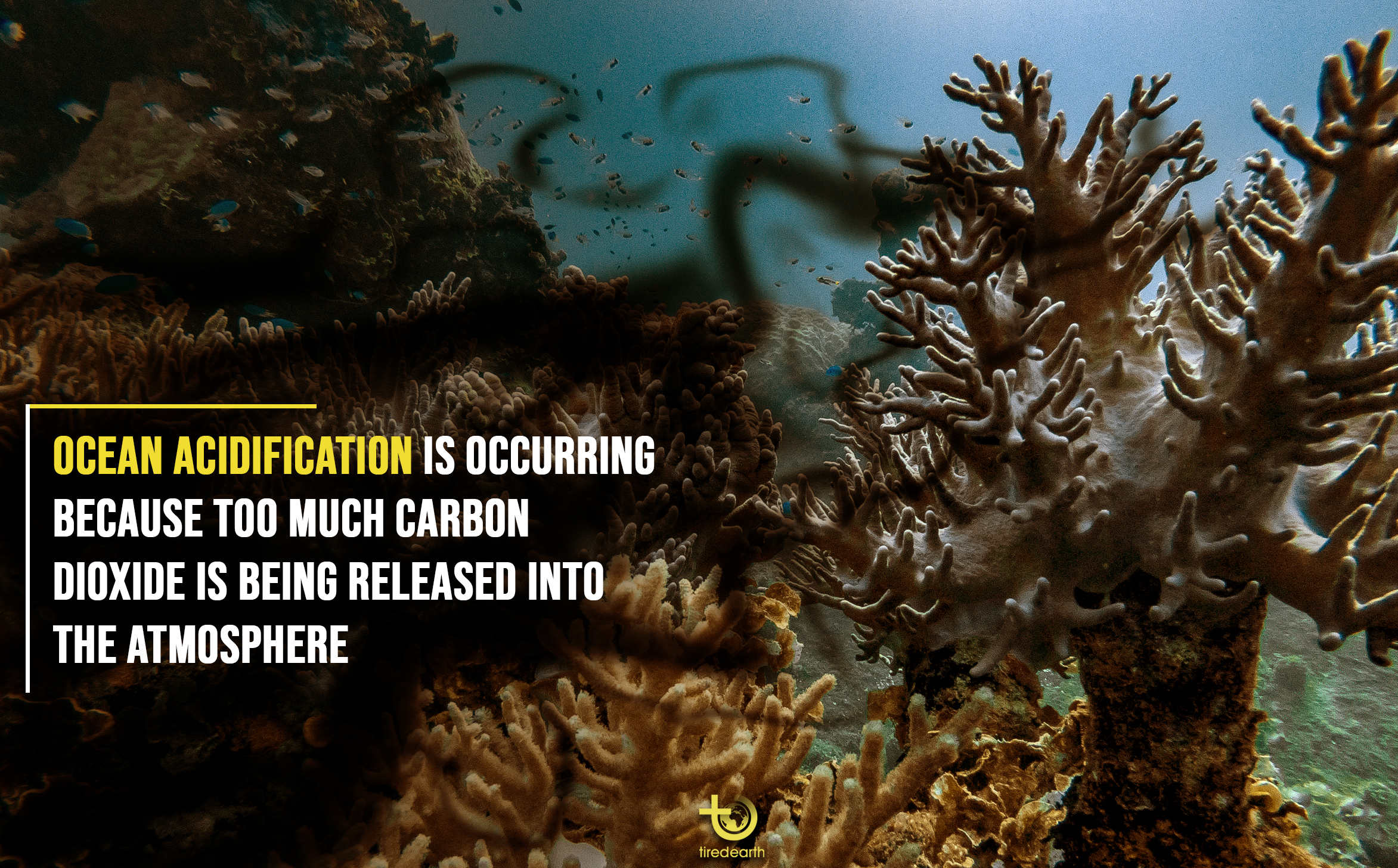 Cement production, for example, accounted for around 8% of the gas released globally in 2017. Countries or cities that have embraced industrialization pose dangerous implications to the environment. Their existence can only mean that there is increased carbon dioxide concentration in the atmosphere which when absorbed into the water, the level of acidity increases. Industries contribute to the emission of dangerous gases such as carbon dioxide, sulfur dioxide, nitrogen oxides and many others which later form acid rain or dissolve in the oceans to create acidic conditions.

Oil Spills is another reason for ocean acidification. Oil spills have both short term and long term effects on marine mammals. Toxic chemicals in oil causes serious damage to the digestive system and internal organs of sea creatures like seals, otters, dolphins and so on. In the long term, exposure to petroleum can cause reproductive damage, making it difficult for populations to repopulate in the wake of oil spills.

Agriculture may also contribute to the problem of ocean acidity. It may happen especially when the methods that are employed by the farmers are not suitable. These are methods that may be prone to soil erosion and in the process, the chemicals are washed downstream into the ocean. In short, if land is poorly managed, the water masses can be hit by the impact of acidifying soil mineral content and water pollution.

Ocean acidification reduces the amount of carbonate, a basic building block in seawater. A more acidic environment will harm other marine species such as molluscs, corals and some varieties of plankton. The shells and skeletons of these animals may become less dense or strong. In the case of coral reefs this may make them more vulnerable to storm damage and slow the recovery rate. However, the impacts of ocean acidification are not uniform across all species. Some algae and seagrass may benefit from higher CO2 concentrations in the ocean, as they may increase their photosynthetic and growth rates.
Above all, ocean acidification also affects the flow of the food chain. Once one aspect of the food chain is distressed, the rest of the food chain will suffer. Local economies will suffer when fish are tainted and in low supply due to a poor food web. Fisherman will be unable to produce food for the community, and fisherman will suffer when fish cannot be sold. Most of the shellfish we eat are going to be negatively impacted by ocean acidification due to the fact that they will be unable to build sturdy shells.

Urgent actions are needed to address

With the pace of ocean acidification is increasing, scientists, resource managers, and policymakers recognize the urgent need to strengthen the science as a basis for sound decision making and action. Sustainable management, conservation and restoration of the ocean are needed. At the IUCN World Conservation Congress 2016, IUCN Members approved a resolution calling for the protection of 30% of the planet’s ocean by 2030. This fast change is stressing out the things that live in the sea. It softens the shells of scallops. It slows the molting of crabs, lobsters, and more. It weakens corals. It confuses fish, disturbing their sense of smell. It may even change the way sounds transmit through the water, making the underwater environs slightly noisier. The future holds even more challenges. By 2050, scientists predict that 86 percent of the world’s ocean will be warmer and more acidic than anything in modern history. By 2100, the pH of the surface ocean could drop to under 7.8, or more than 150 percent compared to today’s already-corrosive state—and potentially even more, in some particularly sensitive parts of the planet, like the Arctic Ocean. The world will face irreversible events unless some emergency actions are done in the future.