Liang Lan
Marine and Environmental Scientist
The planet’s wildlife is disappearing at unprecedented rates and ecosystems are deteriorating rapidly, according to a growing number of studies.

The planet’s wildlife is disappearing at unprecedented rates and ecosystems are deteriorating rapidly, according to a growing number of studies. This is why the world’s largest biodiversity conference, COP15, taking place later this year, could be an important moment for the planet.

But one of the only ways to achieve the world’s biodiversity goals and save nature is to include human rights at the heart of all conservation policies, and recognize the cultural and territorial rights of Indigenous and local peoples, according to a new report.

Indigenous peoples and local communities (IPLCs) actively conserve at least 22% of the world’s key biodiversity regions, an area approximately the size of Africa, says a report by the international conservation association ICCA Consortium.

But taking a deeper dive into what this means, ICCA Consortium researchers looked at 17 of these communities around the world that manage to remain strongholds of endemic and threatened species, to understand how they’ve managed to thrive. The results, “Territories of Life: 2021 Report,” details how local cultural practices and unique governance systems are the main reasons conservation here works.

“Governments should recognize Indigenous peoples and local communities in the roles that they play in protecting and conserving nature, which is a primary importance,” says Ameyali Ramos Castillo, international policy coordinator with the ICCA Consortium. “I think that’s the basis for everything.”

Some of the examples from the report include the Maasai people of Tanzania who live around the Lake Natron catchment area, the world’s most critical breeding site for lesser flamingos, and have long protected the territory because of the livelihood it offers them, from grazing areas, water source, natural salt licks and key spiritual sites. The Fokonolona of Tsiafajavona in Madagascar are said to be descendants of the five sons of the ancient king called Andriampenitra. They diligently conserve their forest as it represents the dowry of their princess and legacy to successive generations. Today, their territory is home to 11 critically endangered, 32 endangered, and 25 vulnerable species. 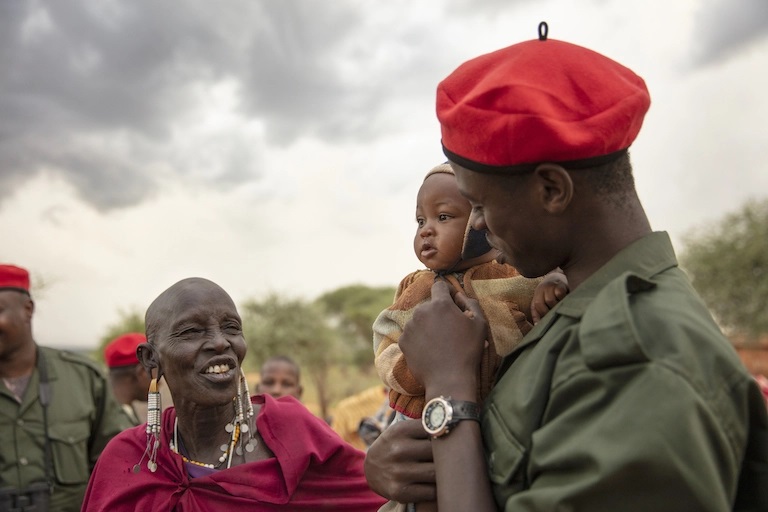 In Ecuador, the Kichwa community of Sarayaku has long sustained its territory in the Amazon Rainforest based on its belief of Kawsak Sacha, or Living Forest, whereby the rainforest is considered a living being with rights, made up of all other life forces. This includes flora and fauna, but also the protective beings believed to look after the trees, lagoons, marshes and other elements in the rainforest, and live alongside humans, says Daniel Santi, a Kichwa leader from Sarayaku.

“I believe the knowledge of the Indigenous peoples is, first, about respect and balance of mutual relationships,” says Santi, who collaborated with the ICCA Consortium to create the final report. “If there is an imbalance within the ecosystem or with the protective beings, that imbalance cannot be remedied.”

Santi, 45, says the community has also been politically organized since the late 1970s, partaking in protests and lawsuits against the government to stop their territory from being sold to oil companies. Sarayaku gained land title of its 135,000 hectares (333,592 acres) of rainforest territory in 1992, but that hasn’t stopped the constant threats of extractive activity, as has happened in other nearby Indigenous territories, says Santi.

The ICCA Consortium’s Castillo says discrepancies between written laws and actionable implementation is a global and systemic problem “that make it very difficult for Indigenous peoples to be able to exercise their rights on their lands and territories.” 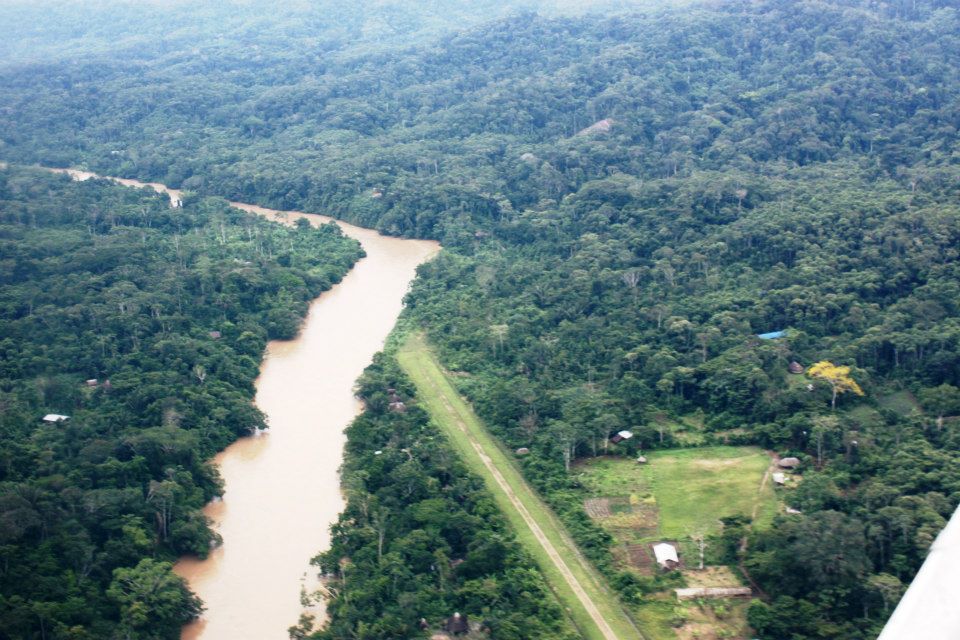 Aerial view of the Sarayaku territory, located in the Ecuadorian province of Pastaza. Photo by Carlos Mazabanda.

The ICCA Consortium report is the latest in a growing body of research that shows Indigenous communities as the most effective protectors of their natural environment, which Indigenous leaders, like Santi, have long been contending. Earlier this year, the U.N. released its own report that shows supporting Indigenous and other rainforest communities is the most cost-effective way to address climate change and protect biodiversity.

Scientists have long been warning that the world’s biodiversity is rapidly declining, mainly due to habitat loss driven by human activities like agriculture expansion and industrial mining.

This loss could also be damaging for humans, warn scientists, as most wildlife play important regulatory roles in healthy ecosystems, like mitigating disease.

In October, world leaders will meet for the next U.N. Convention on Biological Diversity Conference, also called COP15, in Kunming, China, where they will sign the Post-2020 Global Biodiversity Framework, a new 10-year pact to protect the planet’s biodiversity. There are 196 countries party to the CBD expected to take part in the conference, though it’s unclear how the COVID-19 pandemic will affect attendance. COP15 has already been postponed twice, after originally being scheduled for October 2020.

The post-2020 framework will replace the previous Aichi agreement, signed in Japan in 2010, which has largely been considered a failure as none of the 20 conservation targets were reached, according to a U.N. assessment.

The ICCA Consortium is one of many NGOs participating in the CBD negotiations, along with other scientists and conservation experts, currently discussing details of the post-2020 framework, and how best to achieve the CBD’s strategic goal of “living in harmony with nature” by 2050.

Castillo says it was a “stroke of luck” that the “Territories of Life: 2021 Report” was released now.  “We’re hoping it informs a lot of the discussions,” she says, emphasizing that human rights must be at the center of all conservation policies, and that territorial rights for Indigenous and local peoples be recognized.

So far, says Castillo, human rights were noticeably missing from the U.N. CBD draft proposal for the post-2020 framework released in August 2020, but discussions have been changing during the current intersessional meetings, with input from the various organizations involved in the negotiations. Last year, the ICCA Consortium and a variety of other Indigenous rights and conservation groups created a discussion paper to contribute to the post-2020 framework discussions, where they rewrote the U.N. CBD draft to incorporate human rights language throughout each of the 20 targets.

This includes Target 2, for example, which proposes to save 30% of the planet by 2030, which has been lauded by many media. The groups instead suggest this be altered to specify that the chosen 30% should “focus on areas particularly important for biodiversity through appropriate recognition and support for the collective lands, waters and territories of Indigenous peoples and local communities.” This number should also be higher, they say.

Ana Di Pangracio, an environmental lawyer on the advisory board for Women4Biodiversity, part of the CBD negotiations and who also contributed to the discussion paper, says the lack of human rights commitment in the Aichi pact was one of the main reasons the world failed to meet any of those targets.

“It didn’t take into consideration the contributions, roles and input that various rights holders can offer, like Indigenous peoples, local communities, women, and youth,” Di Pangracio says, adding that conservation must be an inclusive and participatory process.

Di Pangricio, who is also deputy executive director of the Argentina-based environmental NGO FARN, emphasizes the need to include the rights of women and girls in the Post-2020 Global Biodiversity Framework.

Mounting evidence shows they not only face distinct threats in the face of forest loss, like increased gender-based violence as competition over scarce resources intensifies, but they also have unique visions for conservation as they have different priorities and uses for the forest compared to men. “So far, this has been very invisible” for policymakers, Di Pangracio says.

Both Castillo and Di Pangracio say another important priority for the Post-2020 Global Biodiversity Framework is to identify and halt the industrial drivers of biodiversity loss, such as extractive activities and large-scale agriculture expansion. It’s also essential that states actually implement the policies this time, Di Pangracio says.

In Ecuador, Santi says Sarayaku will continue to “pressure the state from different angles.”

“So that it recognizes not only the Sarayaku territory, but all the territories of the Indigenous peoples that are currently conserving, managing and everything, and proposing real alternatives,” he adds.