Hannah Steiner
marine wildlife conservation and environmental activist
We human beings need plants for our survival. Everything we eat consists of plants or animals that depend on plants somewhere along the food chain.

Plants also form the backbone of natural ecosystems, and they absorb about 30 percent of all the carbon dioxide emitted by humans each year. But as the impacts of climate change worsen, how are higher levels of CO2 in the atmosphere and warmer temperatures affecting the plant world?

Plants use sunlight, carbon dioxide from the atmosphere, and water for photosynthesis to produce oxygen and carbohydrates that plants use for energy and growth.

Increased photosynthesis results in more growth in some plants. Scientists have found that in response to elevated CO2 levels, above-ground plant growth increased an average of 21 percent, while below-ground growth increased 28 percent. As a result, some crops such as wheat, rice and soybeans are expected to benefit from increased CO2 with an increase in yields from 12 to 14 percent. The growth of some tropical and sub-tropical grasses and several important crops, including corn, sugar cane, sorghum, and millet, however, are not as affected by increased CO2.

Under elevated CO2 concentrations, plants use less water during photosynthesis. Plants have openings called stomata that allow CO2 to be absorbed and moisture to be released into the atmosphere. When CO2 levels rise, plants can maintain a high rate of photosynthesis and partially close their stomata, which can decrease a plant’s water loss between 5 and 20 percent. Scientists have speculated that this could result in plants releasing less water to the atmosphere, thus keeping more on land, in the soil and streams. 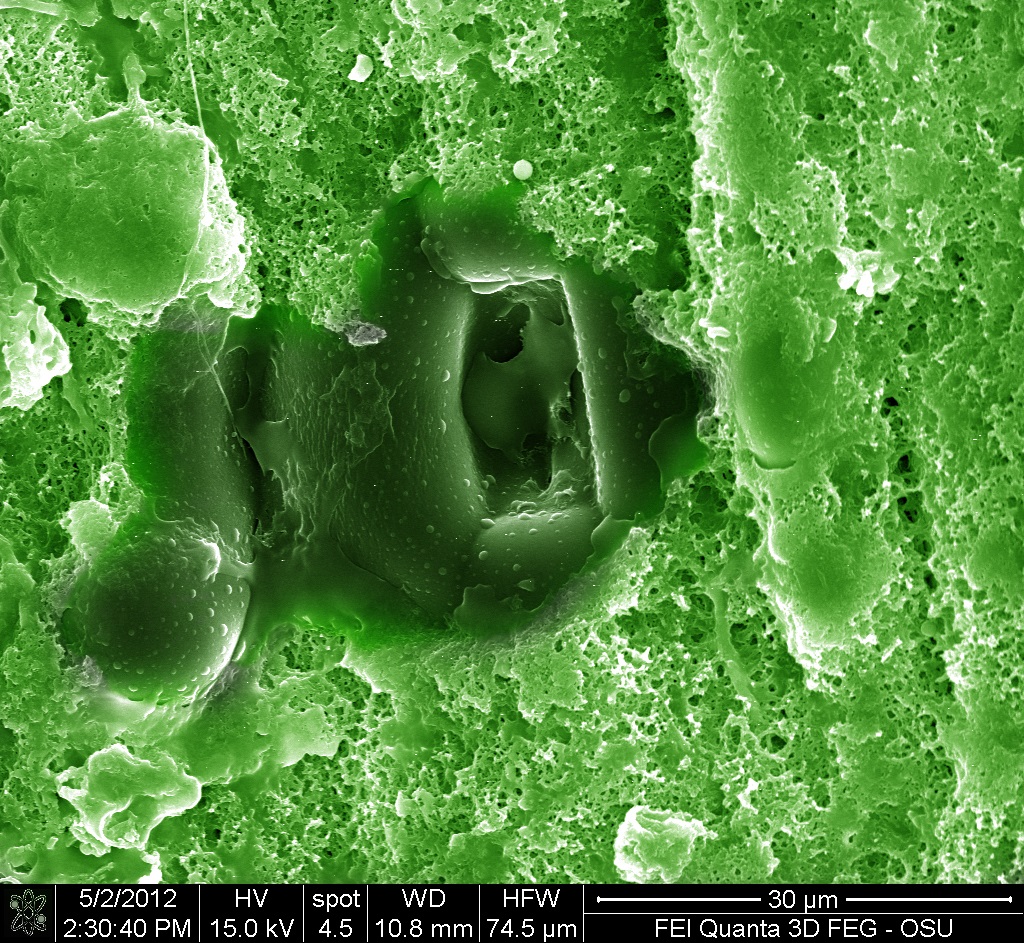 A fir needle stomata, which lets CO2 in and water vapor out. Photo: Oregon State University

But other factors count

Elevated levels of CO2 from climate change may enable plants to benefit from the carbon fertilization effect and use less water to grow, but it’s not all good news for plants. It’s more complicated than that, because climate change is also impacting other factors critical to plants’ growth, such as nutrients, temperature, and water.

Nitrogen limitations
Researchers that studied hundreds of plant species between 1980 and 2017 found that most unfertilized terrestrial ecosystems are becoming deficient in nutrients, particularly nitrogen. They attributed this decrease in nutrients to global changes, including rising temperatures and CO2 levels.

Nitrogen is the most abundant element on Earth, making up about 80 percent of the atmosphere. It is an essential element in DNA and RNA and is needed by plants to make carbohydrates and proteins for growth. However, plants cannot use the nitrogen gas found in the atmosphere because it has two atoms of nitrogen triply bonded together so tightly that they are difficult to break apart into a form plants can use. Lightning has enough energy to break the triple bond, a process called nitrogen fixation. Nitrogen is also fixed in the industrial process that produces fertilizer.

But most nitrogen fixation occurs in the soil, where certain kinds of bacteria attach to the roots of plants, such as legumes. The bacteria get carbon from the plant and in a symbiotic exchange, fix the nitrogen, combining it with oxygen or hydrogen into compounds plants can use. 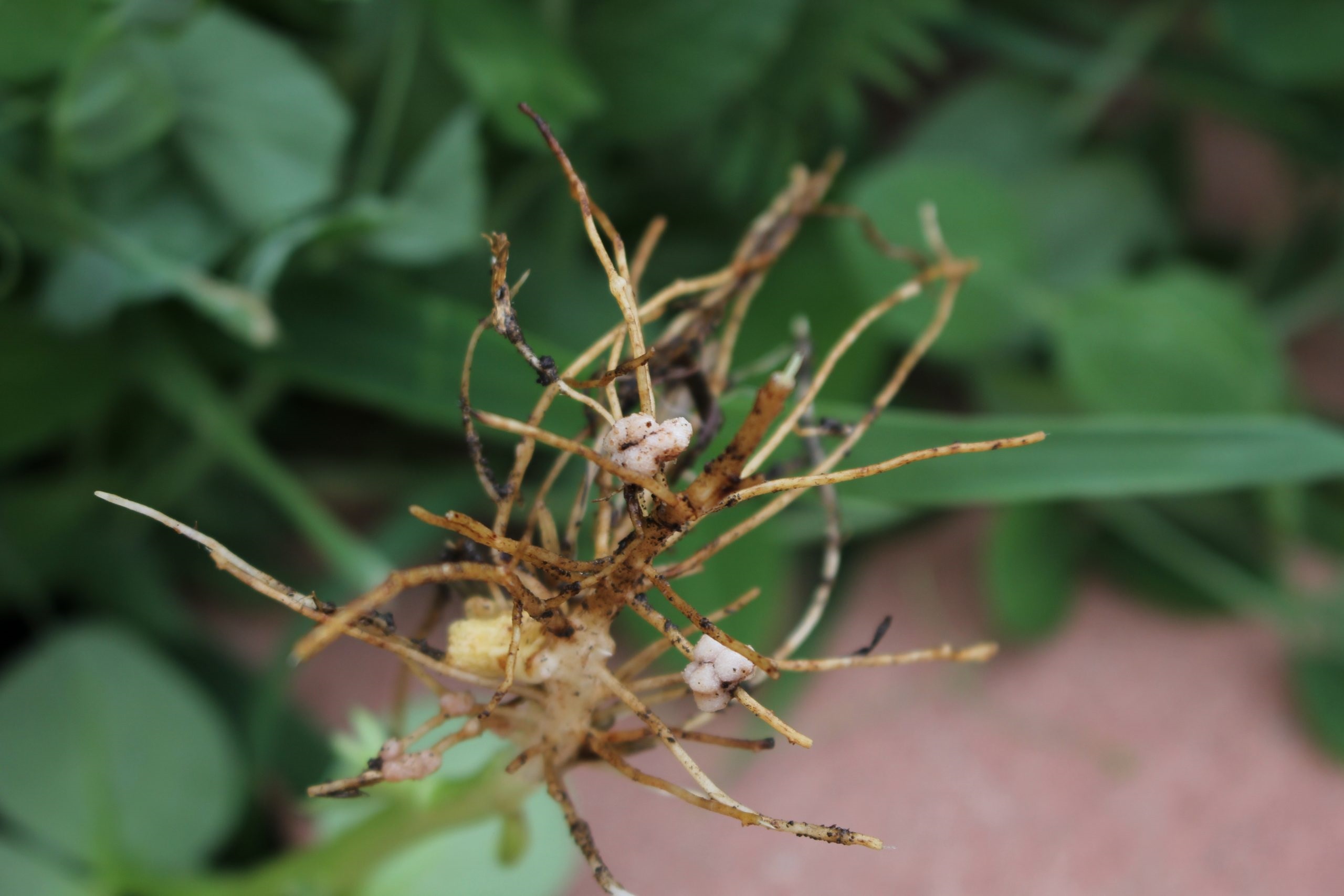 Kevin Griffin, a professor in Columbia University’s Department of Ecology, Evolution and Environmental Biology and the Lamont-Doherty Earth Observatory, explained that most living things have a relatively fixed ratio between carbon and nitrogen. This means that if plants take up more CO2 to create carbohydrates because there’s more CO2 in the atmosphere, the amount of nitrogen in the leaves may be diluted, and a plant’s productivity depends on having enough nitrogen. “If you increase the CO2 around a leaf or around the plant or around the plot of forest, usually the productivity goes up,” he said. “But whether or not that increase in productivity lasts and is permanent, can be a function of whether you have [enough] nitrogen. So if nitrogen is limited, it could be that a plant just cannot use that extra CO2 and its boost in productivity can be short lived.”

Trees currently absorb about a third of human-caused CO2 emissions, but their ability to continue to do this depends on how much nitrogen is available to them. If nitrogen is limited, the benefit of increased CO2 will be limited too.

Earlier research on nitrogen fixation, based on measurements of free-living bacteria, had predicted that the fixation process works fastest at 25°C, and that as temperatures rose above 25°C, the rate of fixation would go down. In a warming world, this would have meant a runaway scenario where nitrogen fixing would decrease as temperatures rose, resulting in less plant productivity. Plants would then remove less CO2 from the atmosphere which would cause further warming and less nitrogen fixing, and so on. Griffin and his colleagues developed an instrument that enabled them to measure the temperature response of nitrogen on the bacteria that formed an association with the roots of plants, as opposed to on free-living bacteria.

“What we found with our new instrument looking at whole-plant symbioses in temperate and tropical trees, was that the optimal temperature for nitrogen fixation was actually about 5°C higher than any of these previous estimates, and in some cases as much as 11°C higher. This needs to be tested over a huge number of plants, but if it holds, it means that the likelihood of nitrogen fixation decreasing is much lower than we thought, which means that plants could stay more productive and prevent the runaway scenario.

Griffin’s work also found that the temperature response of nitrogen fixation is independent from the temperature response of photosynthesis, which involves enzymes made with nitrogen. Higher temperatures can make these enzymes less efficient. Rubisco is the key enzyme that helps turn carbon dioxide into carbohydrates in photosynthesis, but as temperatures go up, it “relaxes” and the shape of its pocket that holds the CO2 gets less precise. Consequently, one fifth of the time, the enzyme winds up fixing oxygen instead of carbon dioxide, lowering the efficiency of photosynthesis and wasting the plant’s resources. With an even greater temperature increase, Rubisco can completely deactivate. Since plants respond to nitrogen fertilizer by increasing the amount of Rubisco they have and growing more, the finding that nitrogen fixation can be sustained at higher temperatures than previously thought offers the possibility that it could compensate for the decreasing efficiency of Rubisco at higher temperatures.

Rising temperatures are also causing growing seasons to become longer and warmer. Because plants will grow more and for a longer time, they will actually use more water, offsetting the benefits of partially closing their stomata. Contrary to what scientists believed in the past, the result will be drier soils and less runoff that is needed for streams and rivers. This could also lead to more local warming since evapotranspiration—when plants release moisture into the air—keeps the air cooler. In addition, when soils are dry, plants become stressed and do not absorb as much CO2, which could limit photosynthesis. Scientists found that even if plants absorbed excess carbon for photosynthesis during a wet year, the amount could not compensate for the reduced amount of CO2 absorbed during a previous dry year. 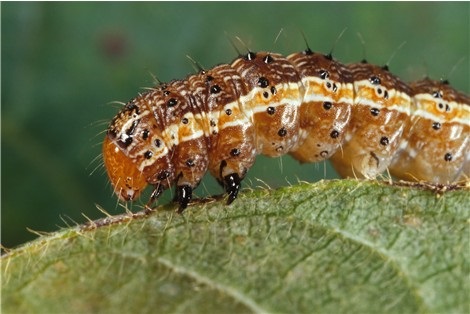 The fall army worm is a chronic pest in the southeastern US. Photo: Canadian Biodiversity Information Facility

Higher temperatures and an increase in moisture also make crops more vulnerable. Weeds, many of which thrive in heat and elevated CO2, already cause about 34 percent of crop losses; insects cause 18 percent of losses, and disease 16 percent. Climate change will likely magnify these losses.

Many crops start to experience stress at temperatures above 32° to 35°C, although this depends on crop type and water availability. Models show that each degree of added warmth can cause a 3 to 7 percent loss in the yields of some important crops, such as corn and soybeans.

In addition, an increase in temperature speeds up the plant lifecycle so that as the plant matures more quickly, it has less time for photosynthesis, and consequently produces fewer grains and smaller yields. 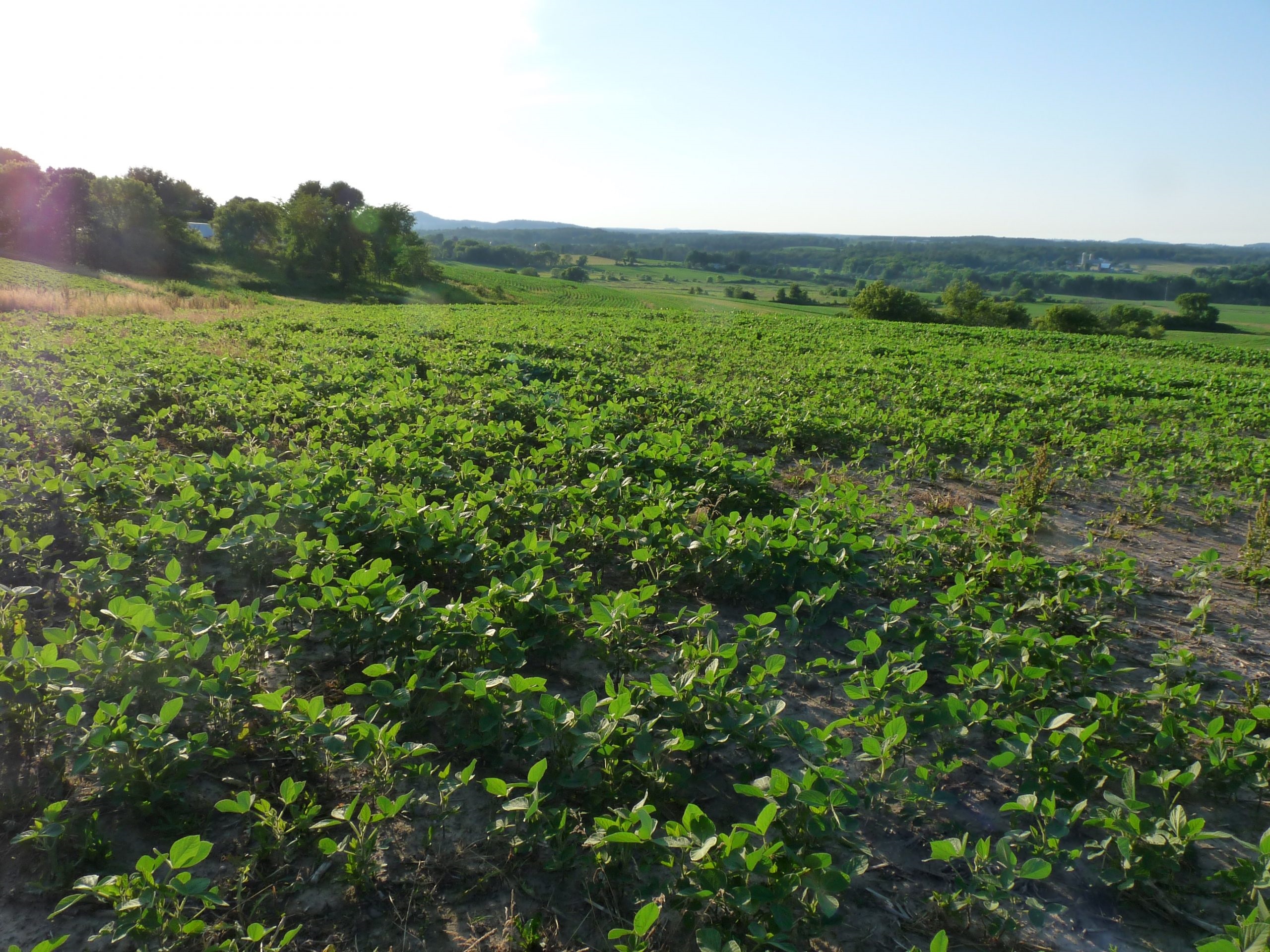 Plants are also on the move in response to warming temperatures. Species that are adapted to certain climatic conditions are gradually moving north or to higher elevations where it is cooler. In the last several decades, many North American plants have moved approximately 36 feet to higher elevations or 10.5 miles to higher latitudes every 10 years. The Arctic tree line is also moving 131 to 164 feet northward towards the pole each year. New environments may be less hospitable for the species moving into them as there might be less space or more competition for resources. Some species may have nowhere left to move and ultimately, certain species will be disadvantaged by the changes while others will benefit.

Climate change is also expected to bring more combined heat waves and droughts, which would likely offset any benefits from the carbon fertilization effect. While crop yields often decrease during hot growing seasons, the combination of heat and dryness could cause maize yields to fall by 20 percent in some parts of the US, and 40 percent in Eastern Europe and southeast Africa. In addition, the combination of heat and water scarcity may reduce crop yields in places like the northern US, Canada, and Ukraine, where crop yields are projected to increase because of warmer temperatures.

Other effects of increased CO2

While some crop yields may increase, rising CO2 levels affect the level of important nutrients in crops. With elevated CO2, protein concentrations in grains of wheat, rice and barley, and in potato tubers decreased by 10 to 15 percent in one study. Crops also lose important minerals including calcium, magnesium, phosphorus, iron, and zinc. A 2018 study of rice varieties found that while elevated CO2 concentrations increased vitamin E, they resulted in decreases in vitamins B1, B2, B5 and B9. 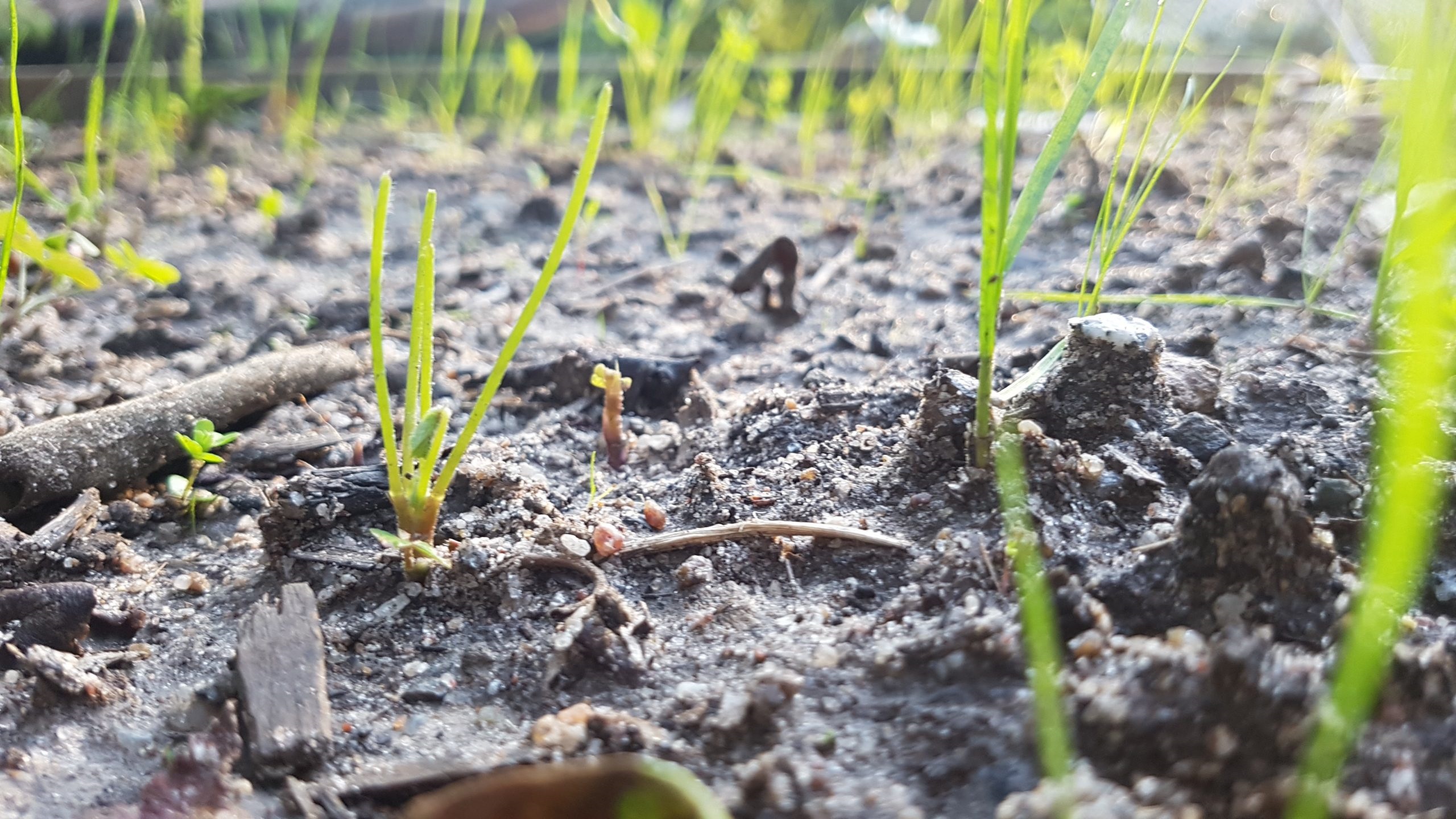 And, counterintuitively, the CO2-fueled increase in plant growth may result in less carbon storage in soil. Recent research found that plants have to draw more nutrients from the soil to keep up with the added growth triggered by carbon fertilization. This stimulates microbial activity, which ends up releasing CO2 into the atmosphere that might otherwise have stayed in the soil. The findings challenge the long-held belief that as plants grow more due to increased CO2, the additional biomass would turn into organic matter and soils could increase their carbon storage.

Many of the studies into the response of plant life to climate change seem to suggest that most plants will be more stressed and less productive in the future. But there are still many unknowns about how the complex interactions between plant physiology and behavior, resource availability and use, shifting plant communities, and other factors will affect overall plant life in the face of climate change.