Liang Lan
Marine and Environmental Scientist
Pangolins are the world’s most trafficked mammals, but there is evidence that they were the source of the new coronavirus – which could end the trade.

Covid-19 is a human disaster. However, for one group of animals, there may be a silver lining. Pangolins are one of the most heavily trafficked animals in the world, and as a result they are endangered. But in the past few weeks they have been linked to the initial outbreak of the Covid-19 disease in China. The evidence is inconclusive, but it has already prompted the Chinese government to take action. If more actions against the wildlife trade follow, the incident could prove to be a turning point for pangolin conservation.

A key question is where Covid-19 came from. Many animals carry coronaviruses and are potential sources of infection. That is important to know, if only because it should help us prevent future outbreaks. Several ideas have been proposed, but arguably the most dramatic is that pangolins were the source.

World’s most trafficked mammal
Pangolins look like scaly anteaters. Uniquely among mammals, their bodies are covered in hard protective scales made of keratin: the same material as our nails. They feed on insects such as ants and termites, and are often nocturnal and shy. While they look like anteaters, they are not closely related to them, and their closest living relatives are actually carnivorans: the group that includes wolves and cats.

There are eight species of pangolin. Four live in Africa and four in Asia. All are at risk of extinction, according to the International Union for Conservation of Nature (IUCN). Two of the African species are considered vulnerable and two are endangered. Of the Asian species, one is endangered while the other three are critically endangered.
Pangolins are illegally hunted and traded for two main reasons. First, their meat is considered a delicacy in several south-east Asian countries, especially China and Vietnam. And second, their scales are used in Chinese traditional medicine. As a result, they are the world’s most trafficked mammals.
The idea that pangolins gave us Covid-19 emerged at a press conference given by the South China Agricultural University in Guangzhou on 7 February. Two scientists there, Yongyi Shen and Lihua Xiao, were said to have compared coronaviruses from pangolins and from humans infected in the outbreak. The viruses’ genetic sequences were said to be 99% similar. One co-author, Wu Chen of Guangzhou Zoo, had previously helped show that Sunda pangolins carry coronaviruses.
However, the results had not been published at that stage, so other scientists could not examine them in detail. Meanwhile, there were many other possibilities. The virus could have come from an animal and seafood market in Wuhan, where many species were held. Animals in such markets are often kept in closely packed, unsanitary conditions, with many people nearby: a perfect opportunity for a virus to jump species. Many pointed the finger at bats: the virus is genetically similar to those in bats, and it would not be the first time a disease passed from bats to humans. There was also a study linking the virus to one found in snakes, but this is now considered unlikely.
Then there was a twist in the story. On 20 February the researchers posted a preliminary version of the study on the preprint site bioRxiv. The conclusions were radically different to what was described at the press conference. While the pangolin virus was “genetically related” to the one infecting humans, it was “unlikely to be directly linked to the outbreak because of the substantial sequence differences”. The 99% similarity was only in one region of the genome. Across the entire genome, the similarity was only 90.3%. There had been an “embarrassing miscommunication between the bioinformatics group and the lab group of the study”. When contacted by the Observer, Xiao declined to comment.

A halt to the wildlife trade?
However, the Chinese government was already lurching into action. On 24 February, China announced an immediate ban on trading and eating many wild animals, including pangolins. Officials began shutting down wild animal markets across the country.
This was the latest in a series of steps that ought to reduce the pangolin trade. Back in 2016, the international trade in pangolins was entirely banned by the 183 nations that signed up to the Convention on the International Trade in Endangered Species (Cites). All eight pangolin species were placed in Appendix I of the Convention, giving them the strictest protection currently possible.

However, so far this does not seem to have resulted in a drop in the number of pangolins traded, says Xu Ling, China director at wildlife trade monitoring group Traffic. The trade continues but the nature of the shipments has changed. “Before 2016 we could find frozen pangolin bodies, the meat smuggled in from other parts of south-east Asia to China,” says Ling. Nowadays most shipments are purely pangolin scales. Often they come from Africa, after being illicitly shipped out via Nigeria.

More recently, in August 2019, China’s state insurance providers announced that they would stop covering medicines made from pangolin scales. The move took effect in January 2020.

Against this background, it is unclear what impact China’s new ban on eating wild meat will have on pangolins. “Even without this ban, pangolin meat consumption was forbidden in China,” says Ling, as pangolins had protected status. This was reflected in the shift to importing scales. These are only legal if they come from certified sources but, as so often happens, the traders find ways around that. In the longer term, the loss of insurance funding may undercut the scale market. 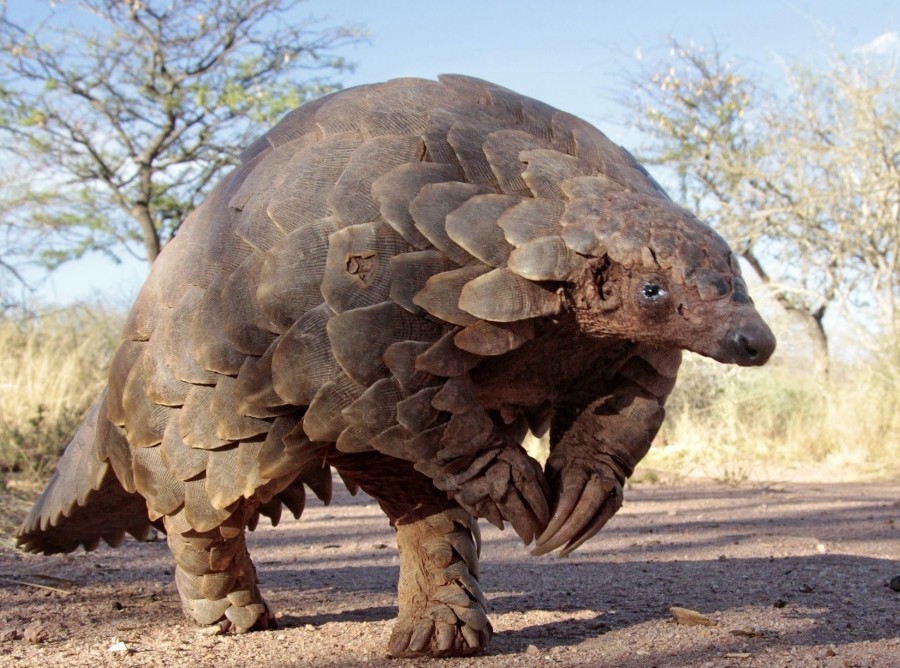 The truth about pangolins and Covid-19
Meanwhile, the idea that pangolins played a role in the emergence of Covid-19 has not gone away.

On 17 March, a team led by Kristian Andersen at Scripps Research in La Jolla, California, published a detailed analysis of the virus’s possible origin in Nature Medicine. They say the ultimate source is likely to be bats, just as it was for the two other coronavirus outbreaks of recent years: Sars and Mers. Bats are a known reservoir of coronaviruses. Furthermore, intermediate horseshoe bats are known to carry a virus called RaTG13, whose genome is 96% identical to that of Sars-CoV-2.

“It’s pretty clear the bat serves as the reservoir for this,” says Andersen. The question is how the virus travelled from bats to humans. “We are entertaining two different scenarios.”

The key question is how the virus acquired certain sequences of its genome, which allow it to bind strongly to human cells and thus infect them. The bat virus does not have these sequences.

One possibility is that the bat virus made the jump to humans several months before the outbreak was detected. These early viruses would not have been especially infectious or dangerous, but they could have mutated and evolved to acquire the key genetic sequences that made them infectious.
The alternative possibility is that there was an intermediate host. “That’s where the pangolins come in,” says Andersen. While the pangolin virus as a whole is less similar to Sars-CoV-2 than the bat virus, the pangolin virus genome does have the crucial binding sequences. This is what Shen, Xiao and their colleagues found – and it has now been supported by a further study from another Chinese group.

Furthermore, a study published on 26 March in Nature discovered viruses closely related to Sars-CoV-2 in pangolins that had been smuggled into China. These viruses had binding sequences similar to those in the human viruses.

“Where it’s really important is where they’re identical,” says Andersen. “While the bat virus overall is more similar, in the regions where it really matters it’s actually quite different.”

This suggests that the bat and pangolin viruses met, perhaps in the same host, and exchanged genes. Some of the bat viruses ended up with the key binding sequences from the pangolin viruses, enabling them to infect humans and unleash a pandemic. “Recombination is frequent in these types of viruses,” says Andersen. “It’s speculative, but it’s highly likely that that’s how we ended up with this new virus.”

A similar story played out before the Sars outbreak of 2002-2004. The original source of the virus was wild bats, and in 2017 researchers managed to identify a cave in China where the bats carry viruses that are virtually identical to Sars. However, the virus was probably passed to humans via civets, which are cat-like animals, leading to China imposing a temporary ban on selling civets. The more recent Mers outbreak probably moved from bats to humans via camels.
However, says Andersen, we cannot yet be sure which scenario is correct. Even if there was an intermediate host, it may not have been pangolins.

“We cannot conclude if pangolins are indeed [the] intermediate species,” agrees virologist Arinjay Banerjee of McMaster University in Hamilton, Canada.

Ending demand
The question of whether pangolins contributed to the Covid-19 outbreak will not be settled any time soon. “It’s probably going to be a long, drawn-out question,” says Andersen. Resolving the origin of Sars took years.

But it may be crucial to ending the pangolin trade, because doing so requires two things. The first is strict enforcement of the rules, which China seems to want to do – it was stepping up enforcement even before the outbreak. The second is for people to stop buying pangolin products. If there is no demand, the illegal trade will become unprofitable, and suppliers will abandon it.

“Just the fact there’s been all this publicity about the potential link to pangolins will probably lead to plummeting demand for them,” says Richard Thomas, head of communications at Traffic in Cambridge.
There is evidence that he is right. According to Yuhan Li of the University of Oxford, Chinese conservation organisations have been circulating a questionnaire on social media to see how people’s attitudes have shifted. More than 100,000 people have responded, and more than 90% say they would support a total ban on the trade in wild animals, no matter what the intended purpose. It is unclear if people will stick to this once the Covid-19 crisis has passed, but Ling is planning a campaign to strengthen opposition.

The realisation that wildlife markets allow diseases to spread to people may spur action. When China announced the ban, the World Wide Fund for Nature (WWF) called it “a timely, necessary and critical step” – not just for safeguarding the wild animals, but for human health. “This public health crisis must serve as a wake-up call to end the unsustainable use of endangered animals and their parts, whether as exotic pets, for food consumption or for their perceived medicinal value.”

In the best-case scenario, it will not just be pangolins that benefit. Reducing the demand for illegally traded wildlife will help many species – and protect us all from future pandemics into the bargain.