Hannah Steiner
marine wildlife conservation and environmental activist
Habitat loss—due to destruction, fragmentation, or degradation of habitat—is the primary threat to the survival of wildlife.

Habitats are the physical, chemical and biological systems that support living things (plants, animals and fungi). More simply put, habitats are the places where these organisms live. This is the living area necessary for an ecosystem to remain healthy. Habitat loss refers to the disappearance of natural environments that are home to particular plants and animals. So, when we put the two definitions together we get: habitat + destruction = a home to species that has been changed to the point it no longer exists.

Habitat destruction is our biggest issue that the whole world is facing. Habitat loss is a serious problem for wildlife and humans alike. As Wildlife Habitat Without habitat, there is no wildlife. It's that simple and without wildlife, there is no healthy functioning of the ecosystem services upon which we depend on. Imagine waking up one day, only to discover that everything you’ve always known has instantly changed. The home you’ve lived in for your entire life is gone, and you find yourself in areas that are unfamiliar to you. All around you are elements that could easily cause you harm and there is no escaping. This scenario would be overwhelming. Yet, this is what happens every day to wildlife and underwater species as their habitats are destroyed.

Habitat destruction occurs when enough change has happened to an area that it can no longer support the natural wildlife. This change can actually be in many forms. But no matter how it happens, the plants, animals, and other organisms whose habitat has been destroyed no longer have a home. Ecosystem destruction is already happening. 25% of our coral reefs have disappeared and it is expected that 60% more will be gone in 30 years.

Human development leads to habitat fragmentation, as wild areas are carved up and split into smaller pieces. Habitat fragmentation is the spatial separation of habitats from a previous state of greater continuity. The 'cutting up' of habitats into fragments is mainly caused by agricultural land conversion, urbanization, dams, water diversions, pollution, invasive species and deforestation, but can also be caused by geological processes that slowly alter the layout of the physical environment. Fragmentation reduces animal ranges and restricts movement, placing animals in these areas at higher risk of extinction. Breaking up habitat can also separate animal populations, reducing genetic diversity. According to NWF, "These fragments of habitat may not be large or connected enough to support species that need a large territory in which to find mates and food. The loss and fragmentation of habitat make it difficult for migratory species to find places to rest and feed along their migration routes," or to even make it across these ancient and essential migratory paths to begin with.

When natural habitats are no longer able to support the species present, resulting in the displacement or destruction of its biodiversity, we would say Habitat destruction occurs. Examples include harvesting fossil fuels, deforestation, dredging rivers, bottom trawling, urbanization, filling in wetlands and mowing fields. Although habitat destruction primarily causes species extinctions, it can also open up new habitat that might provide an environment in which new species can evolve, thus demonstrating the resiliency of life on Earth. Sadly, humans are destroying natural habitats at a rate and on spatial scales that exceed what most species and communities can cope with. 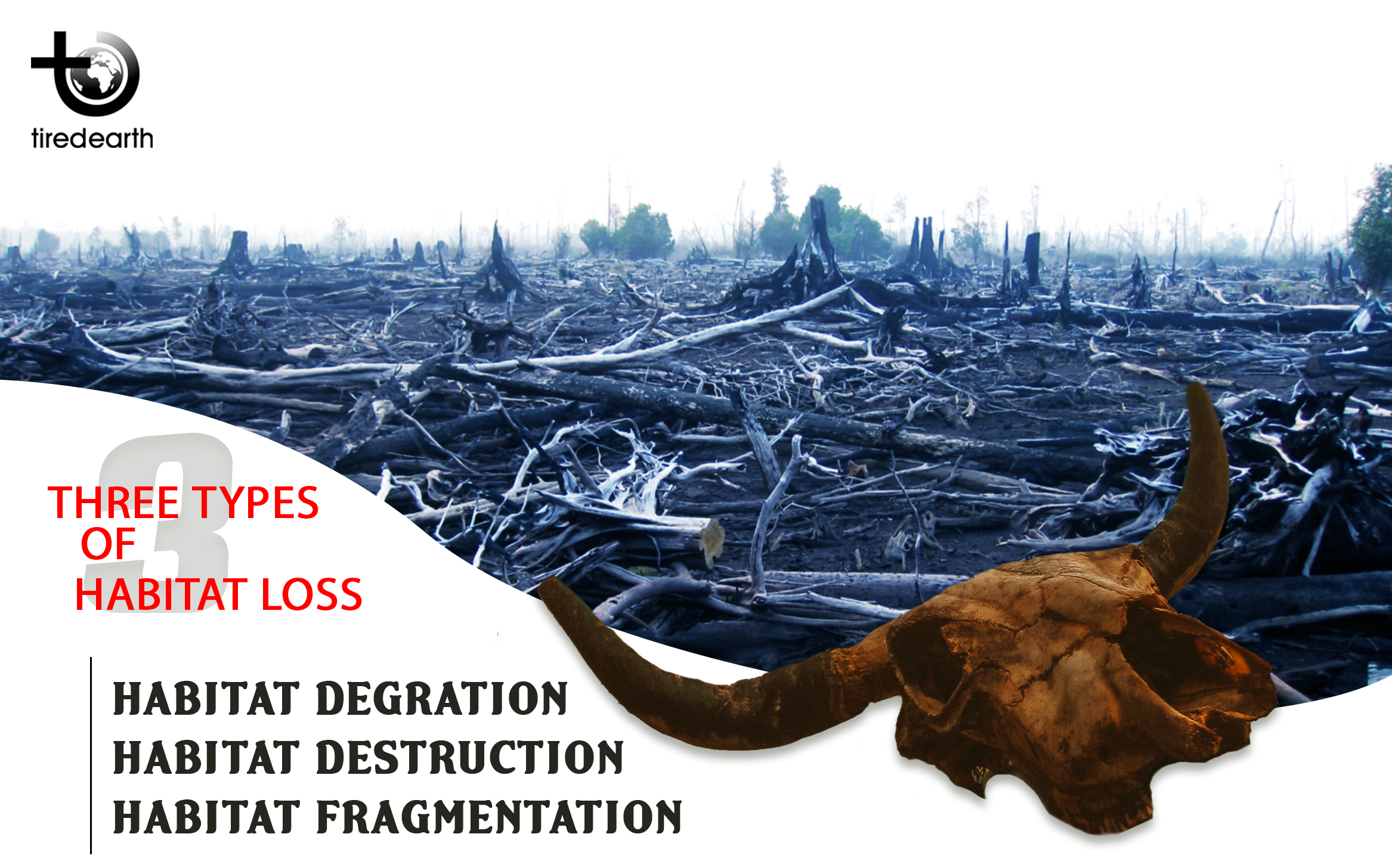 Habitat degradation is another consequence of human development. A degraded habitat may remain intact, but its degraded state may render it incapable of functioning properly and lead to species extinction or migration. Habitat degradation is fueled by a fast-growing human population. As the population increases, humans use more land for agriculture and for the development of cities and towns spread out over ever-widening areas. The main causes of habitat degradation is pollution, invasive species, diminished resources, such as water and food, logging, mining, destructive fishing practices and the disruption of ecosystem processes, such as altering the intensity and frequency of fires in an ecosystem. These are some of the ways habitats can become so degraded that they no longer support native wildlife.

Habitat loss is one of the biggest challenges that humans are faced with. That’s why from the past it was suggested by many religions to preserve our planet and protect it from any danger. There is a close relationship between religion and ecosystem. Religions have had major positive influences on the natural environment.  Almost all religions address the issue of the creation of the universe in different forms and with varying degrees of clarity or detail. However, all religions agree that the creation is an act of God and should be treated as such. Jewish tradition teaches us to care for our planet in order to preserve that which God has created. Psalm 24 notes, "The earth is the Lord's and the fullness thereof," a dramatic assertion of God's ownership of the land. It follows, then, that any act that damages our earth is an offense against the property of God. The Jewish concept of bal tashchit, "do not destroy," forbids needless destruction.

There are approximately hundred verses in the bible that talk about protection of the environment. Christians therefore have environmental responsibility and encourage behavioral change for the good of the future. Christians increasingly recognise the need to repent for what harm has been done to creation. In the words of the Orthodox Patriarchate, ‘This may well mean that just as a shepherd will in times of greatest hazard lay down his life for his flock, so human beings may need to forego part of their wants and needs in order that the survival of the natural world can be assured. The challenge to all Christians is to discover anew the truth that God’s love and liberation is for all creation, not just humanity, and to seek new ways of living that restore balance and hope of life to the endangered planet.

Furthermore, the earth is mentioned about 453 times in the Qur’an, whereas sky and the heavens are mentioned only about 320 times. Islam does understand the earth to be subservient to humankind but it should not be administered and exploited irresponsibly. Islam teaches that Allah created humans to be guardians of His creation. In other words, nature does not belong to us to do with as we wish, but is entrusted by Allah to our safe-keeping. ‘The world is green and beautiful, and Allah has appointed you his guardian over it,’ taught the prophet Muhammad. The central concept of Islam is unity. Allah is unity, and His unity is reflected in the unity of humanity and nature. We must therefore maintain the integrity of the Earth, its flora and fauna, its wildlife and environment. Our responsibility is to keep balance and harmony in Allah’s creation. Islam teaches that we will one day be judged by Allah for how we have discharged our responsibilities following the guidance of Islam. Have we been good trustees, and have we kept nature in harmony? So there will be a day of reckoning.

Obviously all religions need to be involved with the development of a more comprehensive worldview and ethics to ground movements toward sustainability. Whether from an anthropocentric or a biocentric perspective, more adequate environmental values need to be formulated and linked to areas of public policy. Scholars of religion as well as religious leaders, and laity can be key players in this articulation process.

Cryptocurrency mining has a huge carbon footprint. Here’s what experts think we should do about it.

Empathy and the environment