Liang Lan
Marine and Environmental Scientist
While we all know things on Earth are generally getting hotter, heat isn't the only factor influencing how hot we actually feel.

Due to changing environmental conditions and quirks of our physiology, heatwaves are feeling up to 10°C (18°F) hotter than traditional measures imply, new research discovered.

The US National Weather Service (NWS) uses apparent temperature – also called the heat index – to measure what these environmental conditions feel like to us physiologically.

But the new weather extremes we're facing today have pushed the system's fringes to breaking point. In turn, the physiological responses of sweating and cooling would influence our brain's estimates of the relative temperature.

Physicist Robert Steadman calculated the heat index scale in 1979 by measuring how different temperatures impact the blood flow in our skin under different levels of humidity.

So at an average humidity of around 70 percent, a typical human body in the shade would experience 20°C as 20°C.

At higher temperatures, the body would increasingly rely on its evaporating sweat to cool down, making it feel hotter than it really was.

A temperature of around 30°C, for example, might seem more like 34.5°C. At elevated humidities, this disparity only worsens.

The humidity factor is one of the reasons the UK struggled with its recent heatwaves, even though it only reached temperatures other places in the world would consider fairly standard for summer.

The higher the humidity, the harder it is for our bodies to use sweat to cool us down through evaporative cooling. Our bodies also flush our blood through veins closer to our skin's surface to dissipate heat.

A study earlier this year found that we're even worse at tolerating combinations of high heat and humidity than we previously thought, with an upper-temperature limit of just 31°C at full humidity.

And unfortunately for us, for every degree Celsius our atmosphere is warming, water vapor also increases by around 7 percent.

The NSW relies on the heat index to issue public warnings on a regular basis, and researchers use it to estimate the physiological impacts of future warming.

Under most circumstances, this measure accurately represents how these environmental conditions affect us. However, the heat index was never designed for the extremes of both heat and humidity we're facing today – extremes that are becoming more severe and increasing in frequency.

For example, a relative humidity of 80 percent was only mapped physiologically for temperatures between 15-31°C, but temperatures now rise above 32°C for weeks at a time in some parts of the US.

Simply extending the calculations by applying the same formula to the more extreme conditions unfortunately does not match what happens physically to our bodies.

"Most of the time, the heat index that the National Weather Service is giving you is just the right value. It's only in these extreme cases where they're getting the wrong number," explains climate physicist David Romps from the University of California, Berkeley.

"When you start to map the heat index back onto physiological states and you realize, oh, these people are being stressed to a condition of very elevated skin blood flow where the body is coming close to running out of tricks for compensating for this kind of heat and humidity. So, we're closer to that edge than we thought we were before."

For the most sweltering days, we're now experiencing this measure is up to 10°C off.

So earlier this year, Romps and UC Berkeley physicist Yi-Chuan Lu extended the heat index for all temperatures and all humidity levels by considering our physiology too.

"The original table had a very short range of temperature and humidity and then a blank region where Steadman said the human model failed," says Lu. "Steadman had the right physics. Our aim was to extend it to all temperatures so that we have a more accurate formula."

Steadman's model breaks when 100 percent humidity at the skin's surface prevents us from sweating further. By recognizing that we continue to replace the sweat that drips free as well, the formulae Steadman devised could be pushed into new limits of temperature and humidity.

"I'm no physiologist, but a lot of things happen to the body when it gets really hot," says Romps. "Diverting blood to the skin stresses the system because you're pulling blood that would otherwise be sent to internal organs and sending it to the skin to try to bring up the skin's temperature. The approximate calculation used by the NWS, and widely adopted, inadvertently downplays the health risks of severe heat waves." 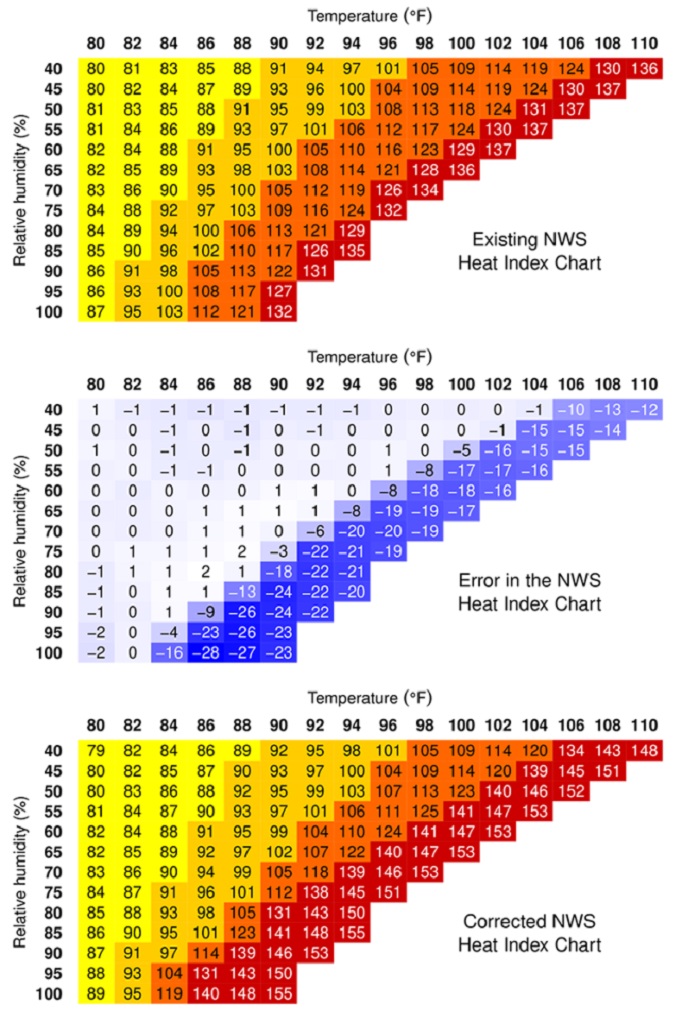 In their newest paper, the team applied their updated heat index to the top 100 heat waves between 1984 and 2020. They identified the Midwest as the home to the most physiologically hazardous heat in the US, not the South as previously reported.

The soils of the Midwest were known to be moist during its most severe heatwaves, including a particularly severe one in July 1995 – indicative of the high humidity that helped cause 465 deaths.

The old index suggested people would have experienced a 90 percent increase in their skin blood flow, whereas the new index now shows that it was more like a 170 percent increase. And this was for people in the shade.

As heat waves are already the top weather-related cause of death in the US, particularly impacting older adults and those who must work outside, and the conditions are only set to worsen, the heat index is a vital measure to get right.

"A 200°F [93°C] heat index is an upper bound of what is survivable," says Romps. "But now that we've got this model of human thermoregulation that works out at these conditions, what does it actually mean for the future habitability of the United States and the planet as a whole? There are some frightening things we are looking at."

This research was published in Environmental Research Letters.