Rebecca Herbert
Climate Activist
Wildfires in 13 U.S. states have burned through 2,919 square miles, over half the size of Connecticut, the Associated Press reported.

Over 20,000 firefighters and support personnel battled 97 large active wildfires, the National Interagency Fire Center said. Montana had 25 active wildfires, followed by Idaho with 21, Oregon with 13, and California with 11.

"Crews are working tirelessly to ensure we are as prepared as we can be for the extreme fire weather forecast for the next couple days," the U.S. Forest Service said.

Thousands of firefighters have prepared for a tougher fight against California's largest wildfire as extremely dangerous weather returns, threatening to stoke flames into explosive growth.

Firefighters were able to save homes and hold large stretches of the blaze, but a red flag warning was scheduled for Wednesday afternoon through Thursday because of hot, bone-dry conditions with winds up to 40 mph. That could drive flames through timber, brush and grass, especially along the northern and northeastern sides of the vast wildfire.

"I think we definitely have a few hard days ahead of us," said Shannon Prather with the U.S. Forest Service.

Firefighters prevented flames on Monday from reaching homes in the small Northern California community of Greenville near the Plumas National Forest as the 3-week-old fire grew to over 395 square miles (1,024 square kilometers) across Plumas and Butte counties.

On Tuesday, spot fires jumped some of the perimeters and burned several acres of brush on the western side of the blaze, even though crews had cut back areas of unburned fuel with bulldozers and dumped some 230,000 gallons (870,600 litres) of fire retardant, said Mike Wink, a state fire operations section chief.

Heat from the flames also created a pyrocumulus cloud, a massive column of smoke that rose 30,000 feet (10,000 yards) in the air, he said.

The fire has threatened thousands of homes and destroyed 67 houses and other buildings since breaking out July 14. It was 35 percent contained.

About 150 miles (240 kilometers) west of California's Dixie Fire, the lightning-sparked McFarland Fire threatened remote homes along the Trinity River in the Shasta-Trinity National Forest. The fire was only 5 percent contained. It was burning fiercely through drought-stricken vegetation and had doubled in size every day, fire officials warned.

Similar risky weather was expected across Southern California, where heat advisories and warnings were issued for interior valleys, mountains and deserts for much of the week.

Heat waves and historic drought tied to climate change have made wildfires harder to fight in the American West. Scientists say climate change has made the region much warmer and drier in the past 30 years and will continue to make weather more extreme and wildfires more frequent and destructive.

In Hawaii, firefighters gained control over the 62-square-mile (160-square-kilometer) Nation Fire that forced thousands of people to evacuate over the weekend and destroyed at least two homes on the Big Island.

In southern Oregon, lightning struck parched forests hundreds of times in a 24-hour period, igniting 50 new wildfires. But firefighters and aircraft attacked the flames before they spread out of control and no homes were immediately threatened. 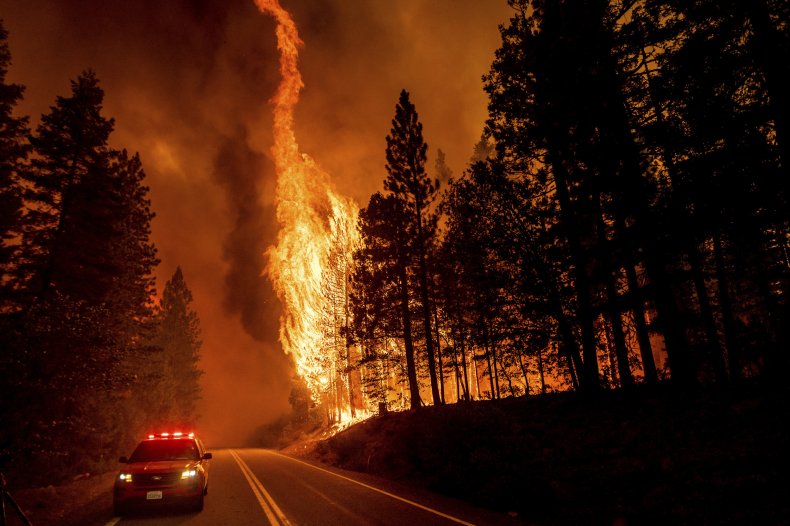