Liang Lan
Marine and Environmental Scientist
Governmental actions have fueled skepticism about Brazil’s real commitment to its climate goals and pledges the country embraced at the COP26 U.N. climate summit. In 2021, the Brazilian Amazon experienced the highest deforestation rates in 15 years, almost all of it illegal, amid a weakening of environmental protections. Bills currently before Brazil’s parliament threaten to undermine these protections even further and incentivize logging and land grabbing.

At the COP26 climate summit last month, when Brazilian Environment Minister Joaquim Leite announced the country would update its climate goalshttps://www4.unfccc.int/sites/NDCStaging/Pages/Party.aspx?party=BRA to include zero illegal deforestation by 2028 (replacing the previous pledge for 2030), local environmentalists, researchers and policy specialists expressed skepticism. Their concern, conveyed on social media and in news interviews, was that the country would legalize deforestation that is illegal today.

“If all deforestation is legal, then you have zeroed illegal deforestation quite successfully,” says Suely Araújo, senior public policy specialist at Observatório do Clima, a civil society coalition focused on climate change.

The suspicion is not unfounded.

In April, a day after promising to double investments for combating deforestation at U.S. President Joe Biden’s Leaders Summit on Climate, Brazilian President Jair Bolsonaro approved a cut in the environment ministry’s budget by 24% from the 2020 allocation. The move shrank what was already a meager budget, making the environment ministry’s 2021 budget the smallest in two decades, according to a report from Observatório do Clima.

That same month, the ministry’s Chico Mendes Institute of Biodiversity Conservation (ICMBio) almost had to suspend forest firefighting efforts because of lack of funding, despite the surge in burning last year. ICMBIO serves as the Environment ministry’s administrative arm in charge of the conservation of protected areas, and is one of the main institutions responsible for enforcing environmental protection laws in the country. 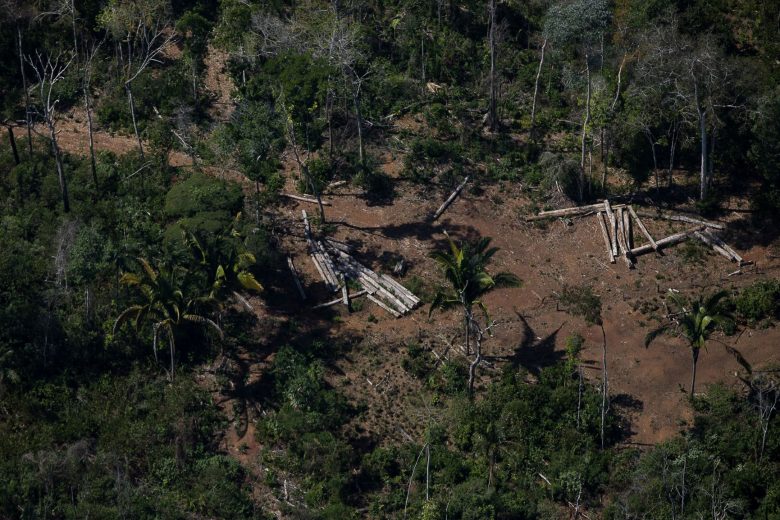 Logs of wood seen in a deforested area near Porto Velho, Rondônia, Brazil in 2020. Image by Bruno Kelly/Amazônia Real via Flickr (CC BY-NC-SA 2.0).

The unraveling of these protections hasn’t slowed down.

In early December, Bolsonaro’s national security adviser, Augusto Heleno, allowed gold mining companies to operate in a still untouched region of the Amazon rainforest – despite the forest having the highest deforestation rates since 2006. According to data from the National Institute for Space Research (INPE), the Brazilian Amazon lost more than 13,000 square kilometers (5,000 square miles) in 2021, an area twice the size of Luxembourg.

Araújo says almost all of this deforestation is illegal.

“When you cross deforested area imagery and logging permits from federal and state authorities, very little intersect. Estimates are that 90% of deforestation in Brazil is illegal, and it goes mostly unchecked partly because states don’t feed precise data to Sinaflor, the national system that controls the origin of forest products, active since 2014,” she says.

Araújo also notes that whether it’s legal or illegal, all deforestation results in greenhouse gas emissions. “If everyone decides to log all areas where clear-cutting is legally allowed across all Brazilian biomes today, this would [be] equal to throwing a carbon dioxide bomb at the atmosphere. Almost half our emissions come from land change use already,” she adds.

“Weak law enforcement is an incentive for loggers and land grabbers,” says Natalie Unterstell, head of Política por Inteiro, an initiative that monitors climate and environmental policy in Brazil. 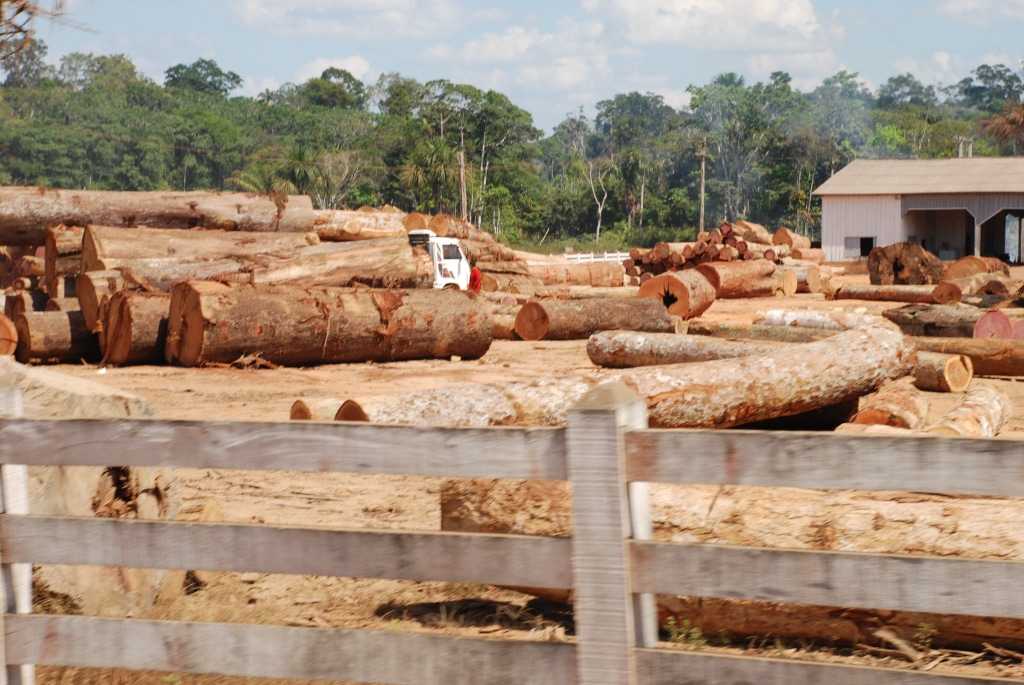 An illegal timber site in the State of Rondônia, Brazil, 2007. Image by Joelle Hernandez via Flickr (CC BY-NC-ND 2.0).

A recent analysis by O Estado de S. Paulo, one of Brazil’s leading newspapers, found that the number of environmental fines imposed under the Bolsonaro administration was the lowest in two decades. Between 2000 and 2010 the country recorded 20,000-25,000 environmental fines a year. Since 2019, when Bolsonaro took office, it has barely broken 10,000 a year.

“Joaquim Leite did not reverse former [environment] minister Ricardo Salles’s measures, and despite the rise in deforestation, fines are still frozen and loggers are getting away with it,” Unterstell says.

Furthermore, bills currently before the Brazilian parliament threaten to weaken environmental policy even further, Araújo and Unterstell say. “If they come into force, these proposals can set dangerous precedents and foster statutory insecurity for those who abide by the law,” Unterstell says.

One of these bills, known as PL 2633/20, addresses land tenure legislation. It aims to expand the area of public lands that can be regularized without undergoing an inspection by any authority. Under this bill, the decision to grant tenure over a parcel of land would be based on documental analysis and on a declaration from the petitioner saying they respect environmental legislation.

“Several studies point [out] that this bill could benefit land grabbers, as they are set to be waived for illegally occupying public lands. A significant portion of deforestation takes place on grabbed land,” Unterstell says.

“If our agrarian reform authority, INCRA, were working properly, a bill like this would not even have space for debate,” Araújo adds.

She says another bill that would be a hard blow to environmental legislation in Brazil is PL 3729/2004, which aims to reformulate environmental licensing. “We do need to standardize how licensing is done in Brazil, but this proposal seeks just to remove barriers for businesses to operate, not to set up a solid, serious environmental law. It sees licensing as a hurdle,” Araújo says. She adds the bill would exempt 14 types of businesses from licensing requirements, “with ambiguous [wording] that could cause trouble in the future, that includes almost every kind of construction, from a gully on a road to a dam like Belo Monte.” 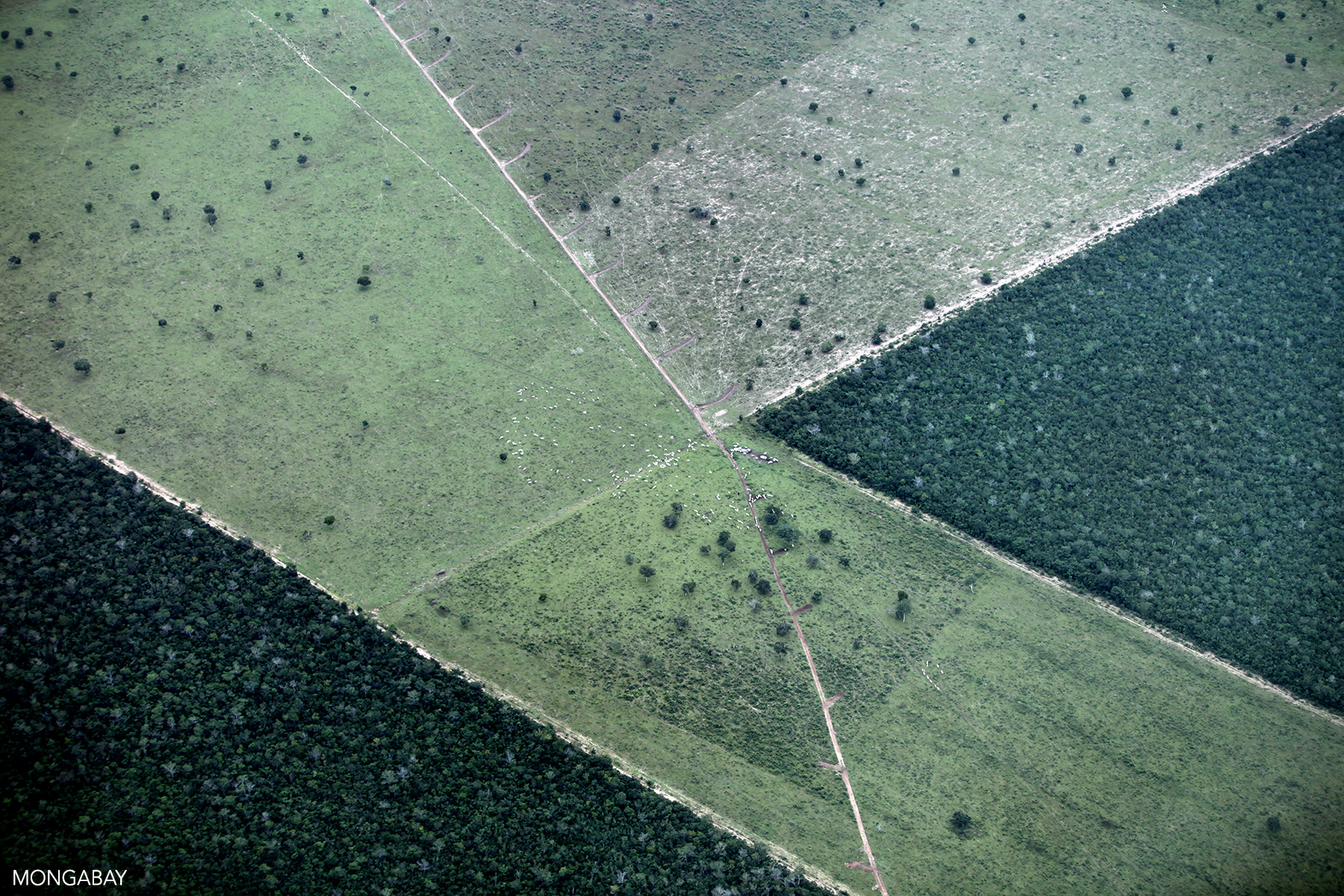 Deforestation for agriculture in Brazil. Image by Rhett A. Butler / Mongabay.

Araújo says another point of concern in the bill is the so-called self-licensing provision, or licensing by “adhesion to commitment.”

“Companies [would be] exempt from presenting environmental impact studies to get a license to operate, depending on the type of business they represent,” Araújo says. “In principle, this should be valid for minor constructions of very low impact. But the way the bill is written, about 90% of licensing requests would be waived.”

Both bills have been approved in Brazil’s lower house of parliament, the Chamber of Deputies, and are now awaiting a vote in the Senate, which looks likely to pass.

“As the government has a majority in [parliament], these bills would be really hard to stop,” says Araújo. “They are full of unconstitutional bits and this could spark a long judicial fight. But still, that would be a hard backtracking to reverse.”