George Scott
Editor- environmental activist
Environmental disasters are increasingly a fact of life around the world. Each year, floods, droughts and landslides affect tens of millions of people, leaving vast human and economic destruction in their wake. The cost in human lives and livelihoods each year is enormous.

Yet their labelling as “natural” disasters or “acts of God” has cast them as difficult to predict and prevent. As the impacts of climate change are felt more and more clearly, their severity is expected to worsen and their predictability diminish. As global temperatures continue to rise, we are facing a future world increasingly defined by disaster.

We’re increasingly aware of the link between these extreme events and the carbon emissions from our power generation, transport and food production. But one important aspect that’s often overlooked is overseas trade. By purchasing goods made abroad, we effectively outsource our emissions – with consequences for those places increasingly affected by environmental disasters.

In a newly published report, Disaster Trade, I and other experts in supply chain analysis, embodied emissions and construction considered the environmental and human impacts of international trade. We demonstrated that our trade has not only a carbon footprint but also a “disaster footprint”.

The UK and many other wealthy European countries have committed to ambitious emissions targets with apparent success. Yet once you consider overseas trade, the achievements of such policies are grossly overstated.

Many of the environmental gains achieved by major polluters derive not from sustainable emissions reductions, but from moving carbon-intensive processes to manufacturing bases in developing countries. Clothes or building materials used in the UK still need to be made, but their production overseas allows the emissions associated with their manufacture to be regulated less stringently and accounted for less carefully. 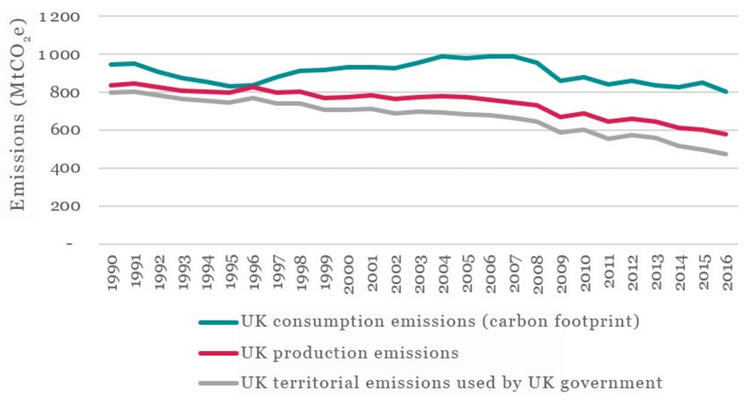 Consequently, while emissions produced within the UK’s borders declined by 41% between 1990 and 2016, the emissions from products British people consume declined by just 15%. As of 2016, almost half of UK emissions were produced overseas, compared with 14% in 1990.

Worse still, the process of moving these emissions creates emissions of its own. A nation’s carbon footprint is increasingly global, mobile, and harder to define as a result.

Indeed, there is a growing recognition that national accounting of carbon usage may lie at the root of the more generalised failure to make concerted inroads into carbon emissions. The ability of wealthier countries to effectively outsource emissions to less wealthy ones has been described as “carbon colonialism”.

There is increasing unease over the effectiveness of emissions targets based on what countries produce themselves, which allow ever more greenhouse gas emissions to “flow through the carbon loophole” of international trade.  In total, imported emissions now account for a quarter of global CO₂ emissions, making this the next frontier of climate policy.

Yet the carbon footprint alone doesn’t tell the whole story. As emissions continue to rise globally, increasing the risk of natural hazards such as droughts, floods and landslides, the related impact of trade and investment from high-consuming countries is worsening. And these risks tend to be higher in poorer, exporting countries than in the richer countries who buy their goods. 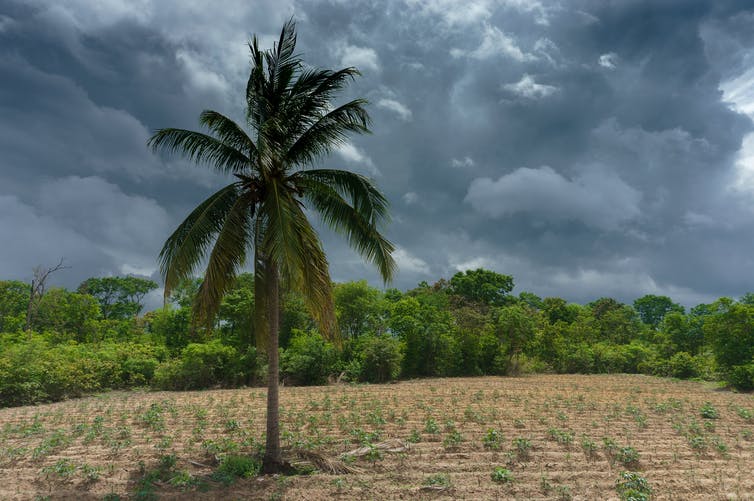 In Cambodia for instance, from where the UK imports 4% of its garments, factories providing clothes for the British market are linked to carbon-intensive energy generation, large-scale deforestation, and mismanagement of water resources, intensifying the impacts of drought.

In South Asia, from where the UK imports a growing proportion of its bricks, brick production plays a major role in degrading the environment, engendering droughts and floods, while undermining agricultural livelihoods.

In Sri Lanka, a major exporter of tea for the British market, a combination of increasingly intense and unpredictable rainfall, with degrading housing infrastructure progressively weakened by these conditions, has translated into a tragic propensity to landslides. 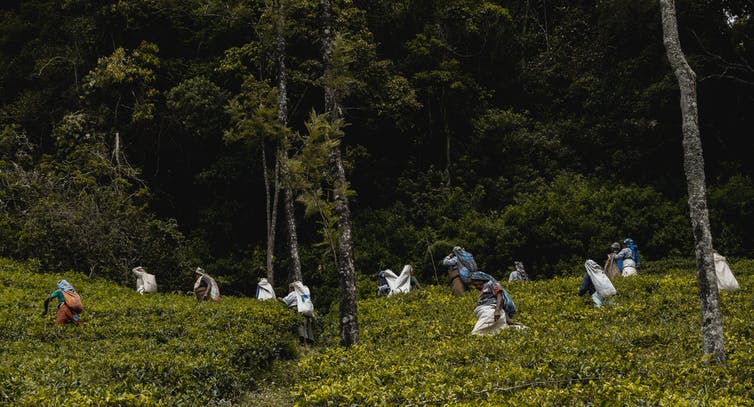 Climate change impacts, including the disasters of droughts and floods, are therefore effectively traded out by wealthier countries and imported by less wealthy ones as the price of economic growth. All the while, this environmental degradation remains hidden by an emphasis on the nation state, which is no longer appropriate for a globalised and interconnected world. In view of this, what is necessary is a new conception: one that recognises disasters not as autonomously emergent or globally induced, but as rooted in specific process of industry, trade and consumption.

By degrading environments in this way, international trading practices channel and intensify the impacts of climate change and make natural disasters more likely. The result is that when the UK and other countries import goods, they are effectively exporting disasters, not only contributing to climate change globally, but also exacerbating its impacts in specific locations. Yet despite the severity of this global disaster footprint, the environmental impacts of trade are not recorded in the UK’s statistics or strategies on climate change.

As our new report shows, disasters may be unpredictable, but they are anything but random. As the climate continues to change, the global systems we depend upon in our everyday lives will play an ever greater role in shaping the incidence and intensity of disasters they help create in developing countries.