Rebecca Herbert
Climate Activist
As the world heats up so does the demand for air conditioning, which itself is a contributor to the climate crisis.

At first glance, the 32 panels on top of a grocery store in Stockton, Calfornia look like solar panels. But this installation is designed not to harness the sun, but to defy it. Coated with a film technology that reflects radiation from the sun, the panels – and whatever lies beneath them – can drop to 15F (8C) below the ambient temperature, even in the middle of the day, with no electricity required.

It is “a fundamentally different way of achieving cooling and harnessing an untapped renewable resource”, said George Keiser, chief operating officer of SkyCool, the company behind the panels. “We’re using the sky as this enormous heat sink,” said Keiser, sending excess heat from the surface of the Earth, through the atmosphere and into outer space.

At the grocery store, the panels are used to cool water running behind them, which is then piped into the condensers that run the store’s refrigerators. That lowers the temperature of the refrigerants inside, increasing efficiency and reducing yearly energy consumption by 15%.

SkyCool’s technology has also been installed on bus shelters in Tempe, Arizona, to keep commuters cool as they wait.

“The long-term goal is to see if we can come up with ways to use either the films or the panels to replace an air conditioner,” said Eli Goldstein, the startup’s co-founder and chief executive. 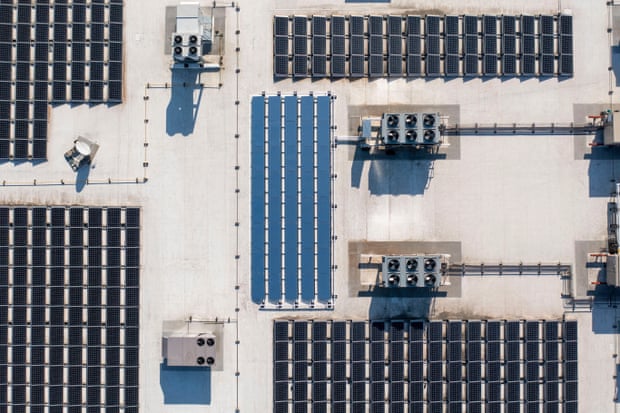 Extremely hot weather kills about 700 people in the US each year – more than hurricanes and floods combined – and an estimated 356,000 around the world.

Air conditioning is the most obvious immediate response to the dangerous warming of the planet. It’s also making it worse.

Air conditioners use more electricity than any other appliance in the home. They consume 10% of global electricity (together with electric fans) and leak potent planet-warming gases into the atmosphere. On the hottest day of the year in some parts of the US and the Middle East, 70% of peak residential electricity demand is for cooling spaces.

As global temperatures rise and heatwaves become more common and more deadly, the demand for air conditioners is increasing, especially in emerging economies such as India, China and Indonesia.

The International Energy Agency (IEA) estimates that global demand for space cooling will more than triple by 2050. The growing cooling demand is “one of the most critical energy issues of our time”, according to the IEA’s 2018 report, which concludes that to keep people cool without spiraling energy demand, the answer “first and foremost” is to improve the efficiency of air conditioners.

But that’s not all it will take. To temper the effects of dangerous heat without heating up the world even more will require a spectrum of solutions, from more efficient ACs to shadier streets, to new technologies that fundamentally change the way we stay cool. 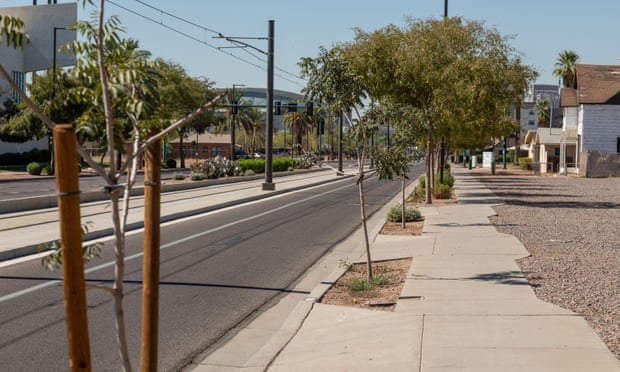 Most ACs are relatively cheap and extremely inefficient. The energy performance standards the machines are required to meet don’t come close to maximizing their potential, said Iain Campbell, senior fellow at the sustainability nonprofit Rocky Mountain Institute, and 95% don’t exceed the bare minimum.

Another big problem with air conditioners is that they leak hydrofluorocarbon refrigerants (HFCs), powerful planet-warming gases and a major contributor to global heating, into the atmosphere. The most commonly used – R-410A – is more than 2,000 times more potent than carbon dioxide.

As the machines work, the refrigerant travels in tubes between areas of low and high pressure, turning into a gas as it absorbs heat from inside and releases the heat outside as it condenses back into a liquid. In its gas form, HFCs can seep out through joints in the piping (a typical residential unit might lose 10% of its refrigerant each year) or can be released entirely if an air conditioner is thrown away without being properly drained.

In 2018, the Rocky Mountain Institute launched the Global Cooling prize, offering a $1m prize for new residential cooling technology that is five times more efficient and less polluting than today’s standard machines, costs no more than twice as much for consumers and can be installed in existing homes.

The two winning prototypes, announced in April and produced by two of the world’s largest cooling manufacturers – Daikin and Gree – work fundamentally the same way as today’s air conditioners, but are engineered with better sensing and controls and are configured to use more environmentally friendly refrigerants than those found in standard residential AC units. They have also added features, such as engineering to remove excess moisture from the air to make it easier to cool (it takes more energy to heat humid air).

The winners say they will bring their designs to market by 2025. But until policymakers in the US and abroad raise the floor on efficiency standards for AC units, said Campbell, there’s no clear way for consumers to discern the difference between these new machines and those that are less efficient and have a far greater climate impact.

Mechanical engineer Vince Romanin realized that few consumers research air conditioner efficiencies or specific refrigerants before buying, which is why he markets his AC technology on user experience, rather than environmental credentials.

“There are about 50 million people in the US with a window AC, and almost all of them hate them,” said Romanin, CEO of Gradient. Configured to straddle the window sill, with the noisy bits outside and the tech housed below the window, Gradient’s machine is not “loud and ugly”, said Romanin, and it doesn’t block your view.

Gradient uses a lower-emissions refrigerant packed in factory-sealed, leak-proof tubing. Coming to market next year, it’s two appliances in one: the heat pump system that replaces hot air with cool in the summer works in reverse to make it a space heater in the winter. 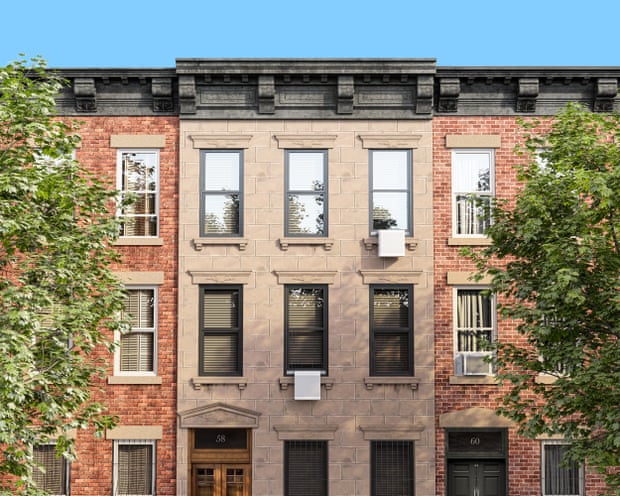 Campbell is excited about the potential of new materials to push cooling technology even further. Cooling prize finalist Transaera is developing a “novel sponge-like” material that could improve air conditioners’ efficiency by passively sucking moisture out of the air. But until governments impose standards that rate ACs on how efficiently they reduce humidity, Campbell said, manufacturers lack incentive to include the tech in their products.

Irish clean tech company Exergyn is among those developing systems that replace harmful, leaky refrigerants with solid materials that contract and relax as they absorb and release heat. Solid state refrigerants have “significant promise”, Campbell said, but they need more testing to prove they can last as long.

Better air conditioners alone can’t solve the growing heat crisis, but they’re an important part of the puzzle, said Campbell, especially for the growing urban populations around the world.

There are many other things you’d ideally do first, he said. That includes designing buildings that use less energy, have better ventilation and are better insulated from heat.

“If you want to cool people, you have to provide shade, period,” said V Kelly Turner, assistant professor of urban planning at UCLA’s Luskin School of Public Affairs. Whether that’s in the form of trees or canopies, people’s bodies need to be protected from the direct heat of the sun.

There’s also the indirect effect of the sun heating physical surfaces, such as streets and buildings. In cities, where the urban heat island effect can raise the temperature by as much as 20F (12C), the simple act of painting roofs white can reflect enough sunlight to reduce the heat by a few degrees.

A dozen US cities require or encourage light-colored roofs on new construction, and in August dark roofs were banned in the south-west suburbs of Sydney, Australia, where new rules mandate that every backyard must have a tree.

It’s necessary to tackle the fundamental problems that make cities hotter, said Turner. But “we will need some air conditioning because [without it], you can’t get your core temperature cool enough if you’re exposed to really extreme heat”. That’s especially important, she stressed, for vulnerable people, including outdoor agricultural and construction laborers, children, elderly people and low-income renters, who need not only access to cooling centers on the hottest days, but air conditioning in their homes. (Most places in the US, she said, have laws limiting how cold an apartment can be, but none that prevent landlords from letting homes get dangerously hot.) 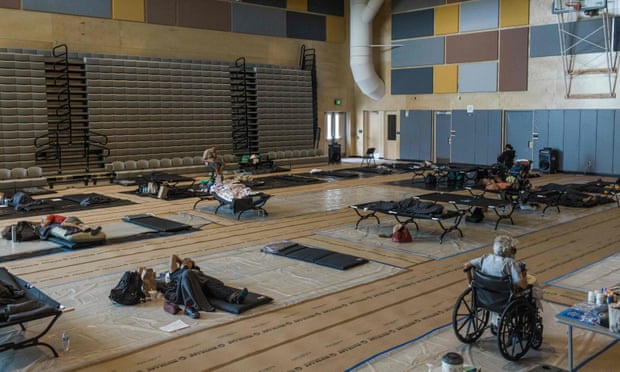 The Cooling prize targets air conditioning – that last, necessary element. “If your living space is a very small apartment in a mid-rise tower and you have six members of the family living there and the temperature in the summer is peaking out at about 120F, 130F, you’re not gonna say: ‘Well I need to insulate my apartment, or I need to put some shading in,’” said Campbell. “You’re thinking, ‘I need a damn conditioner so we can all sleep at night.’”

People are going to keep buying air conditioners, he said, so we need to offer them better, safer, cleaner devices – and policymakers must impose regulations that take less efficient options off the table: “We can do better than this. And we’re doing a disservice to our citizenry when we let them buy something that is so expensive to operate, and so polluting that cooling is actually adding to the warming of the planet.”