It’s one of the biggest industries in the world, consumes more than 10% of fossil fuels produced globally and emits an estimated 3.3 gigatons of greenhouse gas emissions a year, more than India’s annual emissions – yet the chemicals sector has largely slipped under the radar when it comes to climate.

This sprawling industry produces a huge range of products, many of which support other industries – pesticides for agriculture, acids for mining, lubricants for machinery, ingredients in cleaning agents, cosmetics and pharmaceuticals and plastics.

While the industry has an important role to play in moving to low-carbon economies – providing coatings for solar panels, lightweight plastics to reduce vehicles’ energy consumption and insulating materials for buildings – it’s also hugely carbon intensive and predicted to become more so. Oil companies have been betting on chemicals as a way to remain profitable as the world pledges to turn away from fossil fuel energy. The International Energy Agency predicted that petrochemicals could account for 60% of oil demand in the next decade.

The chemicals sector is the largest industrial user of oil and gas but it has the third-largest carbon footprint – behind steel and cement – because only about half of the fossil fuels that the industry consumes are burned for their energy. The rest is used as feedstock for products such as plastics with the emissions released only when these products reach the end of their lives, for example, when waste plastic packaging or an old mattress is incinerated.

Lowering the industry’s emissions is possible but technically daunting. Plus this large, complex industry, which supports millions of jobs worldwide, has significant political and economic clout. “They’ve become a bit of an untouchable sector for many politicians,” said Jan-Justus Andreas, who leads industrial policy at the Norwegian environmental non-profit Bellona Europa.

Yet the chemicals industry is finding itself increasingly under scrutiny – both from nations that need to meet ambitious emissions reduction targets and from researchers, scientists and campaigners calling on the industry to cut its polluting products.

Moving away from dirty energy

One way to lower emissions is to focus on chemical plants – improving efficiency and switching to low-carbon energy.

Most of the industry’s direct carbon dioxide emissions come from burning fossil fuels to power chemical transformations, many of which take place at high temperatures and pressures. These emissions could be significantly reduced if the industry moves away from dirtier fuels such as coal.

If renewable wind or solar energy is available, certain chemical processes that are already driven by electricity, such as the production of chlorine used to make other materials such as PVC pipes or solvents like chloroform, could immediately become low carbon. And chemists continue to look for ways to power traditionally heat-driven chemical transformations with electricity instead – such as the process of converting nitrogen to ammonia, mostly used for fertilizer, which requires temperatures of about 500C (932F). 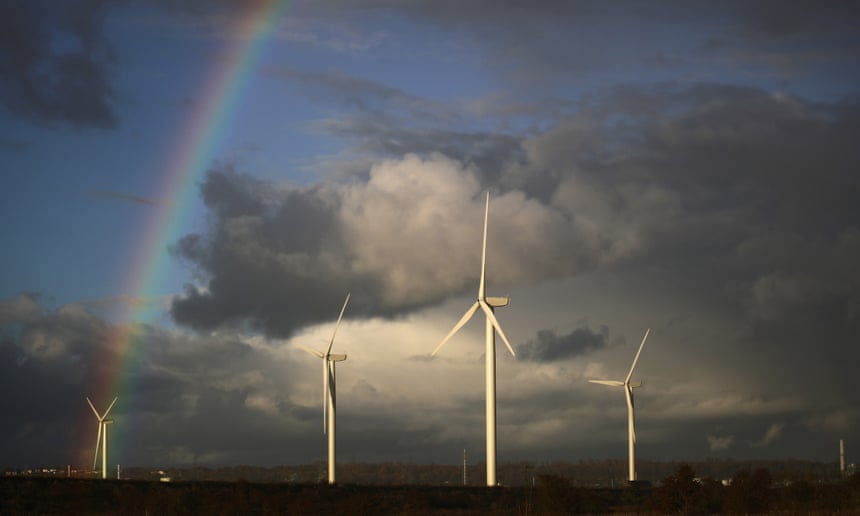 Wind turbines on Ince Salt Marshes near chemical and manufacturing plants on the River Mersey estuary. Chemists are working to use renewable energy to drive some industrial chemical processes. Photograph: Christopher Furlong/Getty Images

While chemical companies are counting on efficiency improvements and investing in renewable energy to meet their climate goals, many chemical products themselves cannot be decarbonized because they are made of carbon, said Martin Scheringer, an environmental chemist at the public research university ETH Zurich.

Removing fossil fuels from the raw materials used to create carbon-based chemicals and materials is crucial, said Jonatan Kleimark of the non-profit ChemSec. Kleimark likens products made from fossil fuels – such as clothes, toys and paints – to a carbon debt, because the carbon embedded within them will only be emitted in the future. “The longer we wait to change, the larger debt we will build, and that will be very hard to do something about if we don’t start,” Kleimark said.

To stop adding to this debt, chemicals and materials could be made with sources of carbon that are already above ground, such as plants. Bioplastics – made with plant materials such as sugar, corn or seaweed – are booming, for example, as companies and scientists try to remove fossil fuels from plastic production.

Another idea is to turn waste products into raw materials for the chemical industry. Chemists have been using agricultural waste or waste plastics – even the ultimate waste material, carbon dioxide – as feedstocks. A Berlin-based startup, Made of Air, is attempting to create plastics from wood waste, while an Icelandic company, Carbon Recycling International, turns captured carbon dioxide emissions into methanol, used in fuels and for making other chemicals such as formaldehyde.

‘Why don’t you deal with someone else first?’

But all these ideas – especially those involving a shift in feedstocks – are very hard to implement.

Technologies to turn agricultural or plastic waste into new chemicals are still unproven on a large scale and using carbon dioxide as a raw material will require vast amounts of zero-carbon energy.

Manufacturers making products with plants rather than fossil fuels need to ensure that they do not create new problems through deforestation, destroying wildlife habitat, raising food prices or increasing the use of water or pesticides. Biomass resources also tend to be more spread out, whereas traditionally, chemical plants stay close to where fossil fuel resources are easily accessible. 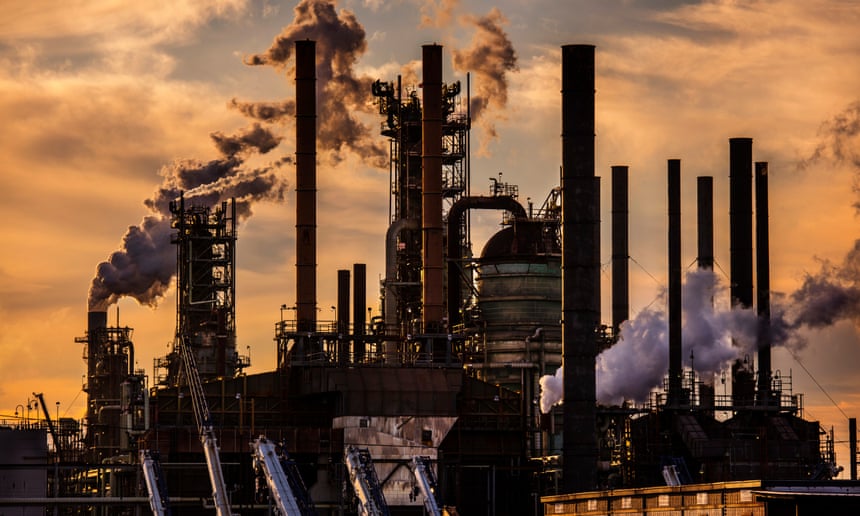 “With renewable feedstocks, you will need to reestablish new supply chains,” said Zhanyun Wang, a senior scientists at ETH Zurich. In addition to delivering a steady stream of renewable raw materials to chemical plants, the new supply chains would need to be competitive with well-established ones making products from fossil fuels at low prices, Wang said.

The clean power infrastructure requirements alone are tremendous. Electrifying Europe’s chemicals sector would require 4,900 terawatts of renewable electricity, according to an estimate by the European Chemical Industry Council, almost double the total amount of electricity Europe generated in 2019.

“If you are a lobbyist for the chemical sector, showing those numbers helps you to put your head down again and say, ‘Look, firstly I’m too important and valuable, and secondly, it’s really, really difficult to deal with me, so why don’t you deal with someone else first,’” Andreas said.

Currently, that someone else refers to the cement and steel industries, said Andreas. The internal competition between the three industries to avoid scrutiny is unhelpful, he said, because they could benefit from developing an industrial strategy together.

The exhaust gases from steel and cement plants could serve as valuable feedstocks for chemical plants. All three industries need large-scale renewable electricity or carbon capture facilities, which require significant investment. The financial risks involved in building these new facilities could be mitigated, Andreas said, if the new facilities serve multiple operations instead of a single steel mill or fertilizer plant.

But with less than 30 years to 2050, time is short. If there are no delays, typically, it takes about seven years for companies to get a new process up and running, Dell said. “We have to move a lot faster.”

One important, but neglected, lever for cutting emissions from the chemical sector is to simply use and produce fewer chemicals. “That would lead very directly to a reduction in CO2 emissions and also reduce the toxification of humans and the environment,” Scheringer said.

The overuse of materials such as plastics, fertilizers and other synthetic chemicals has caused devastating effects on ecosystems and human health. Plastic debris chokes waterways and wildlife, fertilizer-laden runoff from fields can cause algal blooms and create dead zones in coastal areas. 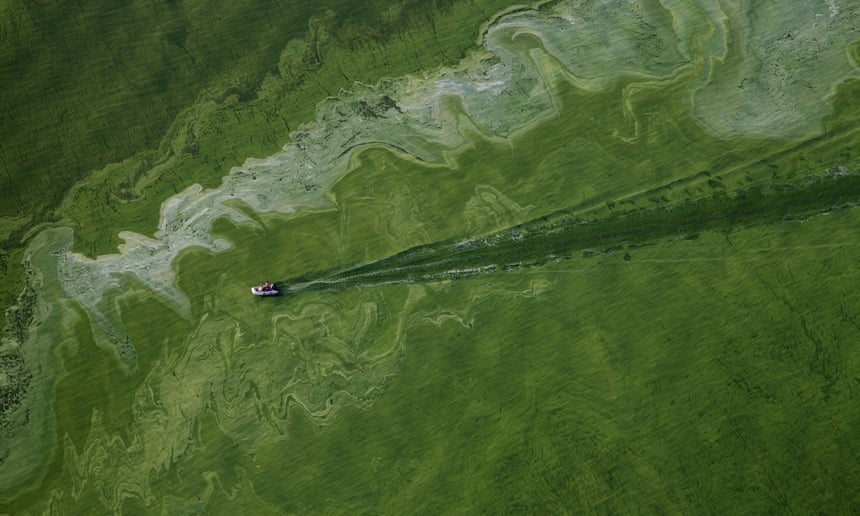 An algae bloom on Lake Erie near Toledo, Ohio. The causes of these blooms vary but they are increasingly being linked to fertilizer runoff. Photograph: Aurora Photos/Alamy

These impacts have led policymakers and consumers to cut back – for instance, many cities and countries now have prohibitions on some single-use plastics. “It’s an attempt to reduce plastic itself as a pollutant in the landscape, more than concerns about greenhouse gases, but we can make simultaneous progress on more than one front,” said Dell.

Studies have also found that being more precise about applying fertilizer could save farmers money and keep greenhouse gases out of the atmosphere.

It is less straightforward to cut back on some of the chemicals that are used to make consumer products, but Scheringer, Wang and others have proposed a way to start. Alarmed by the dangers of some cancer-causing PFAS, also known as “forever chemicals”, researchers have suggested eliminating PFAS from their “nice-to-have” applications – such as nonstick cookware, long-lasting mascara, or water-repellent surfer shorts that don’t need the level of high performance that “forever chemicals” confer.

The researchers recommend that “forever chemicals” be used only in really important products, such as protective gear or medical devices that save lives. The same philosophy could be applied to identify and eliminate other chemicals that have been unnecessarily formulated in products, such as adding antimicrobials to soaps that can already kill germs.

Simplifying the chemical ingredients in products has an added benefit: they are easier to take apart or recycle when they are no longer useful. Wang points to the example of carbon black, the chemical used as a pigment in food takeout boxes. The pigment serves no technical function other than providing colour and it is used because food looks more appealing set against a black background, Wang said. But the pigment also means the takeout boxes are invisible to devices that use light to sort plastics at sorting facilities, making them impossible to recycle.

The chemical sector is producing more than consumers need, Wang said: “The business model is driven by how many chemicals you sell, it’s not necessarily driven by the added societal value of the chemical.”

But the “enormous demand” for products is also a big driver – and perhaps harder to address, said Kleimark. “We’re standing in front of a really, really big challenge because there we cannot rely on technologies, but on changing the way we do things today.”