Hannah Steiner
marine wildlife conservation and environmental activist
The U.N. Convention on Biological Diversity (CBD) Secretariat unveiled the first draft of a new Global Biodiversity Framework. The framework aims to list actions through 2030 to protect and preserve nature and the services it provides to people.

The new draft contains 21 targets and 10 milestones for 2030 to enable ‘living in harmony with nature’ by 2050. The Global Biodiversity Framework guides actions on conservation and protection of at least 30% of the earth’s land and oceans.

CBD is a nearly 30-year-old international treaty dedicated to the conservation of biodiversity. The Convention further emphasizes the equitable sharing of the benefits that are provided by using genetic resources. With 196 Parties, the Convention has major universal participation.

The draft proposes four goals to guide humanity to live in harmony with nature. This vision was adopted back in 2010 by the CBD’s 196 member parties. All the goals have 10 milestones that need to be achieved by 2030.

Goal A is to enhance the integrity of all ecosystems by around 15%. Through this, the aim is to support healthy and resilient populations of species with the rate of extinction slashed by ten times. It calls for the maintenance of around 90% of genetic diversity. Some of the milestones under this include increase in the net gain in the area and integrity of natural systems by 5% and the risk of extinction decrease by 10%.

Goal B calls for respecting and assisting nature in its contributions to people. This can be achieved through conservation and sustainability efforts. One of the milestones is to ensure the long-term sustainability of those that are declining, aligning with the relevant SDGs.

Goal C emphasizes to justly share genetic resources along with a sufficient increase in financial and non-financial terms. Those that have traditional knowledge should have increased monetary benefits and be made an active part of research and development.

Goal D draws attention to the barriers between financial and other means of implementation, and other steps required to meet the 2050 vision, calling for a close in these gaps. Necessary financial resources need to be deployed to cover the financing gap of US$700 billion per year by 2030. In addition, capacity-building and development, technical and scientific cooperation, and technology transfer should be made available.

“Urgent policy action globally, regionally and nationally is required to transform economic, social and financial models so that the trends that have exacerbated biodiversity loss will stabilize by 2030 and allow for the recovery of natural ecosystems in the following 20 years, with net improvements by 2050,” executive secretary of CBD, Elizabeth Maruma Mrema said in a statement. 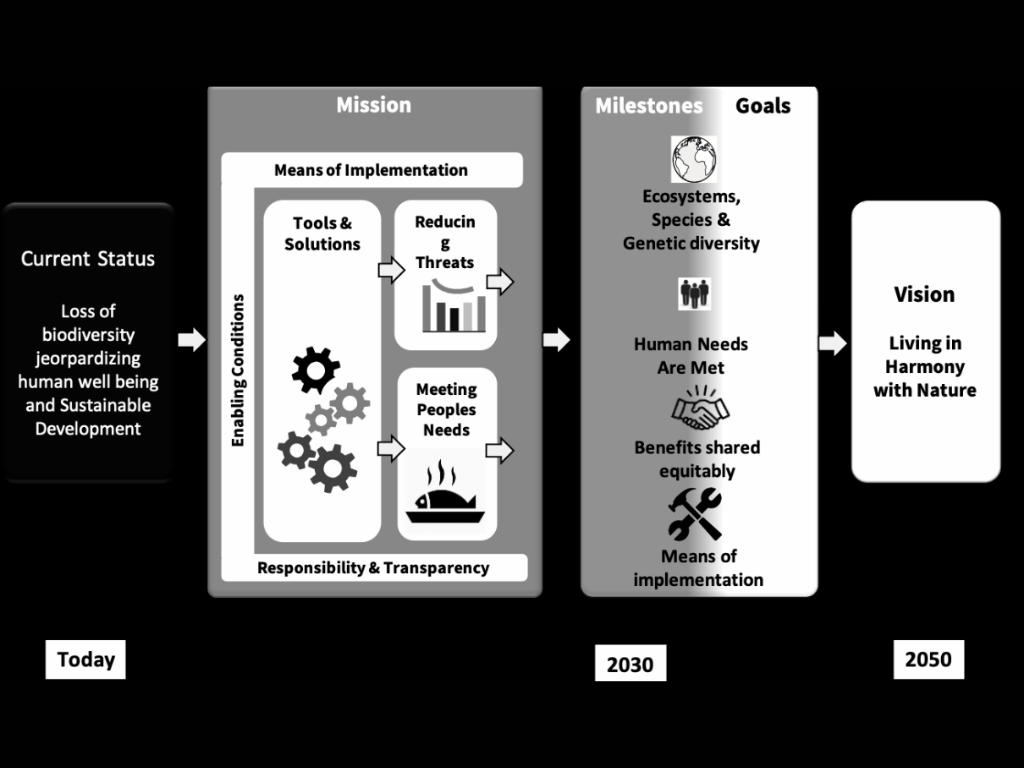 Theory of change of the framework. Source: CBD

Urgent policy action globally, regionally and nationally is required to transform economic, social and financial models so that the trends that have exacerbated biodiversity loss will stabilize by 2030

The framework further lists 21 related “action targets” for 2030 some of which are mentioned below.

The first area is to reduce threats to biodiversity by ensuring that 20% of degraded freshwater, marine, and terrestrial ecosystems are being restored. One of the other targets focuses on conserving 30% of land and sea areas through an equitable system and undertaking area-based conservation measures to achieve the same.

Nutrients loss and pesticide use should be slashed by half and two-thirds respectively with a further complete halt on plastic waste. Each year, nature-based contributions should be made towards climate change mitigation of at least 10 GtCO2e.

Meeting people’s needs through sustainable use

The second area is dedicated to fulfilling people’s needs through sustainability. Some of the benefits are nutrition, food security, medicines, and livelihoods for those that are vulnerable.

Agriculture, aquaculture, and forestry should be managed in a positive way by conserving biodiversity and making the production systems resilient.

Mrema added: “The framework aims to galvanize this urgent and transformative action by Governments and all of society, including indigenous peoples and local communities, civil society, youth and businesses and financial institutions. It will be implemented primarily through national-level activities, supported by subnational, regional and global-level actions. This is a global, outcome-oriented framework for the Convention’s 196 Parties to develop national and regional goals and targets, to update national strategies and action plans as needed, and to facilitate regular monitoring and review of progress at the global level.”

To help execute the tools and solutions, it is important to either redirect or ditch harmful incentives that are in place for biodiversity by slashing them by US$500 billion each year. This takes into account the most hazardous subsidies and instead pushes to opt for positive or neutral incentives.

The framework aims to galvanize this urgent and transformative action by governments and all of society, including indigenous peoples and local communities, civil society, youth and businesses and financial institutions. It will be implemented primarily through national-level activities, supported by subnational, regional and global-level actions

The framework says financial sources should be increased annually to reach the US$200 billion mark. Increases of US$10 billion per year should be allocated in international financing to developing countries along with the mobilization of domestic resources.

To ensure that all financial flows and activities are in sync with biodiversity, it is necessary to integrate the values of biodiversity in policies, regulations, poverty reduction strategies, etc. at the government level as well as across all sectors.

The framework has been in development for over two years and the final draft is slated to be presented at CBD’s next meeting at COP15, scheduled for October 11-24, and set to take place in Kunming, China.