A fast-moving wildfire fueled by dry Pacific winds engulfed houses, roads and wooded areas near Los Angeles on Friday morning, killing at least one person and forcing some 100,000 residents to flee their homes, officials said.

The so-called Saddleridge fire had spread to more than 4,700 acres about 25 miles (40 km) northwest of downtown Los Angeles by Friday morning, moving at a rate of 800 acres per hour, the Los Angeles Fire Department said at a news conference.

A man died of cardiac arrest while trying to fight the fire, which erupted just days after power cuts were ordered across the state to prevent wildfires, authorities said.

It is still completely uncontained and its cause is under investigation.

Some 23,000 homes and around 100,000 residents were under mandatory evacuation orders Friday morning. The orders were not expected to be lifted for at least a few days, fire department officials said. 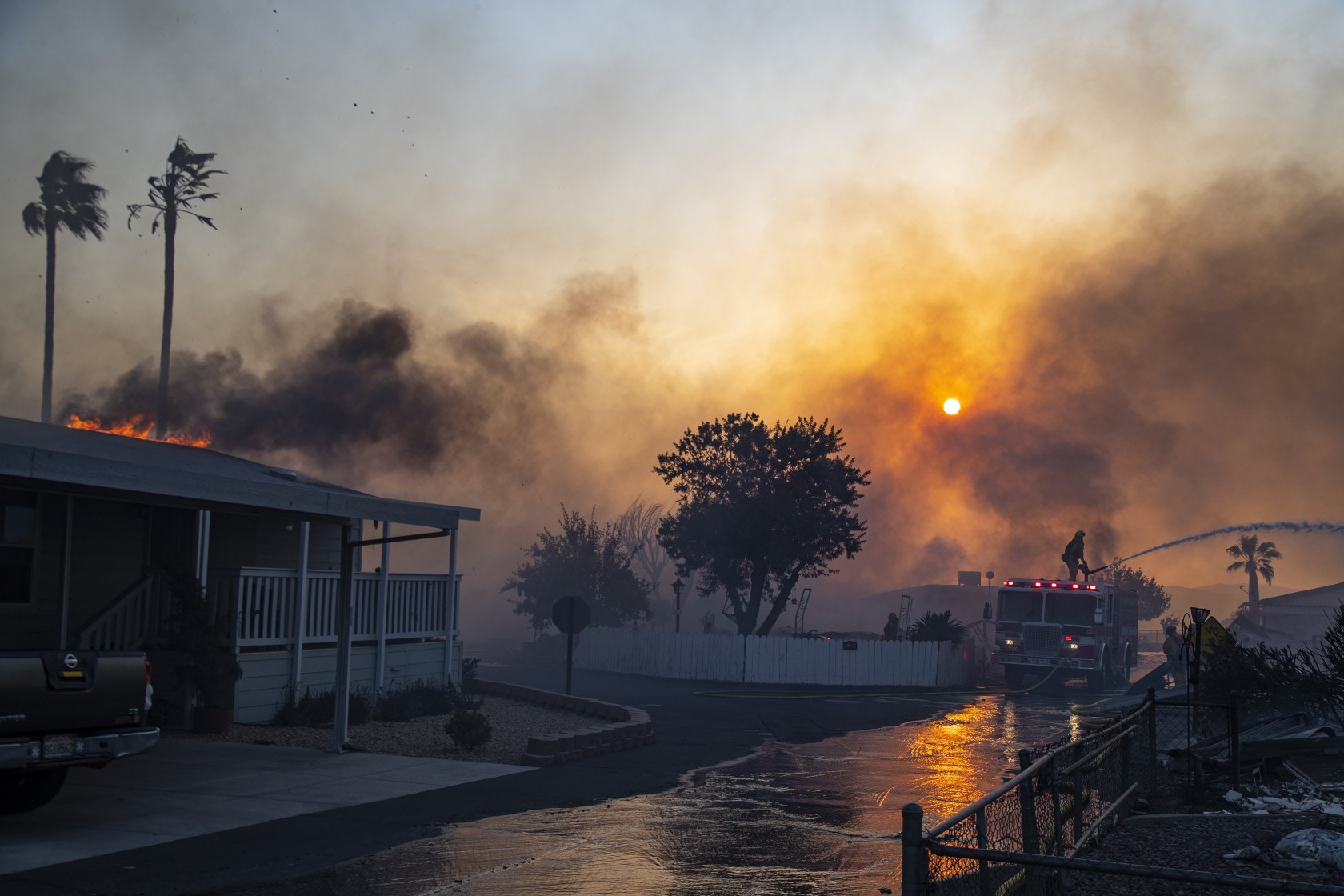 “This is a very dynamic fire,” Los Angeles Fire Chief Ralph Terrazas told reporters. “Do not wait to leave.”

The latest blazes, among about 275 wildfires that have broken out so far this year, come one year after the deadliest and most destructive fire season ever recorded in California, with about 100 residents and firefighters killed in 2018.

The Federal Emergency Management Agency (FEMA) said Friday it had authorized the use of federal funds to assist California in fighting the Saddleridge Fire.

Authorities were also fighting overnight to contain the Sandalwood Fire in Riverside County, which had scorched about 820 acres near Calimesa, about 70 miles east of downtown Los Angeles by Friday morning. It was only 10% contained, Riverside County Fire Department (RCFD) officials said.

In San Fernando Valley, the Saddleridge Fire prompted several highway closures and had already destroyed at least 25 homes in two neighborhoods on the northwest outskirts of Los Angeles, where authorities called in bulldozers, helicopters and other heavy equipment to try to contain it.

The Sandalwood fire, named after a local landmark, erupted on Thursday afternoon when a garbage truck dumped burning trash that spread onto vegetation, the RCFD and California Department of Forestry and Fire Protection, or Cal Fire, said in a statement.

Much of Northern California, from San Francisco to the Oregon border, remained under a state “red flag” fire alert Friday.

Firefighters have been able to quickly contain most of the other blazes the state, but dry and windy conditions prompted Pacific Gas and Electric Co to cut power to about 730,000 customers, a move California Governor Gavin Newsom blamed on years of mismanagement by the utility.

By late Thursday, PG&E announced it had restored power to more than half of those affected, and about 312,000 remained without electricity.

More than 250,000 California households and businesses were without power on Friday morning, PowerOutage.US reported, nearly all of them customers of PG&E in northern California.

PG&E filed for bankruptcy in January 2019, citing potential civil liabilities in excess of $30 billion from major wildfires linked to its transmission wires and other equipment.

As winds moved south Friday, a power cutoff similar to PG&E’s was underway at Southern California Edison, which warned more than 173,000 customers they could face outages.