Rebecca Herbert
Climate Activist
A draft report by the United Nations Intergovernmental Panel on Climate Change warns that unless drastic and immediate action is taken to limit greenhouse gas emissions and keep global temperatures from rising further, life on earth is poised for a catastrophic reckoning.

The 4,000-page draft, a copy of which was obtained by Agence France-Presse, states that mankind may have already missed its opportunity to keep the climate from passing a series of thresholds that will further spur the warming of the planet.

“Life on Earth can recover from a drastic climate shift by evolving into new species and creating new ecosystems,” the report says. “Humans cannot.”

The thresholds, or feedback loops, include the melting of permafrost, which in turn releases methane gas into the atmosphere. This further amplifies the greenhouse gas effect, pushing temperatures even higher. As a result of the melting of the polar ice caps and loss of sea ice, the earth absorbs far more of the sun’s ultraviolet radiation and heat, which further contributes to ice melt. 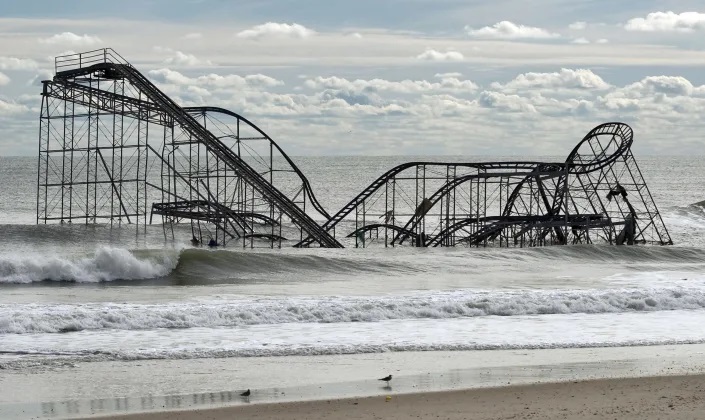 A damaged roller coaster in Seaside Heights, N.J., on Nov. 1, 2012, after Hurricane Sandy. (TPX Images of the Day)

Since preindustrial times, the earth has warmed by 1.1 degrees Celsius. In its landmark 2018 report, the IPCC warned of dire consequences should humankind fail to keep average global temperatures from rising higher than 1.5 degrees Celsius. But most climate scientists now believe that meeting that goal will be all but impossible, given the rate at which emissions continue to rise.

The draft report, which is being prepared ahead of the November meeting of world leaders at U.N. climate talks in Glasgow, Scotland, also cautions that 1.5 degrees Celsius of warming will require humans to adapt in ways almost unimaginable just decades ago.

"Even at 1.5 degrees Celsius of warming, conditions will change beyond many organisms’ ability to adapt,” the report states. “Current levels of adaptation will be inadequate to respond to future climate risks.”

The costs of adapting to this new reality will be steep, especially in parts of the world where resources are already scarce.

“Adaptation costs for Africa are projected to increase by tens of billions of dollars per year with warming greater than two degrees,” the report states.

In another tipping point, the Amazon rainforest basin, where flora absorbs carbon dioxide and helps keep temperatures from spiking, could soon be transformed into a savannah, according to the report.

The report also notes that coastlines around the world already experiencing sea-level rise will be forced to deal with uninhabitable conditions as tropical cyclones continue to strengthen. Heat waves like the ones gripping the western United States, and wildfire seasons that continue to set records around the world, will also only worsen over time.

“The worst is yet to come, affecting our children’s and grandchildren’s lives much more than our own,” the report says.

The window of opportunity to stave off dire consequences is quickly shutting, the report warns.

“We need transformational change operating on processes and behaviors at all levels: individual, communities, business, institutions and governments,” it says, adding, “We must redefine our way of life and consumption.”